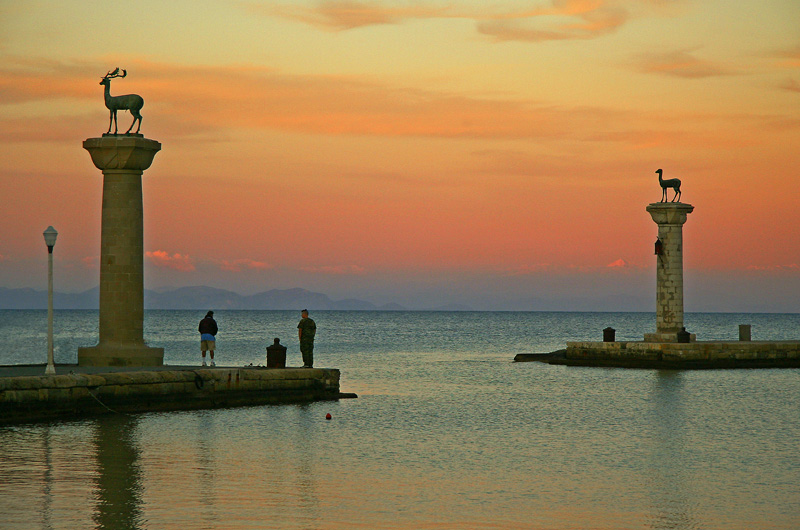 The  British couple was obviously surprised when they were asked to pay for their meal in a local restaurant in Rhodes, the Dodecanese Greek island . The  waiters and the restaurant owner realized that the  British couple  thought their all-inclusive holiday deal covered an entire island, probbly due to the austrity crisis that has hit Greece .

After completing their meal ,the middle-aged pair tried to leave the tavern, situated outside of their hotel in Rhodes, and showed  their resort wristbandsto the waiters when htey were  asked to pay.The owner of the restaurant in the Greek island's Old Town had to explain them in detail, that Rhodes island ( the whole of it ) is not ... an all inclusive package .The restaraunt owner did his best to make clear to the british tourists n that the all-inclusive deal only applied to their hotel - and not  the 50-mile long area around it, that is the whle island of Rhodes . According to the local newspaper Dimokrati, the couple had genuinely believed they could eat without paying at the establishment, a single euro more than their package price.

Finally, they agreed to pay for the meal after the owner explained that the restaurant in tourist hotspot, Hippocrates Square, was not covered by their hotel package.But the owner revealed to the press that this was not the first time of similar misundestandings by tourists vising the island of Rhodes. Local businesses, indeed,  have suffered when situated near all-inclusive hotels in Greece, the local press writes.

.There are hundreds of all-inclusive hotels on the Greek islands and on the mainland in Crete, Corfu, Cyclade islands and more. which  are popular with families on a budget, who know , according to their tour opertor who sold them the package,  that once they have paid, they will not face extra bills for meals, drinks and entertainment. But when arriving in Greece, they understand their resort is simply their hotel area, not entire ilslands, as recently happened.

Visiting the local traditional local restaurants and tavernas, though, becomes more and more popular, even among all- inclusive holidaymakers, Andrew Brown, of the Uk Post Office Travel Money, said to the Dailymail:

"'The all-inclusive holiday generation is now showing clear signs of having more realistic expectations and no longer assume everything to be included in the package.'Most holidaymakers now prefer to get out and about, spending money in local restaurants and cafes where they will get a real flavour of their holiday resort.'That is good news for local businesses but it means that holiday cash may be stretched.'