The Global Health Security Agenda, as a first line Presidential Priority, signed last day before elections by Obama himself

On Friday, November 4, a new executive order was signed titled “Advancing the Global Health Security Agenda to Achieve a World Safe and Secure from Infectious Disease Threats,” giving the United States government, military and other worldwide partner organizations new powers to respond to what they deem as “biological threats” that may potentially emerge.

Usually referring to disease outbreaks or perhaps even biological weapons, the nearly 2,500-word document (which can be found on WhiteHouse.gov by clicking here) is vague about what such a plan may entail. But speculation is that it could involve some sort of major medical or vaccine-driven response — with no mention as to whether consent of the people will be included.

While the eyes of the world are focused intently on the 2016 presidential election, the White House has made a dramatic, potentially game-changing move, the marchagainstmosnanto,com  wrote

Describing itself as an organization of global partners, stakeholders and organizations with the goal “to advance a world safe and secure from infectious disease threats,” the Global Health Security Agenda is the central benefactor of the new executive order.

The GHSA says it was created to “bring together nations from all over the world to make new, concrete commitments, and to elevate global health security as a national leaders-level priority.”

What’s particularly interesting about this organization, is that it will have the support of the United States Department of Defense if necessary; in other words, the executive branch of the government that directs all activities related to the armed forces.

Section 1 of the order, ‘Policy,’ lays out what the focus will be for the response plan

“No single nation can be prepared if other nations remain unprepared to counter biological threats; therefore, it is the policy of the United States to advance the Global Health Security Agenda (GHSA),...

Potentially backed by the U.S. military if necessary, the order includes support from major worldwide organizations.

“The roles, responsibilities, and activities described in this order will support the goals of the International Health Regulations (IHR) and will be conducted, as appropriate, in coordination with the

and other relevant organizations and stakeholders.”

“To advance the achievement of the GHSA targets and to support the implementation of the IHR within partner countries, each executive department, agency, and office (agency) shall, as appropriate, partner, consult, and coordinate with other governments, international financial institutions, international organizations regional organizations, economic communities, and nongovernmental stakeholders, including the private sector.”

“The DOD may ‘facilitate implementation and coordination of Department of Defense programs to further the GHSA, as well as provide technical expertise to measure and evaluate progress in countries the United States has made a commitment to assist…’”

The lengthy document begins by stating on behalf of President Barack Obama, “by the authority vested in me as President by the Constitution and the laws of the United States of America, it is hereby ordered as follows,” and signed by the president himself at the end. 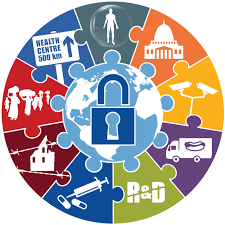 The Tom Frieden  Presentation for GHISA , the  Director of the Centers for Disease Control and Prevention (CDC) during the days of the H1N1 Pandemic

In the swirl of world events that range from economic uncertainty to continuing unease about terrorism, President Obama took an important step today to strengthen our ability to protect people in the United States and around the world from disease outbreaks.

President Obama signed an executive order which cements the Global Health Security Agenda (GHSA) as a national, presidential-level priority and establishes the United States as a committed, long-term catalyst for achieving the promise and protections that GHSA holds.

This is good news.

In today’s increasingly interconnected world, distance no longer protects us from disease.

The President’s action ensures US leadership and supports strengthening the ability of all countries to detect outbreaks at the earliest possible moment, to respond to them quickly and decisively, and prevent outbreaks wherever possible.

The executive order also confirms the value of CDC’s deep involvement in health security even before the formal GHSA launch in early 2014.

I’m proud of CDC’s work helping countries become better prepared to protect their own people and thereby also protecting the rest of the world, including the United States.

In its first two years, our initial investment has yielded substantial, measurable results in dozens of countries from Guinea to Vietnam.

Vital partnerships with those countries have greatly improved

These are all core competencies that every country needs to have, for their own sake and the sake of the world.

CDC experts and other partners have also worked closely with public health leaders to rigorously, independently, and transparently evaluate the public health systems.

This effort, known as a Joint External Evaluation, is a critical “stress test” that provides, for the first time ever, a clear picture of each country’s strengths and weaknesses - and highlights the changes and upgrades needed to meet GHSA’s stringent standards for protecting people’s health.

Results of these evaluations, which will be done for more than 50 countries within the next few months, are openly available here.

Even the smallest gap allows disease to spread and grow. With the ease and speed of global travel and global commerce, the need to stop health threats where they emerge and before they spread is more important than ever.

GHSA now has firm commitments from 55 nations and has been joined by international and nongovernmental organizations as well as private sector stakeholders.

It establishes ambitious goals with standards that demand accountability and which make the world safer.

On-the-ground benefits include better laboratories that provide more reliable and consistent results, supported by a cadre of highly trained “disease detectives” who are the front line of the crucial early warning system to detect outbreaks and stop them before they spread widely.

GHSA also calls for and has helped countries establish Emergency Operations Centers to detect and fight outbreaks, improving collaboration among responders, and providing the public with accurate and timely information.

The executive order signed today demonstrates the importance of GHSA to the United States and establishes mechanisms that ensure the effort remains in the line of sight of the President and senior advisors.

All of us deserve to be healthy and safe and secure from disease outbreaks. Today’s action by the President moves us closer to that goal.