Schwarzenegger so inspired by Ancient Greece, and his broze heroic self Like sports stars today, successful athletes in ancient Greece were held up as heroes, and often considered larger than life. Heroes and athletes were commemorated in much the same way.

The magnificent victory odes of lyric poets such as Pindar and Bacchylides in the fifth century BC constantly invoke the great heroes of the past — Herakles, Perseus, Achilles, among others — in celebrating the achievements of victorious athletes.

Statues of athletes were set up at the venues where they won their victories, often made by the same sculptors who depicted heroes; Lysippos, who sculpted Herakles many times, also depicted athletes such as Agias, Polydamas (about whom, more below) and many others.

As early as the Iliad Homer establishes the hero-athlete nexus in the famous epithet ‘swift-footed’ for the most formidable warrior of all, Achilles, whose running down of Hektor the poet compares to a horserace (22.159-66).

Much of the book 23 of the Iliad focuses on scenes of athletic activity by heroes such as Odysseus,

Diomedes and Ajax — chariot-racing, wrestling, boxing, sprinting, among others — at the funeral games of Achilles’ fallen comrade, Patroklos.

Apart from the onsite celebrations which included awarding of crowns of olive at Olympia, or laurel at Delphi, the heroising of successful athletes continued with rituals designed to milk their glory for all it was worth on their return home. These could include vast processions, huge amounts of money

So far so good, you might think. But from an early stage we hear that Greek athletes were overrated, over-indulged and a drain of the state’s coffers.

Plutarch (Sol. 23.3) tells us that the Athenian statesman Solon in the early sixth century BC restricted the amount of money the state could grant successful athletes: 500 drachmas for Olympic, 100 to Isthmian champions.

At his trial Socrates claimed that he deserved sitesis ahead of Olympic athletes who, he said, bring no real joy to the polis of Athens (Plato, Apology 36d-e); but, instead of free meals, this self-professed gad-fly of Athens ended up getting only a free drink in the form of hemlock…

Aristotle (Pol. 1338b-39a) sees athletic regimen as not conducive to a sound mind-sound body balance; and the Achaean general Philopoimen in the third century BC saw athletics as positively inimical to military training due to the excesses of an athlete’s lifestyle of over-sleeping and over-eating (Plut. Phil. 3.2-4).

The prestige of athletes, however, remained undiminished in the Greek world.

As with so many aspects of Greek culture, the nuances in ancient attitudes to heroic athletes provide us with a lens through which we can more acutely perceive our own preoccupations. For the Greeks and ourselves, sport and big-name athletes continue to grip the popular imagination, even if,  not always for the most uplifting reasons. 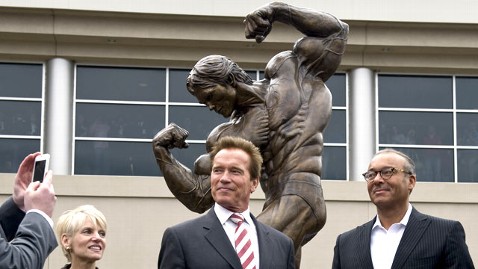 Photographs of former California governor Arnold Schwarzenegger grinning next to a self-commissioned, larger-than-life bronze statue of himself in his body-building days may be eyebrow-raising, but social scientists say that Schwarzenegger is simply following a trend laid down by thousands of years of human history.

"It's the kind of thing that we really have been doing since the ancient Greeks," archaeologist and historian Lemont Dobson of Drury University in Missouri said in a phone interview with LiveScience. "You get a wealthy, powerful, political social leader who is — oh, God, I just saw the bronze statue."

Okay, so the representation of a young, flexing Schwarzenegger in a Speedo-like swimsuit, veins bulging, is not exactly Lincoln Memorial-style statuary. Commissioned by Schwarzenegger as one of a trio of identical statues, the bronze bodybuilder now resides at a museum dedicated to the ex-governor in his hometown of Thal, Austria. Schwarzenegger attended the inaugurating of the museum today (Oct. 7), according to the AP.

Psychology experts concede that commissioning an 8- to 9-foot (3-meter) tall statue of oneself is likely a symptom of some level of egotism. But the rich and famous have long lionized themselves, and Schwarzenegger is a guy with a lot of name recognition.

"This is not some guy who lives in the village who made a statue of himself," said Josh Klapow, a psychologist at the University of Alabama in Birmingham. "This is one of the most well-known athletes, actors and politicians in the world … Sometimes the actions are proportional to the individual."

The history of self-promotion

Schwarzenegger is far from alone in his apparent desire to see himself immortalized in his best light.

"From ancient Chinese emperors creating terra cotta warrior armies to the pharaohs and their pyramids to the ancient Greeks creating statues to commemorate their athletic prowess to Donald Trump building skyscrapers across the country with his name on them, I think as human beings, we just can't help ourselves," Dobson said.

Traditionally, Dobson said, monuments have worked to communicate images of power, valor and success to the little people. [Album: The 7 Wonders of the Ancient World]

"It certainly is a PR campaign," he said.

"Basically, by setting up this mythos of divine ancestry and lineage, your future descendents can benefit greatly from that," Kruger told LiveScience. "I don't know if Arnold is consciously recognizing this, but that has been the effect throughout human history."

Schwarzenegger may also have less self-centered reasons for commissioning the statue and participating in the museum dedication, Kruger added. He might be motivated to give back to his small hometown by providing an attraction to bring in tourism dollars.

Even the physicality of the Arnold statue has roots in history. In the early 1800s, for example, sculptor Antonio Canova created a likeness of a svelte, nude Napoleon in the guise of the Roman god Mars — though Napoleon himself disliked the statue and banned it from public view.

In Schwarzenegger's case, the muscle-bulging statue isn't much of an exaggeration, Klapow said.

"If you're going to make a statue of yourself that is going to appear in public, I don't think it's unreasonable to have that statue represent you in the most favorable light," Klapow said. "And Arnold Schwarzenegger in his most favorable light is one of the most muscle-bound individuals on the face of this Earth."

But with the glory of fame and self-aggrandizement come the slings and arrows of mockery from those less fortunate.

"I can see someone in ancient Rome scoffing and rolling their eyes at the latest statue of Caesar, going, 'Oh, God, here he goes again,'" Dobson said. "Periodically, people would deface these kinds of things. We didn't invent graffiti, and we didn't invent mocking the rich and powerful."