Greeks, poor made you the 'Pseudo Gauche'*, consider Lean LiVing (= in Greek, a new Louis Vuitton)

It was more than half a century ago. Money was not  flowing among  the middle class, but Greeks had dreams, everyday joy in their lives, and were sharing the rainbow of their very blessed land. With the world , wiyh their beloved ones, and with their land itself

Introducing himself, first time to the wide Greek audience through the mass TV, Yiannis Varoyfakis, reminded to all the living generations of the Greeks, that they were living with dignity in the old days, under a lean lifestyle which made life more creative, prosperous and finally happier. The were close to the land, they were attached to their families, they were investing to their kids' education, -each family , but all who could afford it-.

Finally, Varoufakis concluded, "Growth is not meant by Porche Cayenne and credit cards." 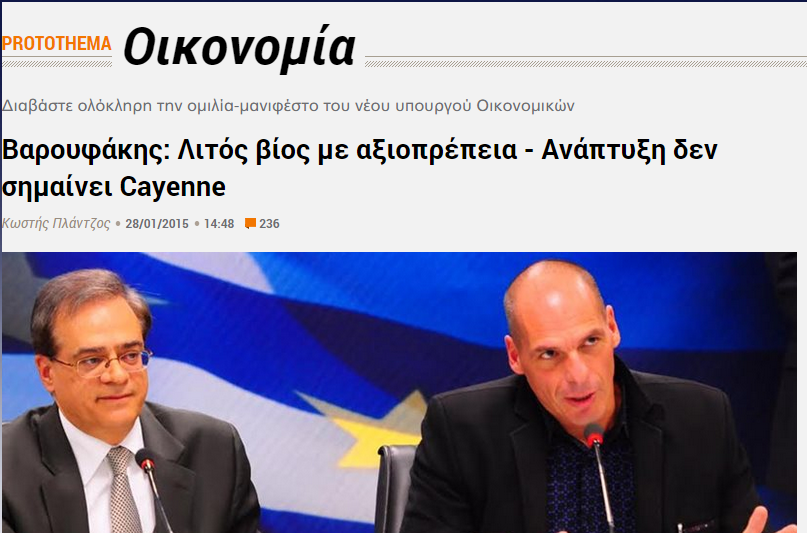 His quote was perfect to be cannibalized of course, by media, blogs, and primarily by the  politicians of the ex-government , almost presenting this reference of simple 'lean' life, as a paradigm of  hard communist-,ex-soviet-type interference of the "state" to the citizens, wondering how unacceptable this could be. Apparently,  forgetting to realize that such interference Has already happened to the lives of all, due to generalised poverty, that is made obligatory through money, while it is served with daily fear and also humiliation, personal and as a Greek.

Walking around almost all the neighborhoods of Athens, at the South, East, West, and also North (considered to be the high-class) section of Attica sub boards, you will see citizens-everyday- looking, by shame, hiding themselves, for food in the garbage of the streets.

Pensions by the Memorandum governments are programed to reach the 300 euros ,and many  are employed uninsured on the time speaking  with 300E. salary, a monthly budget that a middle class family was  used for the last decades to spend  for food supplies of half a month... 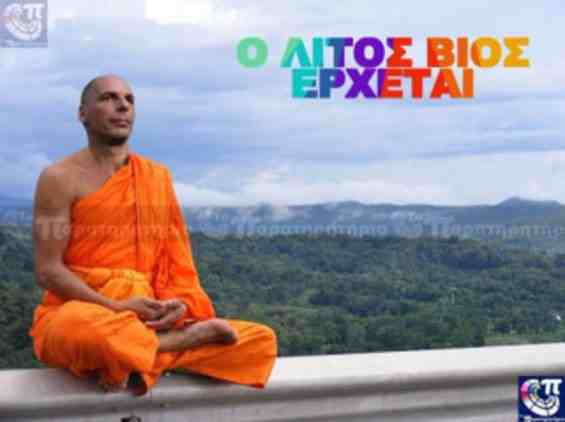 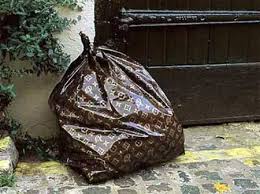 Of course Greeks do know of chic life, not because the money spent on style by the majority of population was stolen or laundered, but because aesthetic was always in the core of Greek civilization .

Greeks did spent more than they earned before austerity, but the credit card of each household, let's say, is probably not the national financial problem that led the national economy to collapse.. The social problem started in Greece mainly during the 2000 year, when ALL the money of the public insurance funds was gone .The governors of that time had played on stockmarket the pensions and the insurance coverage of a whole nation, people who were working, and payed huge money for insurance all life through.

Today Greece is the only EU country not to have implemented a guaranteed minimum income and is among the most sluggish in adopting programmes to address social inequality and aid citizens living in extreme poverty and social exclusion, a report from the Parliamentary Budget Office, found in summer 2014. .

But was it really happy in Greece, before the years of extreme capitalism, extreme luxury and extreme corruption? These are traits, which each of the pre-memorandum governments was truly guide lining the mass to indulge in, through media ( not only goods' advertisement, but also stock market promotion, home loans, etc), so that the banks could keep their profits. It is really very few voters among the Greeks today that have realized that governments and political parties for them are either serving the Bank system , or, promise , at least, to serve the people's profit, as Tsipras gov claims it does.

Have a look of how real life on the islands was, on Crete, half a century ago on 1964 by the unique video of The British Pathé Film Archive. You    will find most elements of the lifestyle menu that actually IS today scientifically proved to be the today's Greek centenarian lifestyle

Actually,  simple living has become a trend. Among real Leaders of our days which teach by their paradigm,as  Pope Francis who shocked his minders by turning his back on a luxury Vatican palace and opting instead to live in a small guest house and who often takes the bus rather than riding in the papal limousine. 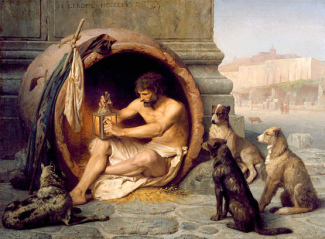 Let's not forget the first in the world who left the luxury to live in a barrel! in his age, and he was a son of a bank-owner of his age The https://moodhackerblog.wordpress.com/2014/09/27/greeks-hanging-on-the-no-minimum-monthly-income-guarantee-among-the-eu-finding-themselves-often-on-survival-budget-lower-than-the-illicit-immigtants-in-greece/" target="_blank">ancient Greek philosopher Diogenes took simple living to the extreme, and lived in an old wine barrel

This is Greek to me !