Blatant irony for the Success Story of Greece. Focus and the hungry Greek crowd 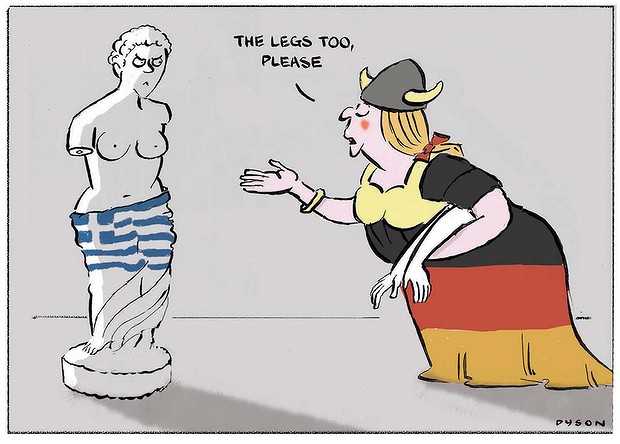 "The so called Greek success story is Grossly Exaggerated " writes this time the German Focus Magazine on one of its main articles on the latest edition, featuring as misleading the worldwide announced recent good news for Greece,  as is the return to the international markets and the restart of the development, that Samaras's government proudly promotes.

" The devastated, exhausted country will depend on many years of external support "  states for Greeece the German magazine Focus, internationally well-known for its blatant publication for Greece, showing Aphrodite of Milos on the Frontpage, wrapped in ragged Greek flag and raising the the middle finger, a cover published during the most difficult moments Greece was facing, risky and fragile for its survival .

Helmout Markwort, the Focus Magazines's founder that had been sued for the publishing by a team of Greek citizens, for defaming the proud Greek Nation and the Greeks, had  stated then, on December 2011, on the Tagesspiegel newspaper, that he had a "clean conscience", as the Orange News ,UK, article had pointed out. "I'm not on the run, and I'm also not afraid that I will have to go to prison," he is reported to have said 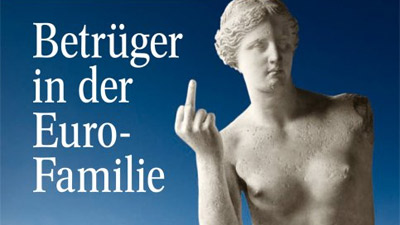 Now,  The Focus Magazine comes on this partticular moment, to mock the so -called succes Greece has reached to return to the markets, a success story, or supposed to be so, first from all praised, among the international community, after Mr. Samaras, by Angela Mercel.

"Images of the third world. Images of a decayed country " , The article strats by describing the really pittiful images of misery, on the  vieggies distribution to the needy, recently, at Kolonos , Athens.

" When the first truck arrives .. you hear suddenly noise. Within minutes the truck is besieged by a large crowd that rushes all over it. Today the  traders of the popular  green markets  of  Kolonos area  want to give  their vegetables for free. And this is news that spread immediately, and so, the traders keep stretching  their hands to give their products to the crowd .... "

Of course, the sense of a devastating "mass" of Greeks, being simply a "crowd"  in the eyes of the rich Europeans, as is the German audience of the Focus, obviously,  is enough. Greeks are now a hungry crowd.

According to the Focus Magazine comment also,  " some Greeks have no money to meet basic living needs, while others are great at finding creative ways to hide their wealth" ... !   "Recently, some posted photos showed wealthy Greeks who were hidding from the state control their money, eg in the refrigerator , or at their home's pharmacy, between the drugs . " 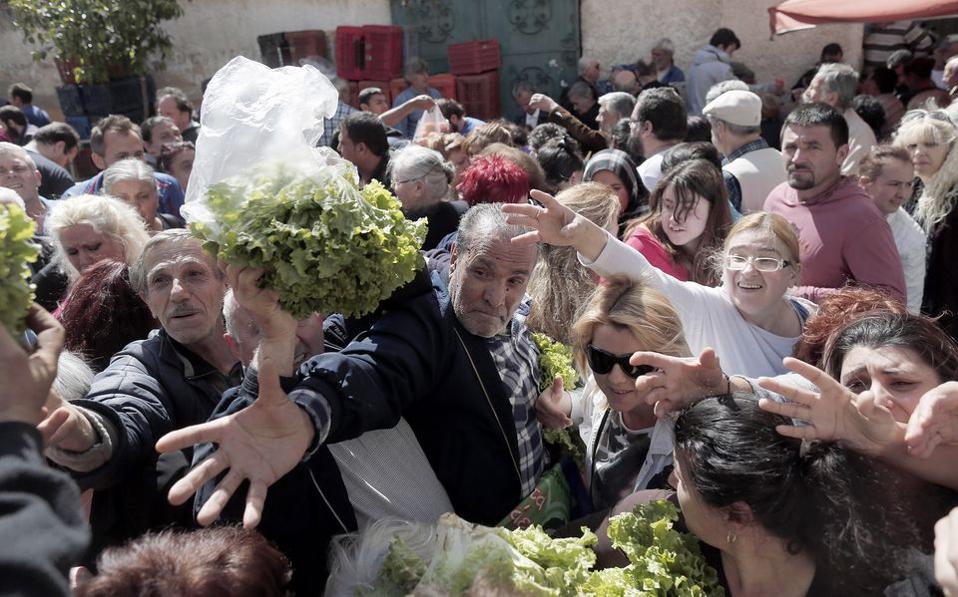 " The good news from Greece is misleading "

states Focus, conitinuing the bombardment of the supposedly good news for Greece.

"  The success story is Grossly exaggerated "

So, what is the truth, for the Focus Magazine?

"Governments in Athens, Brussels and Berlin are never tired of keeping disseminating  that Greece has succeeded. They rejoice themselves with the  success story of the rescue package they, themselves, gave. Of course, this story sounds perfect for the greek governmenet, and comes, suitably perfectly,  just before the elections . It does have,  however, one drawback : It is grossly excessive.

In the fifth year of the European crisis, Greece has never been as deeply mired, as it is today, in such a  confused state . Even now, there is speculation noted with Greek government bonds. Greek people are going from bad to worse. The traders offered the vegetables they produce to the crowd, to gain its support to their syndicalistic struggle ."

( Probably, any meaning of the Greeks' empathy for each other, and the original expression of true solidarity among  hurted by the crisis citizens and social groups, remain  unknown for the writer , and for the Focus readers)

" The economic data is disappointing "

"Greece has lost the ¼ of its production, and unemployment is at 27% . Financial data is disappointing .

The touted primary surplus, just masks the high lending rates .  The bond buyers' trust  -and  this is something economists agree- is not related for them by any means to the Greek economic recovery , but to those who support Greece , the IMF and the European States . "

" Greece is a failed state "

'' The hard part is yet to come '' estimates economist Marcel Fratser by the German Institute for Economic Research ,referring to the certainty of a new bailout and new debt haircut .

"Greece is a " failed state " . A new rescue package is inevitably expected, and this  would be the third.  Earlier or later , you there has to be a dept  haircut.''

Similar to this  accessment , and even worse, is Thomas Mayer's statement to Focus, who is a  former chief economist of Deutsche Bank.

" To stand on its feet again, Greece should be done with the  debt.  In six years, the level of debt  has to decline form 177 % of GDP to 125 % . To do this you need to have a primary surplus of 4.5 % in two years. This is a completely false assumption . Nobody seriously believes that it will happen . "

The Focus reports what the former chief economist at Deutsche Bank had faced during one of his visits to Athens, when he was accompanying prospective investors .

" Greek politicians do not really lose their optimism in such stories" comments Focus with obvious irony .

" Thomas Mayer, while  he had come to Athens with serious investors that were meeting senior Grek polititians,  he heard the Greek politicians proudly to describe their successes. For the bonds,  the new trust , the surplus .etc,etc.

So, a member of the delegation asked : " and what about the debt ? " . The answer of  a senior Greek politician was the following  :

"These are past. We have "Japanised these" (?...). "Our creditors will not press for repayment" , allegedly told the officers . Which made Mr Mayer explain to the investors, adds the Focus article, that  " the Greek government's  debt is by 80 % in the hands of the IMF and the European countries " ,  "So we are relaxed Greek politicians " 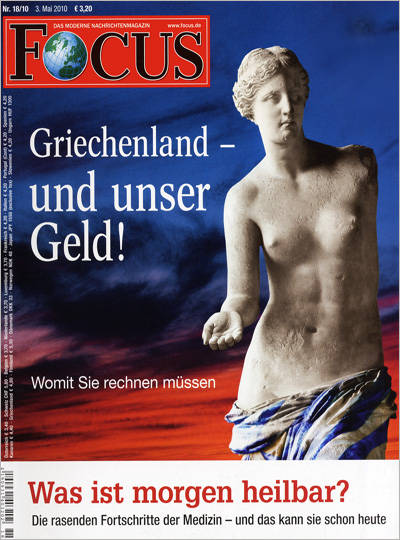 On May 2010 the German magazine Focus had also published a manipulated depiction of the Venus de Milo, once again. The cover title was “Greece and our Money” Venus with a little help from Photoshop has become a “beggar”, which according to the German magazine characterizes Greece and the help the country has asked from the EU and IMF. -