Greece a destination of pleasure and self-knowledge, by the "Trip to Greece" of the BBC 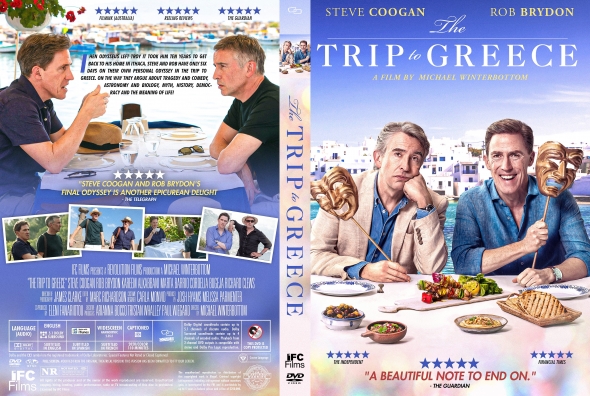 The film is filled with culinary experiences in luxury restaurants, routes to idyllic landscapes, inspiring conversations and biting humor.The production is rich with sentiments, thoughts, unparalleled natural beauty, and philosophical musings and it shows Greece as a destination of pleasure and self-knowledge.

It is a film that advertises Greece during the most critical phase for tourism in our country.

The two British comedians and protagonists, Steve Coogan and Rob Brydon, friends in real life, follow faithfully the rules of storytelling on the screen, directed by Michael Winterbottom.The principal elements of ‘The Trip’ (2010) in the Lake District Park in northern England, ‘The Trip to Italy’ (2014) and ‘The Trip to Spain’ (2017), are also present in ‘The Trip to Greece’.

Certainly, the trip to Greece is somewhat different from the former films.

They are in historic Greece, which shaped Western culture. The two men travel to Epikouros’ homeland, flirt with the Greek myths, disagree, joke, laugh, eat and chat about tragedy and comedy.Their trip to Greece commences in Troy in the pretext of the epic return of Homer’s Odysseus to Ithaca.

When they arrive to Greece, they start from Lesvos, they go on to visit Kavala after an overnight boat trip, where they have breakfast at the five-star hotel Imaret and from there head to the ancient Stageira in Halkidiki, Aristotle’s birthplace.

and take the road to the temple of Apollo at Delphi, Earth’s navel in the shadow of Mount Parnassos, before reaching Athens’ Ancient Agora, where they reenact Socrates ‘death and dine at chef’s Lefteris Lazarou’s “Varoulko Seaside” in Mikrolimano.

A tour of the ancient theater of Epidaurus follows and then the two protagonists board the ferry to Hydra at Ermioni.From there they arrived in Mani, eat lunch at the Mavromichalis Pyrgos in Limeni, go on to visit the Diros cave, an underground “temple” of nature and end up at Pylos’ Venetian castle.

Then, driving to Patras, they board a ferry boat to Sami in Kefalonia, before concluding their long journey, like Odysseus, to Ithaca. On the island’s lush and familiar landscape, they feel the melancholic peacefulness as their journey nears its end and remark that sometimes it takes a trip away from home to realize who one really is.

The series, produced by Sky One, was filmed in 2019, aired on the BBC, and was later released online as an international film on May 22 by IFC Films

find the trailler on our https://www.youtube.com/watch?v=NgwpeZafRfE&list=PLOtU3OD36YBtQio6e5ElViL-wTPf5mBnZ&index=21" target="_blank">Greek to me channel on you tube