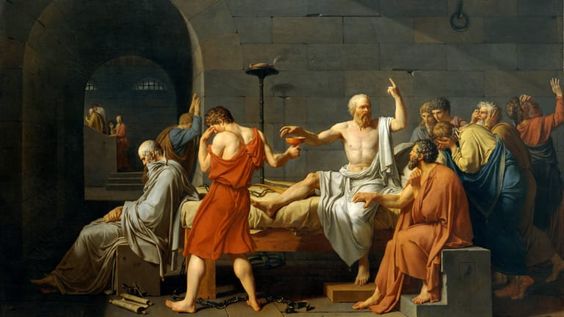 Democracy, medicine, philosophy, science, technology, athleticism, gastronomy, art… all these are constructs that people currently still strongly connect to ancient Greek culture, where many of these concepts and practices were born and developed in highly sophisticated ways.

However, we don’t often relate ancient Greek philosophy with modern psychology; and many of us are not aware that Socrates‘ teachings on Stoicism actually form the basis of Cognitive Behaviour Therapy (CBT), an effective modern tool used widely today to treat psychological issues. It has proven so effective that in the UK, the National Health System offers it for free.

Visiting Athens for the first time from his home in Canada (although he is Scottish by nationality), Donald Robertson, a CBT Therapist and the author of six books, the latest titled ‘How To Think Like A Roman Emperor’, has dedicated the last 15 years of his career combining CBT with Stoicism.

He is the founding member of a non-profit organisation called Modern Stoicism, run by a team of philosophers, classicists, and cognitive psychotherapists. Every year, they offer Stoic Week, a free online course every year that this year had over 8,000 participants from around the world.

The pioneers of this approach, Albert Ellis and Aaron T. Beck, were both originally inspired by Stoic philosophy. Most importantly, both approaches are based on the shared premise that our ‘cognitions’ or thoughts or beliefs are caused mainly (if not entirely) by our underlying beliefs.”“Once we can recognise that feelings involve beliefs then we can start questioning what exactly those beliefs are, evaluating whether they’re true or false, helpful or unhelpful, and confirm or disprove them.

So the cognitive model of emotion opens up a whole new toolbox for therapists – but the Stoics knew this over two thousand years ago,” he says. Nevertheless, he adds,

Robertson’s successful techniques of combining Stoicism and CBT have generated a vast following globally, currently at around 45,000 individuals from all backgrounds reaping rewards from his teachings.

Stoicism has been adopted in the modern age by sportspeople, the military, psychologists and academics as well as ordinary people who find it can offer great improvements in their everyday life.

-The dichotomy of control: choices vs accidents.

The opening sentence of the Stoic Handbook of Epictetus stresses “Some things are up to us and other things are not.” Learn to clearly define your sphere of control: take more responsibility for the things that you do and learn to be more indifferent toward things that merely happen to you

.-Cognitive distancing: what you see is what you get.

Perhaps the most well-known Stoic quote comes a few lines later in the same book: “It’s not things that upset us but our judgments about things.” We should remember that it’s mainly our own value judgments that shape our emotions rather than the external events that befall us

Stoics were known for speaking concisely (Laconically) and describing things in a matter-of-fact way, without emotive rhetoric or strong value judgements – Epictetus says just stick to the facts without adding an exclamation like “Oh no!”

-Premeditation of adversity: protect yourself cooly.

The Stoics were known for picturing setbacks in advance in order to rehearse coping with them, which people sometimes call “negative visualisation” today – although you have to be careful to do this patiently and to view the event with indifference rather than as something genuinely negative

.-The View from Above: see the forest not the tree.

Sometimes also described as a “comprehensive representation”, the Stoics encourage us to view disturbing events within the bigger picture. We’re to picture them from high above like the gods looking down from Mount Olympus, or we can go even further and imagine our current predicament as a tiny speck in relation to the whole of space and time.