Scent of Ancient Greece for Visitors: Walk Around Acropolis and the Athens monuments through the Botanical Greek Flora 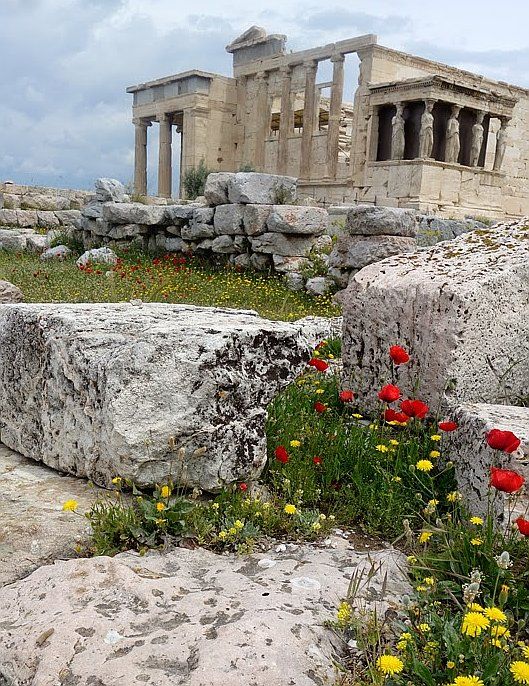 Micromeria Acropolitana was first collected in 1906 from the Acropolis, Athens and considered extinct until its rediscovery in 2006, a hundred years later. Today  It has survived in its original habitat, the natural rock of the hill.

The Micromeria Acropolitana (Lamiaceae)  is a plant with pink flowers  that can only be found on the Acropolisnd is reportedly unable to grow anywhere else. French bnotanologiosts discovered it in 1906. But the next 100 years  following its discovery, nobody saw it again nowhere, nor in the Holy Rock. 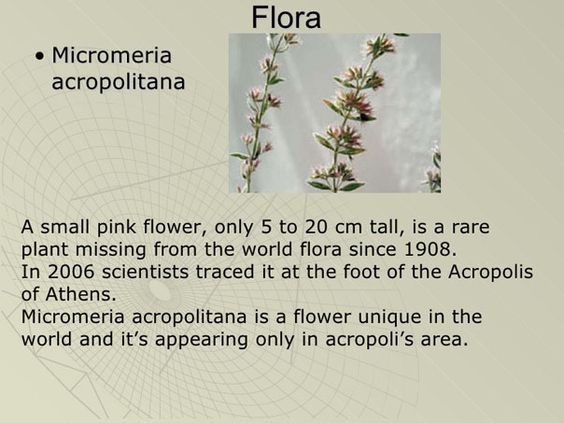 You can imagine the enthousiasm of the researchers when the plant was rediscovered in 2006 on the southern slope by Grigoris and Lambros Tsiounis.The unique plant's  greatest threat within the archaeological site has been proved to be human disturbance, the scientific paper of Proffessor Tsouis wrote on PHYTOLOGIA BALCANICA .

Today , it takes a walk arounhd the Acropolis, the theater of Dionysos, the Asklepieion and the Kerameikos during the spring monhts to notice the exclusively endemic Acropolis plant  along with the poppies, the hornbeam, the skewers and the shrubs, and with a basic knowledge of botanology one could distinguish the carnation, the orchids, and as long the weather gets warm  the "Elatirion", Ecballium elaterium  around the theater of Dionysus. 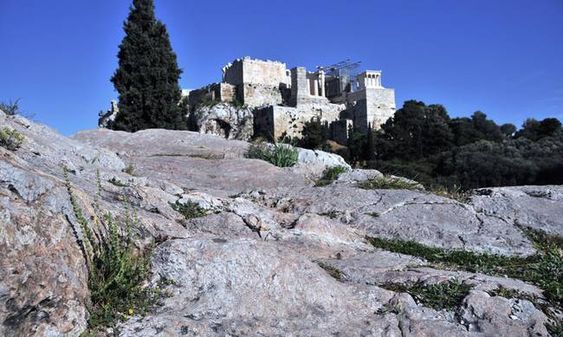 A green walk through  botanical collections will be formed in three spots of the downtwon Athens and the visitor will be navitaded  during his walk through the knowledge of the use of plants during ancient times in different sanctuaries blending the historical knowledge of the archaelogical sites tour with botanical knowledge . The route follows the ancient Panathenaic route, uphill, from the Acropolis North Point to Dipylos , to the Ancient Agora ending upo to archaeological site of Kerameikos. 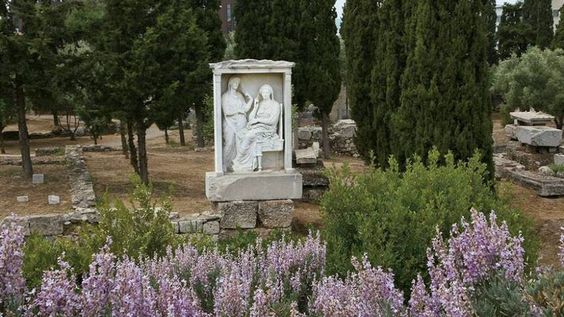 The program is also digitalized offering the visitor an app of the green walk through the archaeological sites  with electronic signage of plants and nearby monuments, The app  is mainly addressed to ujsers of QR Codes and smart phones and aims by its digital labeling no only to the visitor;s navigation but also toi the archaeological sites; employes' surveillance for the harmful vegetation that will appear at the points of the route and will require the intervention of the experts. 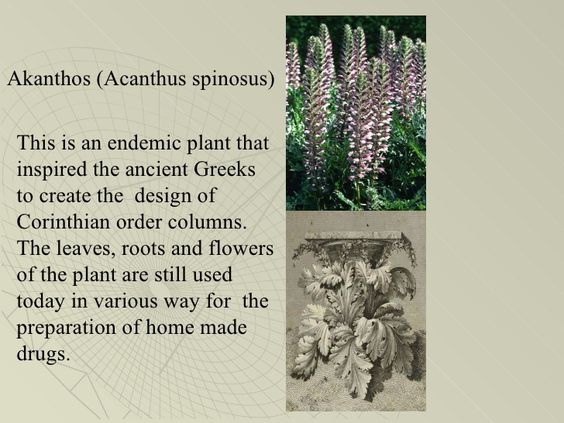 The program will be implemented by the National Hellenic Research Foundation (EFA) of Athens under the direction of Eleni Banou, Head of the Department of Conservation Stelios Daskalakis  and the archaeologists Maria Liaska and Leonida Bournia), in collaboration with systematic botanist Dr. Eirini Vallianatou, and the supervisor. Prof. Theophanis Konstantinidis from the Department of Biology of the University of Athens.
"By studying the monuments for their preservation, we have noticed the damage of some plants at the area, and came to the conclusion that for yerars the cleaning methods of the premises were to blame .We discovered plant species were removed during the cleaning works on the areaqs  so we limited the use of biocides and with the help of collaborators of the Ministry of Environment, we considered ways of coservation  of the natural environment, " Stelios Daskalakis Head of the Department of Maintenance of the Ephorate of Antiquities of Athens stated ,m presenting the new Green Routes of Athenian  Antiquities program which will explain toi the visitors  such details and information and more . 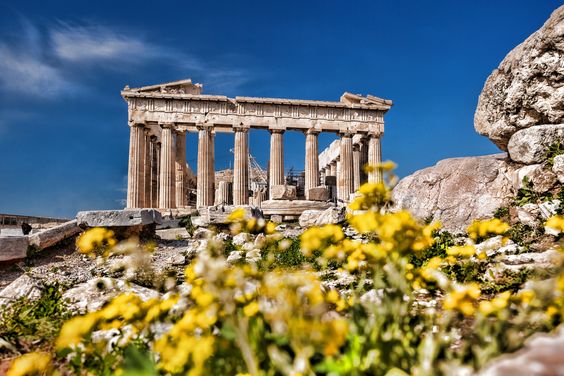 Tansy is a flowering herbaceous plant named Parthenion  in Greek from the word of Acropolis' Parthenon , since history by anceint scripts connets its medicinal use with the  construction of Partehnon and Pericles himself. According to Ancient writer Plinius, a worker fell in Ancient Athe4ns; construction of the Partehnon and Pericles considered the injury a bad sign , of the construction of the Temple of Athena . But the goddess according to the scripts appeared in Plericles dreams and revealed the healing properties oif the plant Tansy blooming during those days, till today on Acropolis feet . Pericles indeed saved the worker's live by placing poultice of Tansy on the wounds.
Officialy by bibliography the plant  first recorded as being cultivated by the ancient Greeks for medicinal purposes.
Both the English name tansy and the Latin generic name Tanacetum are thought to derive from the Greek athanasia, or immortality.
The knowledge of the miraculous properties of the plant goes back long before Pericles  dream, known to Greeks through Greek mythology. According to the legend,m  Ganymede, a beautiful youth carried up to Olympus by an eagle to become cupbearer of the gods, who was made immortal with a drink containing tansy.
The flowers have proved to be immportal indeed, with flowers long-lasting thorugh decades and bno wonder the leaves were used to preserve dead bodies (or at least to disguise the smell),
In the middle Ages  tansy wreaths were  placed on the dead and the plant was often packed into coffins, wrapped in funeral winding sheets.
Henry Dunster, the first president of Harvard University, was buried in 1659 wearing a tansy wreath in a coffin packed with tansy; when “God’s Acre” was moved in 1846 the tansy had maintained its shape and fragrance, helping to identify the president’s remains "The Acropolis area is not only an ancient monument, it is a place to experience nature. Amid new and old buildings, gardens, little forests, river beds, archeological sites and streets a rich diversity of flora and fauna can be found - 500 macroscopic species all in all.

.....At the Tower of the Winds in the heart of Downtown Athens,  located in a fenced archeological site one could see on top of the tower a copper flag in form of a triton shows the direction of the wind. The vegetation in the area is rich: the Common sowthistle (Sonchus oleraceus), Picris spec and Dandelion (Taraxacum spec.), both plants belonging to the Asteraceae, Corn Poppy (Papaver rhoeas), Wild Oat as well as some trees: wild fig, Pomegranate Tree (Punica granatum) and Judas Tree (Cercis siliquastrum) in bright pink spring blossoms. Another tree species, meanwhile, widespread in Greece is the so called Tree of Heaven (Ailanthus altissima) originally introduced from Asia in the 18th century. The lichwort (Parietaria officinalis) is growing right in the middle of wild flowers whereas Cockleburs (Xanthium) causes agricultural problems and is therefore considered a weed by most people.

The road leads on through the pedestrian zone of Dionysiou Aeropagitou street. Pine Trees, Planes, Cypresses, Willows and Mulberry Trees refresh pedestrians and visitors in their welcome shade. The fight between the oak tree and the pine is always uneven, this is true for the whole of Greece and Attica as well. Says the guide, because their resistance is smaller than that of the enemy - be it against deforestation, grazing animals or fires. They also take longer until they are fully developed.

In the Acropolis area there are three types of oak trees: the deciduous Tabor oak, wild oak and the Kermes that are evergreen. A hoopoe with black and white wings and orange brown tuft is visible between the branches. Mr. Gaetlich tells us that around the Acropolis six or seven couples have been counted.

Mallows, nettles and honeysuckle surround a carob tree, whose fruit is used as chocolate substitute for sweets, while the large seeds were applied for centuries as a reliable measure of valuable materials. A little further down a Pittosporum is identified, a fragrant garden bush, that the bees love.

From the busy part of this area into the Koili Odos: This was a major street in the ancient world, where even today cart wheel tracks are still visible. The "GEO trail" reaches the area between the Philopappou Hill and the Nymph Hill. The human impact on nature is less here, so it provides a good opportunity to learn about native and rare plants on the Acropolis. The most important feature is Micromeria acropolitana, a small perennial plant that grows exclusively on the cliffs of the Acropolis and nowhere else in the world. It is a symbol of survival.

Other native species also grow around the Acropolis, such as Cornflowers (Centaurea attica, C. mixta raphanina), Inula verbascifolia methana as well as other rare Greek plants such as Peganum harmala and Biarum tenuifolium. The plants on the cliffs of the Sacred Rock are also significant for Greece, such as Scrophularia heterophyla, Inula verbascifolia methanea, the fern Cheilanthes vellea among others. 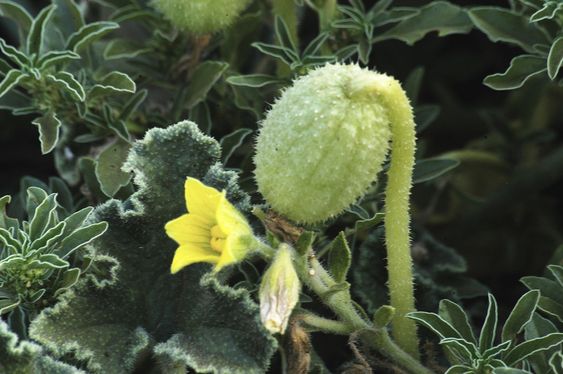 Ecballium elaterium found in Greece around the Acropolis