"Hold your nose" while landing in rubbish, said for #Greece while Mayors warn of #PublicHealthEmergency

It's a Public Health Emergency, the President of Mayors of Greece, George Patouls, said on the radio early Friday morning, asking the government to straightly respond to  the Emergency , while the cities woke up in the hottest day of the summer so far in Greece by the stinky  odors of the a five days' garbage mount all over the streets.
The trash mounts grow all over Athens and in other cities and towns across Greece due to the municipal trash collectors' strike that started on Monday and is announced to continue one week more . The stench is already intense and the heat makes the atmosphere unbearable, especially in highy populated neighborhoods and  the downtown as well.  The heat wave announced by the National Meteo Station is expected to rise the Public Sanity and Health threats, while authorities of the Local Government stress the responsibility of the State  to protect the travelers Health Safety also.
But no official guidelines have been released by the Ministry of Health, or the Greek Center for Disease Control (HCDCP) for the citizens awareness and protection from bacreria multiplying their presence in everyone' s front door , and all around the towns.
Tourist areas in the capital, areas around Acropolis such as Syntagma Square, Monastiraki, Plaka, Mitropoleos Street or the Archaeological Museum of Athens suffer already at most .
Holding your nose in Athens

For days, members of the municipal workers' union have blocked refuse lorries from entering the main depots as the dispute escalates, leaving some street pavements an obstacle course for pedestrians,Kostas Kallergis, wrote at the BBC News,while he witted on his personal account with irony, "Live your Myth in Greece: You arrive in Athens, you take a bus to Syntagma square and you land in rubbish"

...Driving through Athens' central neighbourhoods this morning you cannot miss the piles of rubbish in every corner, BBC article described.

Pedestrians hold their noses as they pass the barricades of waste and at times cross to the opposite pavement. The situation is worse near businesses like restaurants which have big waste loads every day.

Greeks have known bin strikes in the past and try to keep their waste indoors for as long as possible. But a heatwave is on its way and a weekend stroll will be far from idyllic for Athenians and tourists alike.....

"It' s out of mind that Greek workers are protesting their right to collect the garbade" , Giorgos Kakousis said on parapolitika fm in his morning show  . But poltically , the government this time faces the no way out "stincky"  side effects of their memorandum singatures, and the problem is made clear and obvious to  anyone being in Greece during these days .

The City of Athens has issued a statement asking Athenians to not take their trash out as much as they can. “The municipality of Athens asks for the cooperation and understanding of its citizens regarding the problems in waste collection due to the mobilizations announced by all municipalities in the country and their union POE-OTA. The City of Athens urges residents and business owners of the city to contribute to the preservation and protection of public health and the image of Athens.” 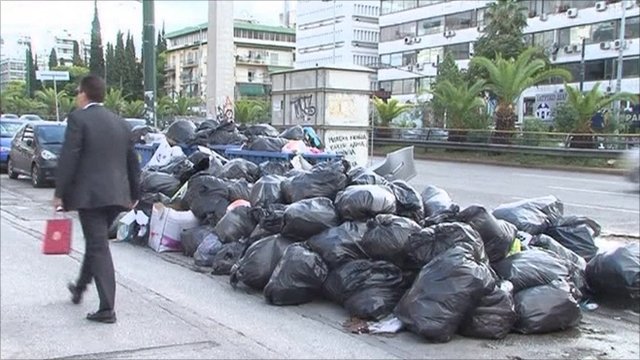 Municipal workers demand the permanent hiring of about 10,000 contract workers whose contracts have expired. Minister of the Interior Panos Skourletis had promised a few months ago that once their contracts expire, they will be renewed.

However the Court of Audit ruled that the renewal of contracts and the permanent hiring of contract employees is unconstitutional.

The municipal workers union POE-OTA met with the minister on Tuesday who promised that he will try to renew their contracts for two months and make 2,500 permanent hirings of cleaning personnel.

POE-OTA refused to accept the proposal and continues the mobilization. On Thursday morning they held a protest rally at Karaiskaki Square in central Athens.

Hollywood star Will Smith, his wife Jada and his daughter Willow that came here to enjoy the crystal clear blue Greek waters, took the intitative to help on the "Cleaning of this paradise"  and talk to the world about that .  On the island of Antipaxos cleaned up three beaches. as posted on instagram. It's a shame to realize Holywd visitors Smiths have cruising the Ionian Sea in Western Greece on a yacht, and , apparently, could not just swim and have fun after they saw the plastic “souvenirs” on the blessed Greek beaches.

Will’s sixteen-year old daughter, Willow, posted about the clean the beaches action on her Instagram account and spread the news to her 2.3 million followers.

She wrote that a group of seven people cleaned up three beaches littered with trash and gathered 22 plastic bags full of plastic and urban debris..

Being so far away from what I perceive as a polluted metropolis, I couldn't stand seeing these beautiful beaches in Greece littered with trash. I saw seagulls, dead on their backs from choking on tiny slivers of plastic and other non-biodegradable materials; They even die from eating fish who have ingested these particle-size slivers. 4 beautiful humans accompanied my mom and I in gathering 22 trash bags full of plastics and urban debris off of 3 small beaches in Antípaxos, Greece. When we see these things on our TV's or phones it seems far away for some reason; But when it's right in front of you I feel as though it is humanities responsibility to do as much as we can (in the moment and long-term) no matter how small the action is. As we all start to do our part, we gradually make a difference. Hopefully today we were able to elongate and preserve the beauty & existence of the local sea life.