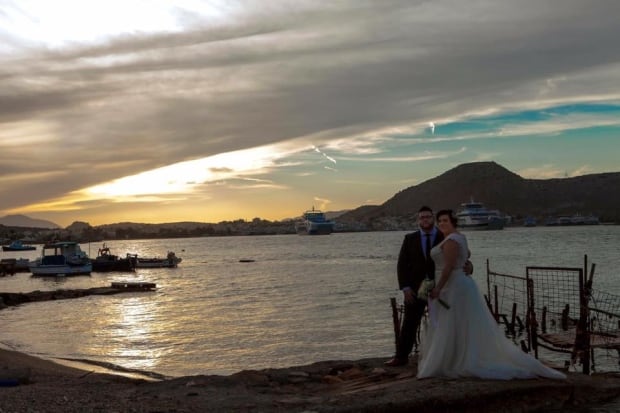 A Greek Canadian couple would have never dreamt of such a worst case scenario of their honeymoon trip to Greece as it finally came out.

The husband fell ill, had two major surgeries in the Hospital of  Santorini, and now battles to survive form a severe lung infection in  the Athens Naval Hospital.

Stephanie Sarlakis, 28, and Nikolaos Sarlakis, 33, left Winnipeg on May 11 for a small wedding reception with Nikolaos's family in Salomina, Greece, a trip they we've been looking forward to and planning for a year as they say . But "Never in a million years would we ever have imagined going through something like this...."

During the first week,  her husband was in great health, Stephanie Sarlakis says .."It just very quickly turned into the opposite of that."

On May 21, they took a ferry from the mainland to the Greek island of Santorini. Nikolaos began to complain of feeling unwell.

"We kind of just chalked it up to the boat was making him sick," said Stephanie. They tried to go to dinner, but her husband had a fever, chills and worsening pain in his abdomen.

"You could tell that he was really weak, he was almost falling asleep at the table," she said

Early the next morning,  some hours after their arrival in SantoriniStephan took her husband to the Santorini General Hospital by a taxi. There were no ambulances running at the time, she has old the media .  After some tests, doctors suspected he had appendicitis

The small hospital had only been open for 10 months, Canadian CBC notes on its report,  with surgeons onsite since March, said Sarlakis. But the severity of his situtaion, did not let him the choice to be tranferred to an Athnes hospital . Accordingto the reports, doctors in Santorini explained to the wife of the patient that if they were to transport him to a bigger hospital in Athens, he might die of infection in transit.

So he underwent an emergency operation

They found Nikolaos's intestine had ruptured as a result of diverticulitis, which causes pouches to form on the walls of the colon.

Surgeons removed the blockage in his intestine that caused the rupture.

On May 27, he was released from hospital with instructions to recover for a few days before returning for a checkup.

They were going to head back to Salomina on May 29, but his condition worsened again.

"He was standing in the bathroom screaming, in agonizing pain, calling for help, and saying he's having a second attack and he needs to get to the hospital," said Stephanie Sarlakis.

They rushed back to the Santorini Hospital and doctors said they had to get straight to the operation room .Because of the severity of his infection, doctors weren't sure he would make it through this surgery, Canadian media said, the wife stated .

Doctors found a second rupture in his intestine, and that gangrene had started to develop as a result of the infection. They removed the gangrenous section and gave him an ostomy bag to allow the resection to heal and for the infection to clear.

"The second time the surgeon, when he came into our room to talk to us, he was apologizing to me, he said they didn't think that this would happen and he was so sorry."

After his second surgery, Nikolaos Sarlakis developed a lung infecttion and was airlifted out of Santorini on June 1 to a hospital in Athens. He was admitted to the Athens Naval Hospital with a high fever as a result of developing fluid as an infection result in the lungs. Now, as he recovers from the two bowel surgeries, he is battling the lung infection . He's stable, but requires high levels of oxygen and care.

No offcial Medical announcement has been released for the Greek Public Hospitals, the Minitry of Health, or the Greek Center of Diasese Control  (HCDCP) , so far.

In a recent interview to the National Herald , the couple seems to make clear that  it was skilled Greek doctors and surgeons who saved Nikolaos  life   , disputing earlier reports that "incorrectly dramatized what happened to him", they said.

"...Doctors coming from his room in Athens said the patient was doing well and would be discharged in less than a week, far quicker than earlier reports indicated as he was recovering after an intestine ruptured from diverticulitis, which causes pouches to form on the walls of the colon", the National Herald wrote .

When asked if there complications from his hospital stay in Santorini, according to the Nationald,  the Athens doctors said there were not. “Thanks to the very good job the doctor did there, Mr. Sarlakis is alive. Here we are just taking care of him.”

The couple had traveller's insurance through Blue Cross, but the benefits don't cover accommodations until after the expected end of their trip.

Since Nikolaos is a dual citizen with Canada and Greece, his medical care bills are expected to be taken care of by the Greek government.

But his wife says that since her husband became ill, they have had about $10,000 in extra expenses. He'll need extensive rehabilitation and physiotherapy once they return to Canada, which she hopes happens at the end of June.

In the future, she wont make the same mistake with insurance again, Nikolaos wife makes clear to the press . One should read the fine print on any health insurance policies. Much of what Stephanie hoped  would be covered — such as accommodations — wasn't. Up to this moment the couples' extra expences include hotel stays, meals, medical expenses and medications, her ferry trips in to Athens to visit him and a non-refundable trip to Crete.