Greece's Olive Oil thrived in US 2017 Awards.."with a sense of Immortality" 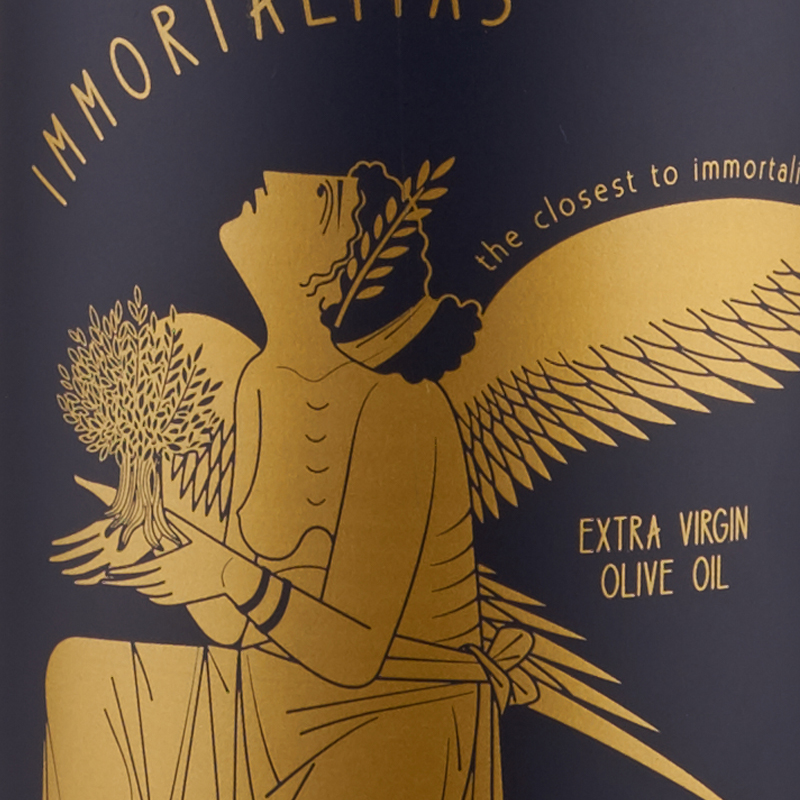 Greek olive oil producers had their best performance to date at the New York International Olive Oil Competition (NYIOOC), this year,  more than tripling last year’s success rate, and taking home more awards than ever before, which included 46 awards in total and 20 of those Gold.  As well, in the Los Angele Extra Virgin Olive   Oil Competion, which just announced its winners awards list, twenty-one Greek extra virgin olive oils won quality or design awards, even in this difficult harvest year.

This was an admirable achievement for Greece who was up against a record-breaking 910 olive oils from 27 countries, reaffirming Greek producers’ dedication to excellence.

The other Greek company with two Gold Awards this year was PJ Kabos from the Ancient Olympia area. 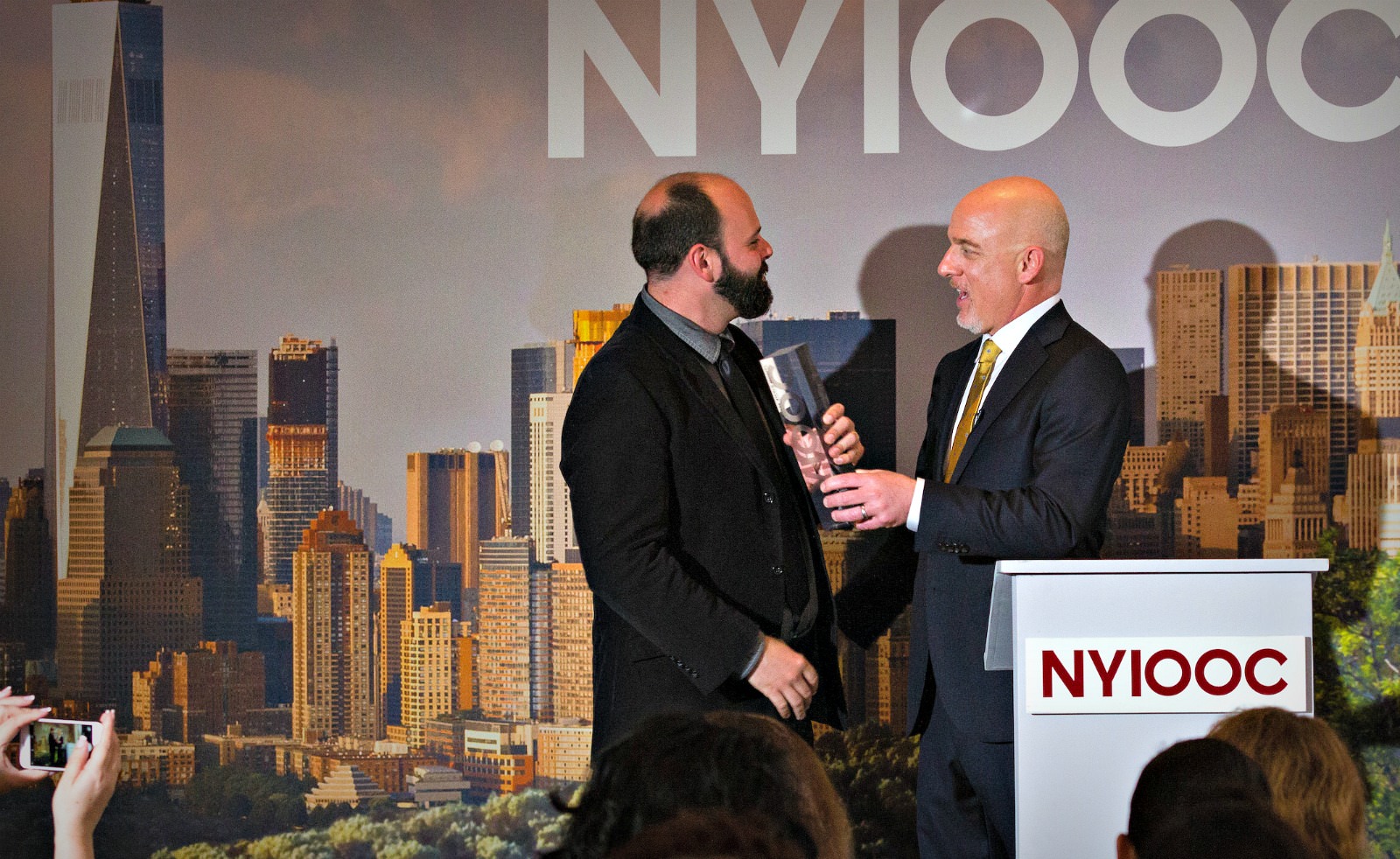 James Panagiotopoulos from PJ Kabos said, “Even though God has blessed us with awards every year since we started participating in competitions, the anticipation and hope of seeing our name in the award ‘credits’ live from New York each year is still there. Actually it is an even more intense feeling than the first year we participated; reaching the top is easy compared to the effort and motivation it takes to stay there!”

Three Greek companies each won a Gold Award accompanied by a Silver Award this year. Great Stories, a new company based in Athens won a Gold for their Medium Koroneiki and a Silver for their medium Manaki. Amphora Olympia and Patrida Imports also won Gold and Silver. Oliorama was the most successful of the Greek winners in Los Angeles this year, with a gold medal for Oliorama Exclusive Olympia IGP (PGI, Protected Geographical Indication), a delicate organic extra virgin olive oil (EVOO), as well as a bronze medal for the conventionally produced Oliorama Exclusive Olympia IGP or PGI, another delicate EVOO.Oliorama’s Maria Spiliakopoulou told Greek Liquid Gold that her company “takes part in as many competitions as we can in different countries” in order to make consumers more aware of their products.

However, “first of all we do our best to have healthy fruit,” following scientists’ advice about the olive groves’ needs and harvesting olives and extracting their oil carefully, since “every single step is equally important.”Overall, Spiliakopoulou emphasizes, “we insist on quality, no matter what. This is the future for Greek extra virgin olive oil. I know it is hard and depends on various factors, but actually this is the only way. Greek extra virgin olive oil deserves it.”

Hellenic Agricultural Enterprises also did very well at this competition, capturing silver medals for Acaia and Aeolian Olive, both medium intensity Kolovi EVOOs from Lesvos. As Yorkis Kyvellos told Greek Liquid Gold, “the rare Kolovi olive native to Lesvos is not well known outside Greece, including by many competition judges. We hope our continued participation in the major competitions will contribute to making it an integral part of the short list of varieties from which the best oils can be extracted.”Crediting hard work by a dedicated team that spares “no effort or attention whenever we have to intervene” in “nature’s ways,” Kyvellos expressed extra satisfaction this year since their new brand, Aeolian Olive, “received a silver award for its maiden outing,” and because the medals confirm that “despite very adverse harvest conditions” this year, “we are capable of maintaining the outstanding quality of our oils.”

Continuous improvement of sustainability and qualityJordan Olivenoel took home a silver medal for their medium intensity organic Bio-Olivenoel, Natives Extra and a bronze medal for the conventional version, Natives Extra. Currently, this olive oil is mainly sold in Germany, homeland of grandparents that immigrated to Greece in the 1980s.Now married to a Greek woman, Bastian Jordan told Greek Liquid Gold he is focused on continuous improvement of sustainability and quality. In fact, he calls himself a Qualitarian (not a vegetarian, who might use products made with unhealthy palm oil), since he focuses on harvesting “at the right moment of the perfect ripening point,” processing the olives quickly, and making “sure that the olive groves are maintained well.”

Panayiotis Skopeteas’ brand-new Immortalitas olive oil, a medium intensity Koroneiki from Messinia, won a gold medal in the Packaging Design competition for Art/Illustration, earning praise for the “use of original illustration as the driving element of the package design.” Skopeteas told Greek Liquid Gold he was aiming for “an ideal combination” of “visual art with the art of oil production” with the help of “the great artist 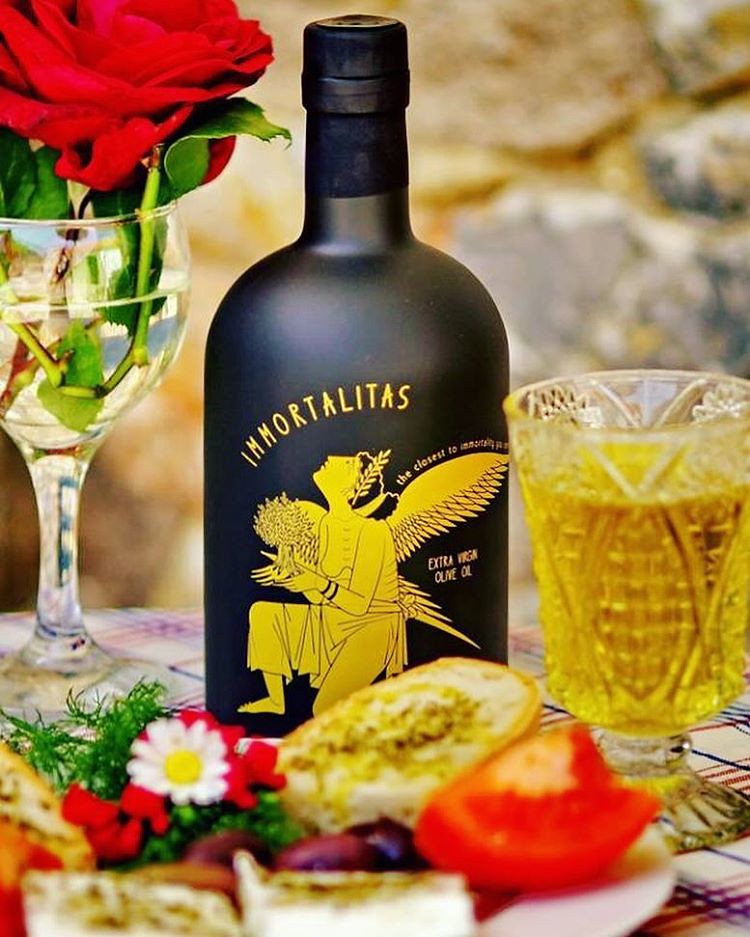 Fikos, an unsurpassed talent.”Fikos—an artist, not a graphic designer–explained that he has always admired “ancient Greek art, especially the red-figure style on vases. My art is also based on the ancient Greek-Byzantine tradition, so I wanted to combine those and give the bottle the sense that it is something that has just been discovered on an archaeological excavation.”Skopeteas added that with the olive oil Immortalitas he “would like to disseminate a special message , … that