Erdogan, who has favored Islamic claims in Turkey, will visit the Hagia Sophia—a building that was originally a Christian church—on the day when the Christian world observes Good Friday.

Turkey’s President Recep Erdogan has announced his intention to pray at the Hagia Sophia on April 14, delighting Muslim activists who argue that the building remains a mosque.

According to Turkish media, Erdogan will perform a Muslim prayer inside Hagia Sofia with all his government, which will be a show of pro-Islamic force against Europe’s “crusaders” and the push to turn the Church into a Mosque.He will be accompanied by representatives of his party AKP (Muslim extraction) and religious leaders in Constantinople media reports from Turkey.

Hagia Sophia, for almost 1,000 years was the largest Greek Orthodox Christian church in the world. Nothing remains of the original Hagia Sophia, which was built in the fourth century by Constantine the Great.

The church was declared a museum by Kemal Ataturk in 1934.  Erdogan wants to remake it into a mosque.

Erdogan, nicknamed the “new sultan” for his political extremism, will seek to channel Muslim faithful in favour of a Yes ( “Evet”

vote. According to the Muslim calendar the month to April (Nisan) is the month of the birth of Mohammed.

The news is carried in pro-government newspapers, presenting the latest book by Turk historian Mustafa Armagan – titled “The Saint Sophia intrigue” (Aya Sofia Entrikalari and are seeking to create and prepare the climate for the prayer, as the will of the Turkish president.

The book argues that the decree signed by Kemal Ataturk in 1934 which turned Hagia Sophia from mosque into a museum, is not authentic. According to Armagan, the Kemal Ataturk signature on the decree is false and the act has no legal value and therefore Hagia Sofia can in fact be used as a mosque, as was the case after the Turkish conquest of Constantinople in 1453. 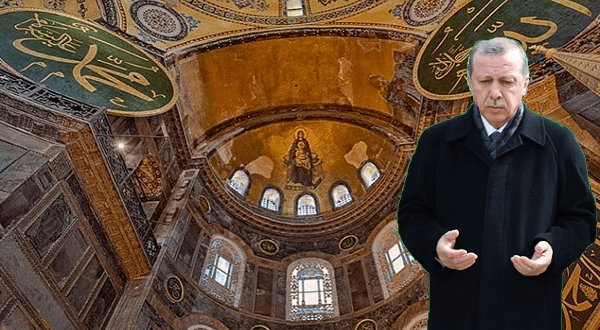