A stunned nation watched funerals for victims of the bombings on national TV and citizens raised questions and fears about what some consider lax security at churches.

"The state of emergency means absolutely nothing to me," said Andrew Abdel Shaheed, an Egyptian Copt in Brussels.

"It means that people will get trailed for no reason and arrested with no warrants, but what does it do for the future of Egyptians? I personally do not feel safe to return to Egypt."

The Sunday strikes, which targeted Egypt's persecuted and vulnerable Christian minority on the first day of the faith's Holy Week leading up to Easter, left at least 45 dead, Egypt's health ministry said Monday.  At least 125 people were injured in the attacks.

The Cabinet will allocate 100,000 Egyptian pounds ($5,530) compensation to families of each victim in Tanta and Alexandria's church bombings, state TV said.

ISIS, which claimed responsibility, warned of more attacks in a statement. "The Crusaders and their apostate followers must be aware that the bill between us and them is very large, and they will be paying it like a river of blood from their sons, if God is willing," the group said in Arabic.

After the bombings, Egyptian President Abdel Fattah el-Sisi declared a period of mourning. The government formed a council to counter terror and extremism.

"The attack will not undermine the resolve and true will of the Egyptian people to counter the forces of evil," the President said in a statement.

The Egyptian Cabinet, on its website Monday, said it had approved a three-month, nationwide state of emergency that went into effect at 1 p.m. Cairo time (7 a.m. ET).

"The state of emergency allows both the armed forces and the police to execute those procedures necessary to combat the threats of terrorism and its financing, maintain security around the country and protect public and private property, as well as preserving the lives of citizens," the statement said.

The country's parliament must now approve the move within seven days for the three-month initiative to remain in effect. The vote had been set for Monday but has been postponed until Tuesday. The parliament, expected to approve the decision, wants Prime Minister Sherif Ismail to explain the reasons for the move.

In a statement issued on the Telegram messaging platform and circulated by several ISIS supporters, the militant group identified the bombers as Egyptian nationals. Egyptian authorities have not confirmed the bombers' nationalities. 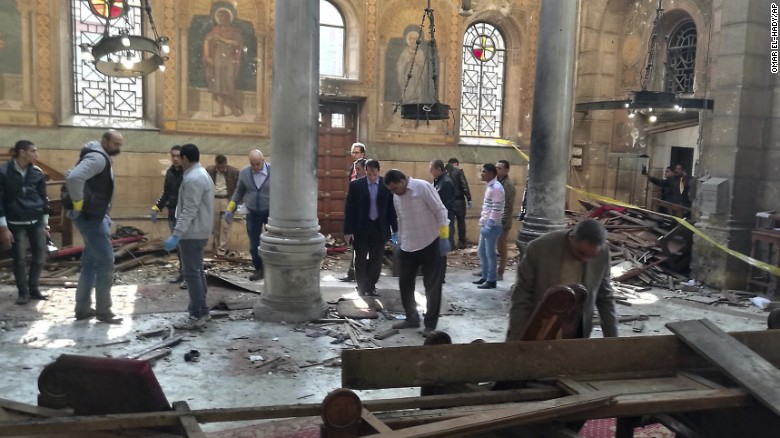 The attacks unfold on the Palm Day

At least 47 people and more than 100 others were injured in the attacks on the churches in Alexandria and Tanta claimed by ISIS.

The attack in the Nile Delta town of Tanta is the latest in a series of assaults on Egypt’s Christian minority, which makes up around 10 per cent of the population and has been repeatedly targeted by Islamic extremists.

It comes just one week before Coptic Easter and the same month Pope Francis is scheduled to visit Egypt.

The blast struck the Mar Girgis Coptic Church in the Nile Delta City of Tanta as the Coptic Christian community marked Palm Sunday, one of the holiest days of the Christian calendar. It marks the triumphant entrance of Jesus to the city of Jerusalem.

The first attack took place in the Saint George church in the Nile Delta town of Tanta, north of Cairo, killing 27 and wounding more than 70.

Later, an explosion hit Saint Mark’s Cathedral in the coastal city of Alexandria, the historic seat of Christendom in Egypt, killing at least 18 and wounding 35 just after Pope Tawadros II finished services.

CBC TV showed footage from inside the church, where a large number of people gathered around what appeared to be lifeless, bloody bodies covered with papers.

Health Ministry spokesman Khaled Megahed confirmed the toll from the attack in interviews with local and state-run media.

Egyptian television channels have broadcasted CCTV footage they say is of a suicide bomber responsible for one of Sunday's church bombings.

The two clips show a man wearing a blue sweater draped over his shoulders approaching the main gate to St. Mark's cathedral in Alexandria, before being turned away and directed toward a nearby metal detector.

The man then passes a female police officer chatting to another woman and enters the metal detector before an explosion engulfs the area.

ISIS later claimed the attacks via its Aamaq news agency, after having recently warned it would step up attacks on Egypt’s Christians.

In the Vatican, Pope Francis has decried a deadly attack on a Coptic church in Egypt during Palm Sunday celebrations, just weeks before his planned visit to Cairo. The Pope was marking Palm Sunday in St. Peter's Square.