Playing Life and Death in #Knossos, the first draughtboard in the world #AncientGreece

Knossos game is the ancient board game discovered by Evans in the Palace of Knossos and goes back to 1600 BC. It is a "race game", but at the same time something more.

It portrays an ancient symbolism about life and the trip to Hades with a return back to life. A gap between the two parts of the board was supposed to be the River-Ocean that separates the world of the living from the world of the dead, to be found far beyond the sea, where the Sun descends.

The famous gaming board from the Palace of Knossos, constructed from ivory, rock crystal, blue glass paste, and gold and silver leaf. gives today an idea of the  luxury royal compositions in the New Palace Period.

Remarkable miniature work was done not only in faience, but also in rock crystal, ivory and other precious materials.

Knossos draughtnboard which is found today in the Heraclion Museum   is accompanied by four ivory gaming pieces, with which, perhaps, the players tried to capture the four "towers"on a wooden base. The four ivory draughts corresponded to the circles with the white lozenges. ..

This was undoubtedly a royal game indicating the lifestyle in Minoan palaces and the high quality output of Minoan miniature art workshops. The only similar finds come from the contemporary Egyptian Court. The corridor of the Draught Board

The Royal Gaming Board was found here, a kind of board game made of ivory, rock crystal, Egyptian blue, silver and gold, now in Heraklion Museum.

To the right of the corridor are the "Royal Pottery Stores", where Kamares pottery of the Old Palace period (1900-1700 B.C.) was uncovered, and to the left, storage and workshop areas. 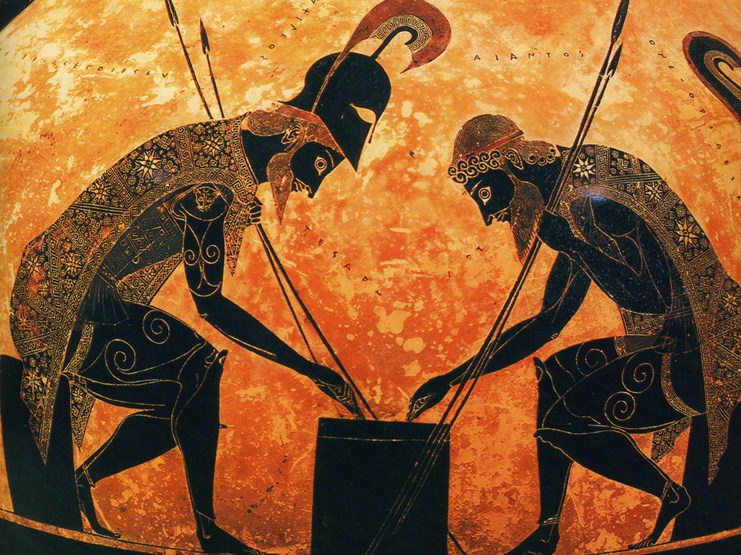 Amphora of the 5th century BC depicting Achilles and Ajax playing a board game.