A Taste of #Lesvos in #Sydney by the Greeks Abroad 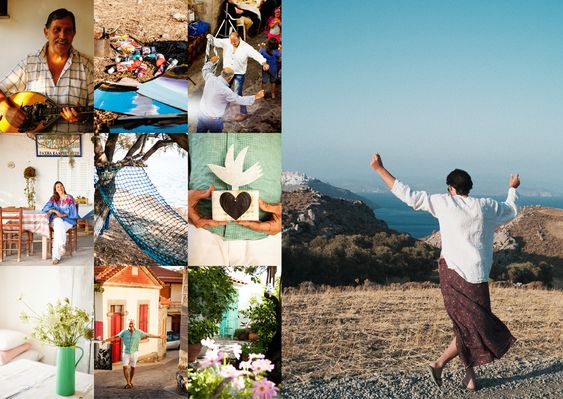 Sydney is home to the biggest diaspora of Lesvos-heritage people outside Greece.

Lesvos is famous for philosophers, artists, ouzo, sardines, the best olive oil in Greece, the petrified forest, centuries-old kindness to refugees, the spiritual home of women in Eressos and the first meeting of the head of the Greek and Roman Catholic churches in hundreds of years (2016).

The third largest Greek island, Lesvos  has a history that dates back thousands of years. It produces its famous ouzo and the best olive oil in Greece, and enchants visitors with the ancient antiquites and its other natural beauties. Lesvos has been home to the painter Theophilos, the philosopher Aristotle, the poet Elytis and many other famous Greeks.

"...Sometimes at the end of the day I walk the dogs to the water where small Greek fishing boats sits on a very still Aegean Sea. The colours at this time of day are breathtaking. I LOVE Greece and My Greek Island Home. One of the joys of living in a Greek village is conversing with the locals. My Greek is not great but I love having time to be able to stop and chat. There are certainly plenty of opportunities for chatting, especially when spring arrives and the locals open up their shutters and come out from behind closed doors. (Right) This is a picture I took of one of our neighbours; she looks so small sitting in the shadows. The colour of her dress and apron sit perfectly with the metal gate...."

Claire Lloyd in her book My Greek Ilsland Home

A group of friends in NSW with a keen interest in Lesvos have been working diligently to present A Taste of Lesvos on Sunday 2 April as part of the Greek Festival, and under the umbrella of the Mytilenean Brotherhood of Sydney and NSW.

Lesvos gained international attention for influxes of refugees in 2015 and 2016. The island previously embraced hundreds of thousands of refugees in 1922 as a million Greeks were evacuated from Ottoman Turkey. Since 2013, Lesvos has again helped innocent victims of war. This island, like the rest of Greece, is going through economic hardship. Yet, as they did in 1922, the residents welcome everyone and show the compassion and kindness for which they are known.

For some reason, the international media has portrayed the island as unsafe. There are no issues: no local has experienced any problems, no tourist has been inconvenienced. The visits of Angelina Jolie, Susan Sarandon, the Pope, and the Greek Orthodox Patriarch have highlighted this. The friends, or rather the parea, know that, and they want to present this to the broader community.

A Taste of Lesvos Festival is  held at Mytilene House in Canterbury, today, April 2, 2017 in  the south western Sydney suburb that is home to more Lesvos-heritage people than any other area in the world outside Greece.

The event will showcase the vast history, culture, and commerce of the island. The day starts with a musical performance from some of the many talented musicians of Lesvian heritage including Spiro Bougoukas, Eleni Meli and Mersina Tonys-Soulos. They will be joined by one of the world's best bouzouki players - Tassos Bouzouki. A late addition is the star of the island, John Tikis, who is currently on tour in Australia with his new album.

Mytilenian Brotherhood of Sydney & NSW on the celebration of the 104th Anniversary of the liberation of the Island Lesvos., November 8th, 2016

Added to the mix will be a lecture on why you should travel to Lesvos, and a talk about the great painter Theophilos. Theophilos had a style and a story that captivated the entire island last century. This lecture is presented by artists and the comedian Anna Cominos, who is starring in her own shows in May.

Mr Costa Vertzayias, President of the Hellenic Studies Foundation at the University of New South Wales will present on Asia Minor (Turkey) and its connection with Lesvos.

To add to the taste is a demonstration on how to make local food! This will be followed by a tavli championship – the famous Greek backgammon game that is fun and easy to play. The tavli is being sponsored by Blue Sky Hotel Lesvos (Petra) and Plateia Gyradiko in Potts Point.

Those in attendance will be treated to a range of products and services made famous by the island.

Above: Sydney, 1946. Panagiotis Angelis and Efstratios Mihailaros, of Agia Paraskevi, arrive in Sydney and are welcomed by "horiani". L-R: Konstantinos Tsakiris, Panagiotis Angelis, Andonios Prodromos, Pericles Koulmandas, Christoforos Hatzimoutafis and Efstratios Mihailaros. Konstantinos, who was a partner in the Blue and White Cafe, had come from Goulburn, whereas Pericles, who owned the White Rose Cafe, had come from Ariah Park. Once the Second World War was over and communication between Greece and Australia was re-established, migation re-commenced. Panagiotis and Efstratios represent the first wave of post-War migrants.

The event is being made possible thanks to the dedicated committee, including Dimi Konstantinou, Christine Gazepis Stavropoulos, Mano Francis, Maria Findanis, Myrsini and Spiro Bougoukas, Pamela Rogaris, and Will Vee, along with Vicky and Anna.

A Taste of Lesvos is part of the 35th Greek Festival of NSW and is one of the most anticipated of the 30 initiatives that have been arranged for the Festival.

The Impressive Lesvos for  Mindfulness concept:  HowClaire Lloyd  made it  home here...

Using breathtaking photography and a smattering of carefully chosen words, Photographer Claire Lloyd’s pictures her long-standing affair with the island of Lesvos - also known as Mytilene- in her book " My Greek Ilsand Home " by her   "pure blue happiness" photos that capture the breeze of Aegen  and the earths ' painting on this  paradise isle.

Claire Loyd   tells the story of how she regained her sense of balance in an  isolated village of Lesvos, just somewhere in the Aegean. '

Lloyd has somehow managed to distill all the memorable parts of our sun-drenched childhoods, everything we forgot to treasure while growing up, serving it up in a weighty tome that feels like home!

Hailing from faraway Australia, but having made a life for herself in rainy old London, Claire Lloyd was a busy artist, designer and photographer, in danger of becoming a victim of her own success. Seemingly thriving on her volatile urban existence, it took a chance encounter with a place that time forgot, to make her realize that she needed to stand still.

From a random conversation all the way through to her final destination, 'My Greek Island Home' retraces the steps that changed her life in a book that openly expresses a sense of gratitude 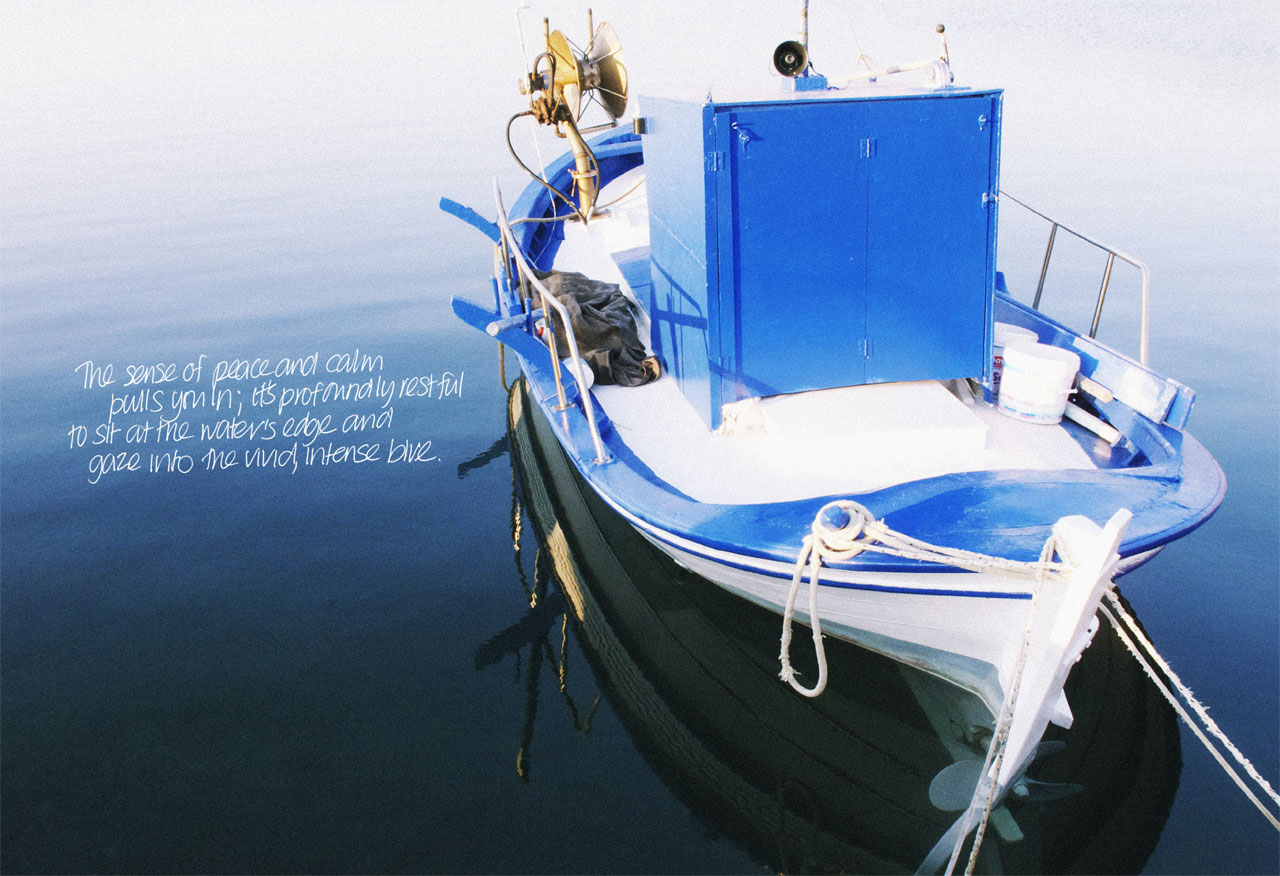