#Athens, the playground for vandals, and a gov tolerant to #terrorists, @kmitsotakis to #GreekPM in Parliament

By a fully updated report on the worrying rise of violence and crime in Greece , Greece's Opposition party leader Kyriakos Mitsotakis, blamed Greek PM Alexis Tsipras in Parliament for his government "showing tolerance to crime and sympathizing the terrorists, while letting the streets with reduced presence of police, allowing criminals to merge with new terrorist groups, who reportedly maintain cells in downtown Athens, and leaving the citizens unprotected due to the leftist government's "obsessions on security" , speaking during a Parliamentary Query session on Friday February 17th.

Kyriakos Mitsotakis personal accused Alexis Tsipras for some ministers of his cabinet, and specific initatives and stances of his government that "let pleased" the terrorists,  naming some of them

.. This bothers you, but Why; Because he said that in a private conversation? Or because it was recorded recorded and leaked? And indeed, the Minister supports this option."

...The only people who were pleased by this decision were hard-offenders and terrorists." 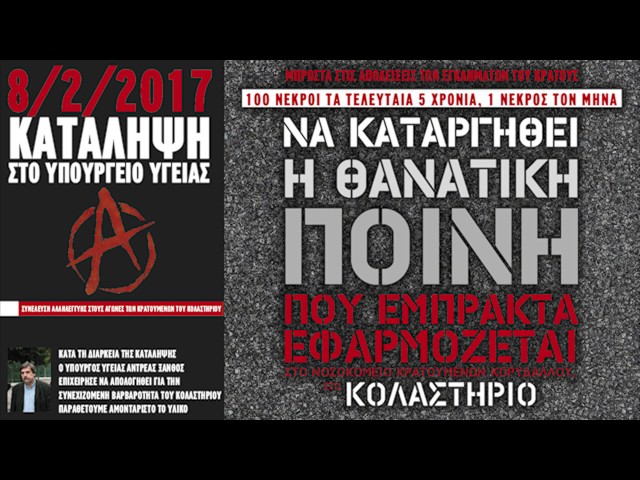 "The data Mr. Tsipras is inexorable", Mitsotakis went on , listing incidents of the country's  criminal reality of the recent period :

I submit relevant information and relevant tables, which show the decrease of crime in the four years ( prior to your reignance) and the rise in crime during the two years of your gorvernance.

These are the official figures of Greek Police.

"Υou put the crime into the daily routine. And you have filled the news with images of daily vandalism...

The ticket Machinery ( in the metro areas) are continously destroyed. You want numbers? "The playground for vandals, with the backdrop of a state apparatus which is hazardously inactive.

Lawlessness is and being generalized and crime is spread. And the worst of all is that lawlessness starts to obtain the characteristics of regularity.  The next trolley burnt  does not even cause to most citizens any kind of impression."

In Exarchia, a historic district in downtown Athens the situation is running out of control, Mitsotakis reminded.

"Which means that the residents of Exarchia now live in a peculiar "ghetto" in the center of Athens. All this is done with the tolerance, with the complicity of the Government.

- You know - that the criminals and the new generation of terrorists ( in Greece)  merge .Police has informed you on that and you know it ."

As you very well know from police, there are ( terrorist) cells in Exarchia ."

"But, you not only do nothing fro that, the worst is , you do not even allow the police to do what it should

The reality is the reductions  on the presence of Greek Police in the streets, just serve your (leftist) obsessions...

...On the one hand we have your  monumental incompetence. And on the other hand - and this ratio is even more worrying - we have your ideological obsessions in matters of security." Terrorist organization November 17th "Not to  be shelved " for the USA

On the same day, Friday Feb 17th , an exclusive interview was published on kathimerini newspaper, of the ex-CIA analyst on Greece's most tough terrorist organization, November 17,  John Kiriakou , who stressed that "the November 17 case  should not be considered closed and it is not about to be shelved."

“There are still some members of the organization we don’t know about. Not everyone has been arrested,” said the expert analyst Kiriakou said.

“For example, we still don’t know who assassinated [deputy chief of the Joint US Military Aid Group to Greece George] Tsantes and his driver [in 1983]; we don’t know the identity of the woman involved in the assassination of [CIA Station Chief Richard] Welch [in 1975]. That they may have regretted their part or left the organization for some reason, obviously doesn’t mean that they should be pardoned for their sins. They have to pay,” Kiriakou insisted.

Categories: Greece , Politics, Your Safety in Greece , Greece and the USA