The Ancient Rebirthing Pomegranate, So Greek to me ! The pomegranate fruit has been used throughout history and in virtually every religion as a symbol of humanity’s central beliefs and ideals, namely, life and death, rebirth and eternal life, fertility and marriage, and abundance. In Ancient Greek mythology, the pomegranate features prominently in the story of Persephone and her marriage to Hades, the god of the Underworld.

Hades kidnapped Persephone and took her to the Underworld to be his wife. Persephone’s mother, Demeter, goddess of fertility, considering her daughter lost, went into mourning and thus all things on earth ceased to grow.

Zeus, Persephone’s father, commanded his brother Hades to release her, however Hades had tricked her into eating six pomegranate seeds, and it was the rule of the Fates that anyone who consumed food or drink in the Underworld was doomed to spend eternity there.

The earth began to germinate and continue to bear fruit , as Persephone would stay with Demeter.

The remaining months that she will descend to the underworld to join Hades they would  create together  the forces that were preparing the soil to bloom .

The pomegranate offered to Persephone by  Hades, with thousands of seeds inside, is thus symbolizing the fertilization of the fields, the union of the seed with soil,  as the union of Persephone with the god of the Underworld. 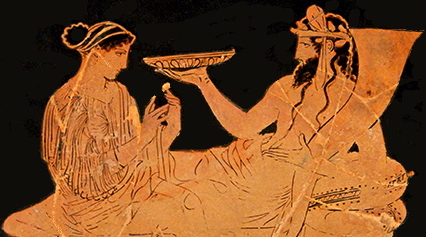 Zeus sent Hermes to the underworld, to convince Hades with soft words to allow Persephone come up from the misty gloom of the underworld, so that her mother Demeter might see her with her own eyes.

Hermes straightaway flew down to the underworld. He found Hades in his house, seated upon a couch, and his shy wife Persephone with him.

“Dark-haired Hades,” said Hermes, “you who are the ruler over the departed, Zeus bids me bring noble Persephone forth from the underworld up to the rest of the gods, so her mother may see her, and cease from her anger.

“Demeter has promised to destroy the tribes or mortal humans by letting no plants grow,” Hermes said. “But this will put an end both to humankind, and to the sacrifices and honors humans offer to us, the immortal gods.”

Hades smiled grimly and turned to obey the command of Zeus the king. “Go now, Persephone, to your dark-robed mother,” he said. “But feel kindly towards me. I could be a fitting husband for you among, I who am a brother to Zeus, the ruler of all the gods and goddesses.”

Persephone was filled with joy. She sprang up in gladness. But while she had been distracted, Hades had given her a sweet pomegranate seed to eat. For if she ate even one thing in the underworld, she would have to return there...

This is how the ancient Greeks explained the cycle of the seasons: when Persephone was with her mother, the earth flourished and the crops grew (Spring and Summer); when she returned to Hades, Demeter mourned and the earth was infertile (Autumn and Winter).

As a consequence, pomegranates were often offered to the goddess Demeter in prayer for fertile land.

The pomegranate was also associated with the Aegean Triple Goddess, who evolved into the Greek goddess Hera; in Polykleitos’ cult image of Hera in the Argive Heraion, she is portrayed with a sceptre in one hand and offering a pomegranate in the other as an emblem of fertile blood and marriage, and a substitute for the narcotic capsule of the opium poppy.

In some Greek dialects, the pomegranate was called rhoa, thought to be connected with the name of the earth goddess Rhea, mother of Hera. 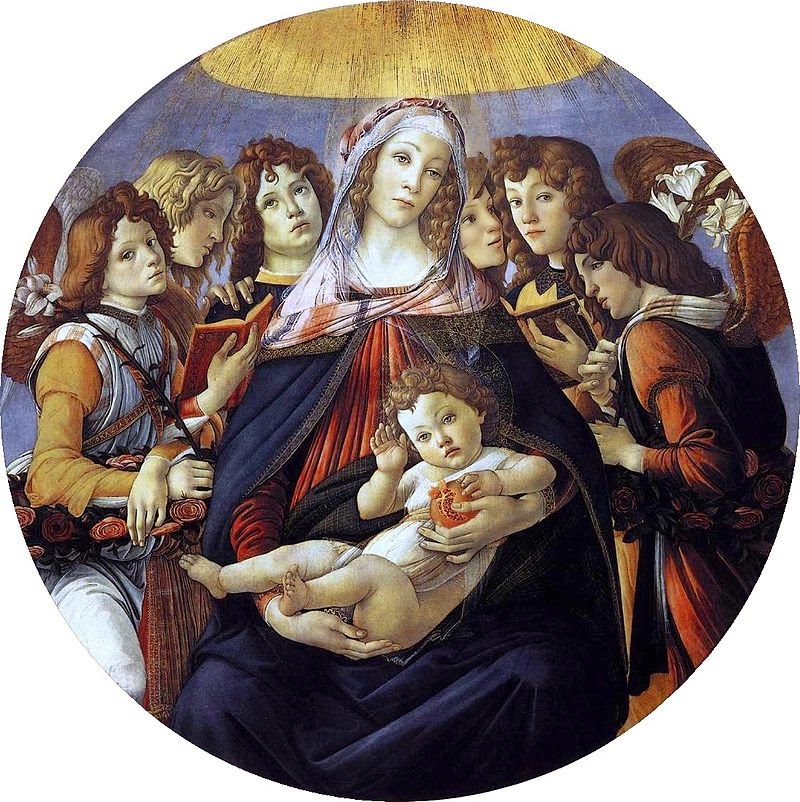 Boticelli's "Madonna of the pomegranate"

In Christianity, too, the pomegranate appears incorporated into religious decoration, for example, woven into vestments or liturgical hangings. It is also a common emblem used in religious paintings, including those by Botticelli and da Vinci, where it is usually seen in the hands of the Virgin Mary or the infant Jesus.

Koliva, the boiled wheat with pomegranate seeds-  from Ancient times to Christian memorials

The seeds of pomegranate, fresh, are considere essential at the preparation of koliva, boiled wheat which is blessed during the memorial Divine Liturgy performed at various intervals after a death; at funerals and during the mnemosyna, i.e. the Orthodox Memorial services

In the Eastern Churches, koliva. may also be used on the first Friday of the Great Lent,[1] at Slavas, or at mnemosyna in the Christmas meal.

One must sacrifice to the gods for three purposes: to give honor, to show gratitude, or because of one's need of good things. (Theophrastus, On Piety, frag.

This complex of ideas ‘ man asks, gods give, man gets and shows gratitude, gods are pleased’ is expressed in ancient greek with the term charis (χάρις;). Charis means favor, a favor which is expected to be repaid.

The idea of charis plays a particularly important role in Orhodox Christianity as well. That’s why the ‘oral’ statement becomes more prominent when there is an exchange between God or Saint and the offerer.

The ritual food of today's traditional koliva , with boiled wheat , which was extensively used in Ancient Greek sacrificies, and offered with pomegranate seeds at the celebration of Greece's rebirth , show the ritual connection of the ancient Greek beliefs of underworld and today's Orthodox Greek ones of the afterlife

The ritual food most likely was used even before Christianity since the ingredients used have symbolic value relating to the Greek pantheon.

In the Ancient Greek panspermia, a mixture of cooked seeds and nuts were offered during the pagan festival of the Anthesteria

. It was held each year from the 11th to the 13th of the month of Anthesterion, around the time of the January or February full moon, and was straightly linked with the presence of Persephone on earth, that would allow the earth to harvest. Celebrate Your Good Luck in New Year by smashing the Pomegranate

Today, the pomegranate still has strong symbolic significance for the Greeks. At important festivals in the Greek Orthodox calendar, including Christmas Day, it is customary to adorn the table with pomegranates (known as ‘polysporia’ meaning ‘many-seeded’

and on New Year’s Day it is traditional to break a pomegranate on the ground.

On moving into a new home, house guests traditionally bring pomegranates as a symbol of abundance, fertility and good luck for the new owner. In Islam, the Qur’an mentions that pomegranates grow in the gardens of Paradise, and in Hinduism and in Persian and Chinese culture, the pomegranate is also considered a symbol of fertility and procreation, associated with earth goddesses.

In Judaism, pomegranates were the fruits that were brought to Moses to demonstrate the fertility of the promised land, and are traditional consumed at the festival of Rosh Hashana (New Year)

Don't miss our Special Page by greek2m.org , The Pomegranate

Categories: Travel to Greece News , Greece Cultural Heritage, Greek to You in Greece