Yahya from Crete, the American leader of Islamic State On December 8, 2015, Yahya’s voice came through clearly on Al Bayan radio—the voice of the Islamic State. He is now the Islamic State’s leading producer of high-end English-language propaganda as a prolific writer for its flagship magazines, Dabiq and Rumiyah.

Yahya’s picture on Facebook showed a bearded, bespectacled young man with a Kalashnikov over his shoulder. He was dressed for cold weather, as if in preparation for a night raid or patrol. When I saw him, writes Graeme Wood in his book  The Way of the Strangers: Encounters With the Islamic State. " I wondered, Wood adds,  when I last saw someone looking so content...."

"As for the biography itself, nearly every word showed signs of careful selection, including his name, Bahrumi, a portmanteau of the Arabic words bahr (“sea” and rumi (“Roman”.

Many jihadists construct a nom de guerre from their first name and their national origin. He called himself Yahya of the Roman Sea, or Yahya the Mediterranean. The biography continued

He traveled seeking knowledge and work in the path of Allah until Allah granted him hijrah to Sham. He now resides in the countryside of Aleppo.

Now I thought I had enough data to narrow down his identity: a philologically inclined Cretan jihadist convert not just to Islam but to Dhahirism, a minuscule legal school. The list of candidates could not be long".

Many converts choose Arabic names that are the equivalent of their birth names. Yahya is Arabic for John, in English, or Ioannis in Greek.

In a German-language jihadist chat room, I found a reference to “Ioannis Georgilakis,” and here the trail began to sizzle under my feet. Georgilakis’s Facebook page showed photos of the same hirsute young man with glasses, dressed in Muslim garments and playing with his kids.

"As I looked at his Facebook page, I began to wonder whether the Greek was an affectation. Many of his Facebook friends were English speakers, and few were Greek. Georgilakis isn’t an especially common surname, and given Yahya’s apparent creativity in self-naming, I tried a few permutations, including the English John, and the vanilla, non-Cretan Greek version of Georgilakis, which would be Georgelas..."

One of the first hits on Google for John Georgelas was an August 15, 2006, press release from the Department of Justice.

“Supporter of Pro-Jihad Website Sentenced to 34 Months,” it crowed. At the time of his conviction, he lived in North Texas, near Plano,a short drive from downtown Dallas, toward the Oklahoma border.

Shortly after his probation expired, John Georgelas had posted a résumé online listing as his address an elegant brick house with white Doric columns, a small portico, and a circular driveway.

In August 2015 the writer visited GeorgiLAS  home . "As I approached the front door, I spied a yellow-ribbon decal (“We support our troops”

in the window, and behind it a foyer, tidy and richly decorated, and a piano festooned with family photos..."  , he writes.

The man who answered the door was Timothy Georgelas, John’s father and the owner (with his wife, John’s mother, Martha) of the house. Both parents are Americans of Greek ancestry.

Tim is a West Point graduate and a physician. He has a full head of gray hair and soft features that betray no sign of the stress of having raised an Islamic State terrorist.

He stared at the magnolia tree in the front yard and said nothing. I told him what I knew—that his son, John, was Yahya. Tim sat, lips pursed, and with a shake of his head began to speak.

“Every step of his life he’s made the wrong decisions, from high school onward,” Tim told the writer  . “It is beyond me to understand why he threw what he had away.” Yahya’s two sisters have both earned advanced degrees, he added, as if to demonstrate that it wasn’t failed parenting that led his only son to drop out of school, wage holy war, and plot mass murder.

“He was always the youngest kid in the class, and always a follower,” Tim said.

The Yahya Tim described to me, was a sad figure, a sheep who had strayed into a wicked flock.

Above all, he was easily manipulated. This, for me, was another puzzle. The Yahya I had encountered online, and the one Musa Cerantonio described, was nothing like a sheep, and no pathetic follower.

He was not the boy his father described. At some point, Yahya had shape-shifted into a wolf, into a leader of men. 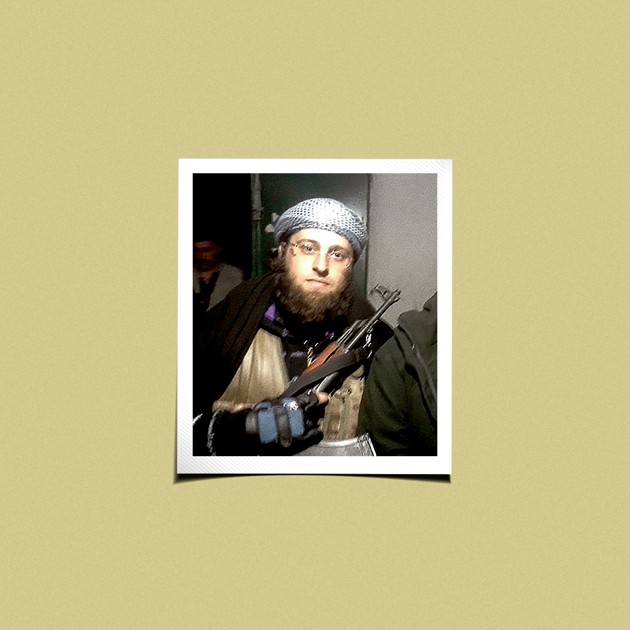 John Georgelas, aka Yahya Abu Hassan, in a photo that appeared on his website, which featured jihadist writings in English and Arabic.

In December 1983, John Thomas Georgelas was born into a wealthy family with a long military tradition. His grandfather Colonel John Georgelas was wounded twice in the Second World War and worked for the Joint Chiefs of Staff.

Tim Georgelas spent three years in the U.S. Army, then accepted an Air Force commission to attend medical school. He retired as a colonel in 2001, and now practices radiology in a north-Dallas breast-imaging clinic. He is politically conservative, as is Martha, Yahya's mother,  Tim's short, dark-haired wife, whose Facebook cover photo shows her standing proudly in front of the George W. Bush Presidential Library, near downtown Dallas.

The Georgelases moved frequently during John’s youth, as Tim’s military assignments required. John entered school at the age of 4, while the family was living in England, and he was young and small for his class. He was sickly—he grew benign tumors and had brittle bones—and his infirmities may have pushed him toward religion.

When he was 11, his leg shattered, and he spent a long period out of school, recuperating. Lonely and depressed, his mind turned to God in idle moments, and he became attached to the Greek Orthodox Church. He hounded his family into attending services more regularly.

As the family’s male heir, John enjoyed a special status in the Georgelas patriarchy. With that status came expectations, and therefore disappointment when it became clear he was unsuited for a soldier’s life. His body refused to grow into robust, battle-ready form. His temperament wasn’t suited to military discipline. When he returned to school after his leg injury, he had little interest in academic achievement or rule-following. His father tried repeatedly to correct his behavior and failed. (This account is drawn from sources close to John, including family members, co-workers, friends, and correctional officers.)

Like many a military brat before him, John experimented with the counterculture. He smoked pot, dropped acid, and ate magic mushrooms. He hated his father for punishing his drug use and hated the U.S. government for criminalizing it. By the time he graduated from high school, his primary interest was the voracious consumption of psychedelics. His grades were miserable, Tim says, but his standardized-test scores were better than those of his high-achieving sisters. John ended up studying philosophy at the College Station branch of Blinn College, an open-admission junior college in central Texas. He passed only a few classes.

In a class on world religions at Blinn, the instructor’s cursory lecture on Islam annoyed him, so John sought more information from local Muslims. Curiosity turned to something more.

A few days before Thanksgiving 2001, on the first day of Ramadan, John converted at a mosque in College Station frequented by foreign students from Texas A&M.

Whether the conversion was meant to spite his parents, or whether spite was just an ancillary benefit of his spiritual salvation, it is not possible to say.

But the timing is suggestive. When John uttered the Muslim declaration of faith, the ashes of the World Trade Center were barely cool. Anti-Muslim sentiment in America was reaching new highs, and in central Texas, conversion to Islam would have been a singular act of rebellion.

John’s parents found his conversion to be a sign of mental weakness. “Every university town in this country has a mosque for one reason,” Tim told me. “Kids are away from home for the first time, vulnerable and subject to influence. They hear the message and they’re hooked, and that’s what happened to John.”

John took the name Yahya, and sold his pickup truck to buy a plane ticket. In December 2001, the family received an email from Yahya announcing that he was in Damascus learning Arabic.

Western jihadists find their way to violence many different ways, but they often match a profile. And that profile fit John like a wet suit.

He came from an upper-middle-class family. He squandered opportunities commensurate with his innate talent; he recognized that he would not excel in the fields chosen or glorified by his parents and authority figures. Often, a personal crisis—a death in the family, a near-death experience of one’s own—triggers existential contemplation, leading to religious exploration; in John’s case, his childhood frailty might have filled that role.

After he turned away from his wife and children that day in 2013, Yahya added a new and unlikely chapter to the Georgelas military tradition. For several months, he trained as a soldier as part of an Islamic State–aligned group near Aleppo. He saw battle there, and during combat in April 2014, a mortar blast sent shrapnel into his back, nearly severing his spine.

“I was in immense pain,” he wrote on his website, “but I at least knew that my reward is with Allah and that comforted me greatly.” He spent time in a hospital in Turkey. Then, fearing detection as an American (he could pass as Syrian, but not indefinitely), he went back to Syria  Yahya posted images on Facebook of his suppurating wounds and of himself on bed rest, smiling.

The scars are, for him as for other jihadists, a VIP pass in the afterlife, a badge of honor that shows his commitment to God during his time on Earth.

The Islamic State has staked its survival on creating a revolutionary Muslim mass movement—one that can compensate for its loss of territory in Iraq and Syria by rising up elsewhere.

With Yahya it lends an American accent to its universal jihadist message, and a speaker whose strengths, weaknesses, personality, and insecurities are deeply American as well.

He knows how to speak to Americans, how to scare them, how to recruit them—how to make the Islamic State’s war theirs.

It is unknown how far Yahya’s role extends beyond keyboard jihad. But clues have very recently emerged, pointing toward an extraordinary possibility. 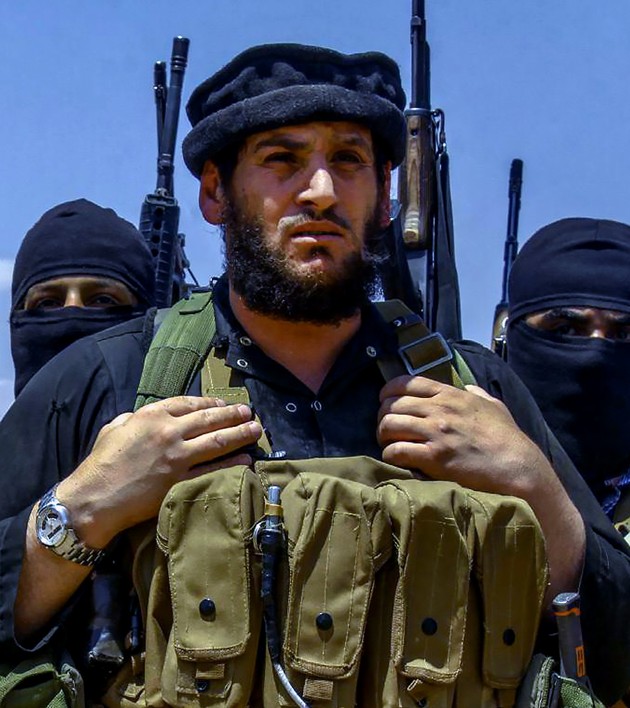 Abu Muhammad al-Adnani, the Islamic State's spokesman and second-most-powerful figure, shown here in an undated photo, was killed by a drone strike in August. In December, an Islamic State member with a name matching Yahya's was announced to succeed him.

find that on our fully updated page  AegeanRefugee No Way Out

source:From the Atlantic article which is adapted from Graeme Wood's new book, The Way of the Strangers: Encounters With the Islamic State.