Does Turkey open up its camps?

The 200 migrants claimed, according to media reports by Greek authorities and Police information,  that they were held in closed  accommodation camps in north-west Turkey, camps that have been abandoned by the authorities in recent days.

According to Greek state news agency ANA-MPA, thousands of Africans who had reached coastal Turkey recently were looking into ways to crossing to Greece.

The news agency had recently reported that a Turkish human trafficking ring operating from Istanbul was allegedly charging 300 to 500 euros per person for passage to Greece, where refugees and migrants were told to "just ask for asylum."

“there are thousands of migrants from north and central African countries in Turkey awaiting to cross to Greece and Europe” and that “nobody hinders them to get on board.” wrote Athens News Agency, adding that the smugglers encourage them to do so claiming “all they need to do upon their arrival is to ask for asylum and then everything will be easy.”

After the  high pressure to Greece's politicians by the Aegean isles inhabitants who face day to day the burden of refugee influx to become more heavier by thousands being stucked for monhts in the isle,  interior ministers, the EU Commission  and Greek Migration Minister Yiannis Mouzalas sent a letter to the EU on Friday, asking fro permission for the island;s decongestion and  stressing that migrant over-population remains a big problem on islands such as Lesbos and Chios in the Aegean Sea.

The letter said, the Greek government believes that migrants from countries where there is a low chance of getting asylum - Pakistan, Morocco and Algeria - should be transferred to "pre-removal centres in the mainland" where they shouldl be kept under tight security before being returned to Turkey.

It says that such action "will only be short term" and will not affect those who have refugee status.

"Your support is requested to make the  emergency action possible, to help decongest the islands smoothly, effectively and immediately," the letter says.

The Aegean islands' No way out

Worries of the Greek islanders reach their peak for the coming months, and the possible untreatable crisis of new refugees influx numbers, as Turkish President Tayip Erdogan has threatened Europe that three million migrants are waiting on the Turkish shores to cross Aegean to Greece.

Since March, Europe has been working on a double strategy to deter mass migration, when the EU-Turkey deal was signed : close Balkan borders to Greece’s north and send people who land in Greece back to Turkey for processing.

But after the EU denial of the free visa providance to Turkey, Erdogan made clear his threats, which has extensively paniced the Greek community and government

Lesvos and four other Greek islands near Turkey’s coast have been turned into holding pens for people crossing the Aegean in small boats. 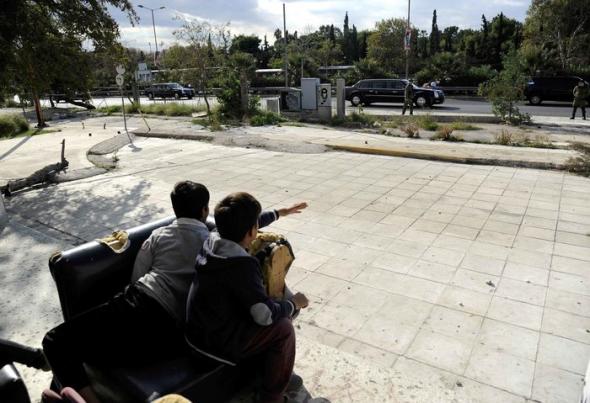 from Obama's visit to Athens: two migrant children watch from close the US President\s arrival,

while streets in Athens are closed  due to security

This is probably what seems to be the EU claim, for not allowding migrants' transfer from isles to the mainland :

As many as 13,000 people who registered in Greece’s migrant camps are unaccounted for and could have slipped north into Europe, according to European immigration officials. WSJ wrote on Dec.7.

By official numbers, as greek2m.org has written since September 2O16, Greece says nearly 63,000 migrants are stranded in camps and awaiting processing on the islands and mainland but some thousands of them are missing .

The  recent findings, were  shared with The Wall Street Journal after the officials completed a review of Europe’s Aegean frontier.

The immigration officials, who aren’t Greek, said the whereabouts of about 50,000 of those is known.

The others “have not been monitored for months,” said one of the officials who took part in the review. They could have made their way to the Greek mainland, or on through the Balkans, or be in Northern Europe by now, the official said.

These people are referred to as “no-shows,” since they haven’t turned up at migrant-processing centers. “No one knows where the ‘no-shows’ currently are,” said another official. “No one knows if they have already left the islands, or don’t show up in the hope that something will change for them.”

EU calls countries to sent their migrants to Greece, though

In the mid of Erdogan's threats , though, the European Commission announced on December 8, 2016, that EU countries should be able to gradually return asylum seekers to Greece under EU asylum rules, as of mid-March 2017, an announcement strongly dennounced by Human Rights Watch on Friday, Dec.9

The announceent came while National courts in a number of EU states have blocked returns to Greece, after the European Court of Human Rights ruled in 2011 that deficiencies in the Greek asylum system and its degrading treatment of migrant detainees meant it was not safe to return asylum seekers there. The EU’s own Court of Justice has also ruled against transfers.

“It’s astonishing that the European Commission thinks asylum seekers should be sent back to Greece, where thousands are already suffering as a direct consequence of the EU’s policies,” said Eva Cossé, Greece researcher at Human Rights Watch. “Instead of adding to Greece’s burden, EU governments and institutions should be working to alleviate it, by relocating asylum seekers from Greece to other EU countries.” 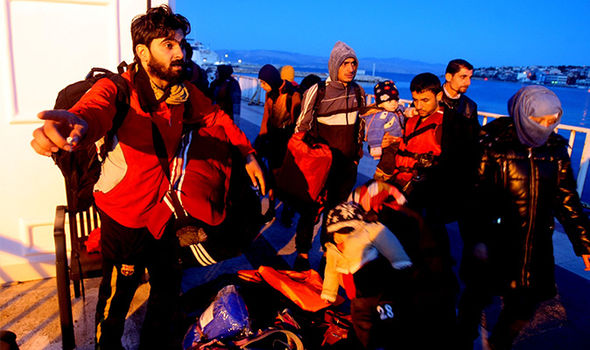 Europe so far commits only in 5% of relocation obligations

European countries have relocated only one in 20 of the refugees they promised to shelter, amid continuing deep divisions over how the continent should help growing numbers fleeing war and persecution.

More than a year after the EU promised to disperse 160,000 refugees from overstretched Greece and Italy to other EU countries, only 8,162 people have been found a home, figures from the European commission show.

The latest commission data also shows that 748 people have been sent back from the Greek islands to Turkey under a controversial deal between Ankara and the EU, which has helped to sharply reduce migrant flows.

Under the one-for-one deal agreed in March, the EU promised to shelter one Syrian refugee living in Turkey in exchange for sending back someone denied asylum in Europe.

In May, the European commission called on countries that refused to take in asylum seekers to pay a €250,000 (£212,000) “solidarity contribution” for every person Brussels thought they should take. The Visegrád quartet of central European states denounced the idea as blackmail.