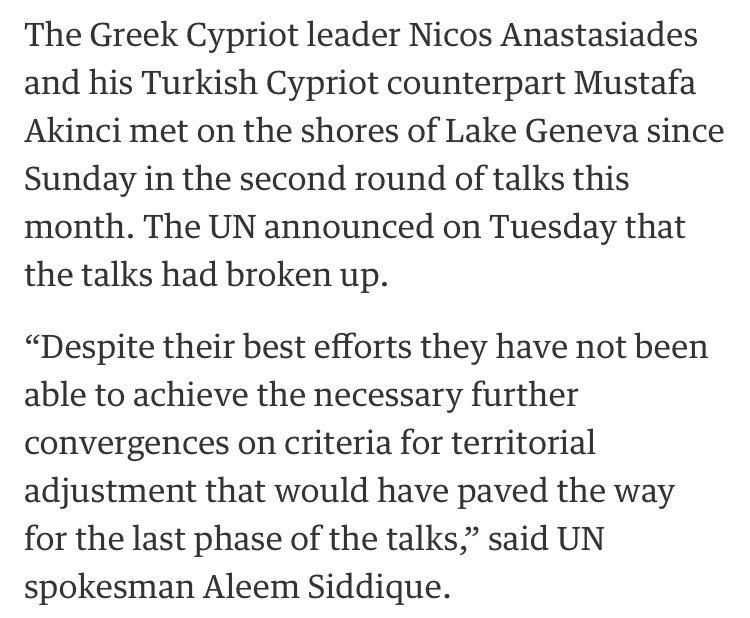 Cypriot President Nicos Anastasiades said on Thursday he rejected a proposal by the Turkish-Cypriot side to connect the issue of territory with the issue of security and third-party guarantees.

This month both Cypriot President  and the Turkish Cypriot leader Mustafa Akinci were engaged in intensive talks focusing on territory, in Mont Pelerin, aiming to agree on the criteria for territorial adjustments. The talks ended inconclusively.

Speaking at a televised press conference, Anastasiades said he does not want to start a blame game over the collapse of the two-day talks in the Swiss town of Mont Pelerin, but added

“he will not allow the responsibility to weight on the Greek-Cypriot side”.

“The agreement achieved in the first phase of Mont Pelerin was crystal clear,” he said, noting that the two sides would discuss the three criteria

In the first phase, they agreed on some territorial adjustments, he explained, but in the second round they failed to narrow their differences.

Despite the current impasse, Anastasiades announced he’s ready to continue negotiations with the Turkish-Cypriot side and thanked Prime Minister Alexis Tsipras for his support

.“The aim is to solve the Cyprus problem, the struggle will continue. Non-solution is not a solution.” 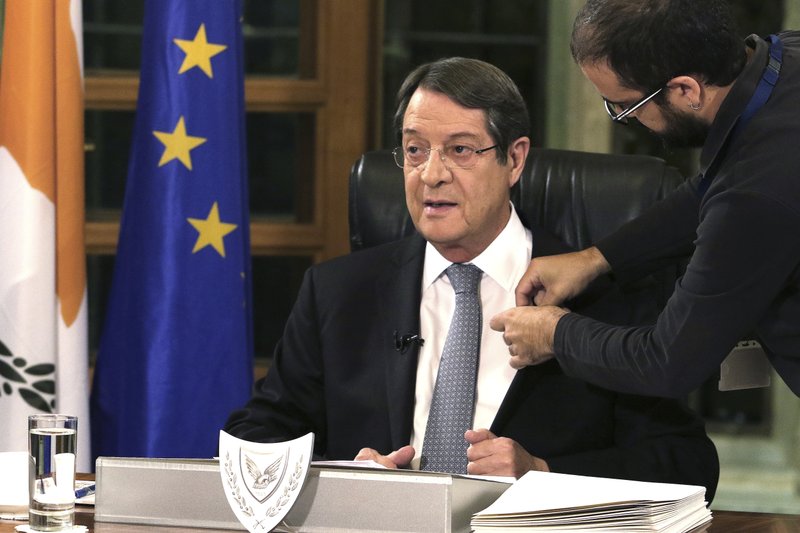 Turkish side not flexible , said Anastaises

CyprusPresiden said openly during the TV press confernce that  the Turkish side had not shown flexibility on the issues during the talks but he would simply state the facts of what had happened in Switzerland , avoiding to erngage in blame.

He stressed that although  there had been some encouraging developments at the talks,  key differences remained and that he himself had continued making counter proposals until the eleventh hour on Tuesday, Novembr 22

He began with a rundown of the Mont Pelerin talks and continued with a Q&A, focusing on the territory criteria that centered on the area for each constituent state, the number of refugees that were to return, the length of each constituent state’s coastline, and the reflection of all this on a map.

Agreement on these, was to lead to a multi-party conference on security and guarantees with Greece, Turkey and Britain.

He said that as regards the number of refugees that would return to the north, even though the United Nations had estimated that the numbers, based on the expanse of the areas that would be returned, could be between 78,247 people minimum, and 94,484 maximum, the Turkish Cypriot side said they would not accept more than 65,000 people.

It was apparent, the president said, that the Turkish Cypriot side wanted to link the territory issue with that of security and guarantees.

“As it was expected I rejected this proposal,”

the president said. Anastasiades reiterated that the Greek Cypriot side would not agree to a multi-party conference unless territory criteria was applied on a map, as per the agreement of the two sides.

“The non-solution of the territory issue would lead to linking the issue with that of security and guarantees, which is the Turkish side’s aim,” Anastasiades said.

If no agreement was reached on territory, he said, the Greek Cypriot side would find itself in a multi-party conference where it would be pressured to agree to proposals of the Turkish side as regards guarantees in exchange for concessions on territorial adjustments.

Asked whether the return of Morphou was discussed specifically, the president said that the number of refugees that would return under Turkish Cypriot administration, pre-defined which areas would be returned. The reduction of this number by the Turkish Cypriot side, he said, was such so as to avoid retuning some areas. The president refrained from saying which areas these were.

Anastasiades said that in order to achieve a solution that is acceptable to both communities it should meet the principles and values of international and European law and allow the establishment of a viable, functional and modern European state.

He said has not spoken to Akinci since their return to the island.

According to reports in the north, Akinci had on Wednesday a telephone conversation with Biden, where he informed the US vice president on the talks and the positions of the Turkish Cypriot side.

Obama statements on Cyprus while in Athens

Journalist Michael Ignatiou, during the joint press conference of the Greek Prime Minister and Barack Obama asked the American President: "How could you convince the President of Turkey to end the occupation of Cyprus?"

US President escaped totaly any reference to the term occupation, had and said that "this is a negotiation between Cypriots. Between Turkish and Greek Cypriots. There are two leaders sincerely committed to find a compromise and a sustainable solution that would benefit both peoples, "as he argued, adding that" we want a solution that would ensure parity. "

Obama said that an agreement will be achieved when "the thought of the two leaders meets at a common point " and not when the occupying troops withdraw and the international law would be applied. Fortunately Alexis Tsipras difeerentiated his stance and emphasizing that "the Cyprus issue is not a bilateral problem, it is an international problem, an illegal invasion and occupation of the northern part of Cyprus."

By 1974 the Turkish invasion of Cyprus had resulted in the loss of 3,000 lives and thousands injured. Until this day there is still unconfirmed accounts of how many people went missing.In February 1975, less than one year after the illegal occupation of the island, Turkey announced the occupied land as the so-called “Turkish Federated State of Cyprus,”

the UN support  to the efforts of bridging the differents

The Cypriot leader will discuss developments on the phone with U.N. Secretary General Ban Ki-moon on 22:00 (Greek time), while earlier he spoke with U.S. Vice-President Joe Biden and the President of the European Commission Jean-Claude Juncker.

In a written statement, Ban Ki-moon urged both leaders to “do their utmost to overcome this obstacle and finalize the promising work undertaken in Mont Pelerin” and avoid statements and actions that will hinder the resumption of talks.

Espen Barth Eide, the UN Secretary General’s Special Advisor on Cyprus,  announced that he will return, indeed  to the island next week to assure the UN's support the leaders' of the two communities in Cyprus efforts.

Eide is expected to meet Cyprus President Nicos Anastasiades and Turkish Cypriot leader Mustafa Akinci, who concluded two-days of intensive negotiations in Mont Pelerin on territory, which did not lead to the aim of the agreement on the criteria of territorial adjustments.

“The game is not over,” the same sources have told Cypriot News Agency CNA, adding that “the UN will regroup and continue” their efforts. “We need to pick up where we have left,” they noted.

They also pointed out that the UN would like to see the two sides reflecting on what has been achieved so far and decide how they want to proceed.

“Everybody is supporing them,” the UN sources  stressed.

Anastasiades and Akitnci have been engaged in peace talks since May last year with a view to finding a negotiated settlement that would reunite Cyprus, divided since the 1974 Turkish invasion.