Greek Debt-Relief Expectations From Obama dimmed before his arrival 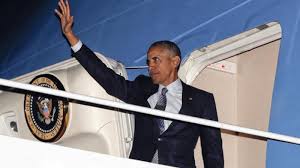 Greek government set high expectations on U.S. aid for debt before the Obama arival in Athens, who is expected to land  around 11.00 am Greek time.

But U.S. President Barack Obama’s visit to Athens may not yield what Greece had hoped for, wrote Bloomberg on Tuesday November 15 morning.

Greece , indeed, put debt-relief discussions at the top of the agenda for Prime Minister Alexis Tsipras’s meeting with Obama as was Greek gernement representatives extensively expressed before the US President  visit .

But after  Donald Trump’s victory, Obama’s ability to influence creditor discussions may be limited even after he advocated “meaningful debt relief” for Greece in an interview on Nov. 13 with the nation’s newspaper of record, Kathimerini, the Bloombe notes

Greece may be overselling what Obama, who threw his weight behind Trump’s Democratic rival Hillary Clinton, can really do, said Dimitris Keridis, professor of international politics at Panteion University of Athens.

“Greece’s government is trying to make as much capital out of the visit as possible, setting the threshold too high,” Keridis said. “Obama is still the president, but the truth of the matter is that power is already shifting towards the transition team that Trump is putting together.” What’s more, “the key” to a debt solution “is held by Berlin, rather than Washington,” he said.

Euro-area finance ministers are expected to discuss short-term measures for easing repayment terms on Greek debt, which accounts for more than 170 percent of its economic output, during a meeting on Dec. 5. While the euro area agreed in May to look at ways to chip away at the burden, they have made little progress apart from starting technical work on the short-term interest-rate protection.

Obama, who is meeting with Tsipras on Tuesday and addressing the Greek people on Wednesday before heading to Berlin, may not have much leverage within Europe to be able to affect Greek debt relief, Keridis said.

“The U.S. is there to offer advice, guidance and support and a lot of leverage to the IMF, but that’s it,” he said. “The huge bulk of Greek debt is held by EU taxpayers and has to be resolved in the EU chancelleries. The Trump victory has increased the fears of a backlash in Europe, which makes European politicians even more fearful of appearing soft.”

The Obama administration has been in favor of Greek debt relief, with officials like Treasury Secretary Jack Lew and Vice President Joe Biden asking for a sustainable solution in the past.

In his interview with Kathimerini, Obama reiterated that support.

“I will continue to urge Greece’s creditors to take the steps needed to ensure Greece is well placed to return to robust economic growth, including by providing meaningful debt relief,” Obama said. “Getting that done would not only fuel the Greek economic recovery; it would also show that Europe can make its economy work for everyone.”

While Obama pushes for a resolution on the Greek impasse with its EU creditors and the International Monetary Fund, the real question is what President-elect Trump’s stand on the issue is, Keridis said.

“We don’t generally know much about the Trump administration,” he said. “But the fact he has surrounded himself by some extremists is not a good sign. ”