The German Finance Ministry is preparing for all possible scenarios regarding how the global markets will react in the event Trump becomes President, despite market analysts assuring that a Trump win would not cause any turmoil in the global financial system., protothema wrote on Tuesday, Novemmber 8, the day of the USElections

However, a question that remains unclear is how a new US administration would approach the Greek debt crisis regarding its cooperation with one of the creditors involved in the program, the IMF. Will a Trump government continue to support the Europeans on the Greek matter, or will he abandon the policy adopted by the Obama administration on the issue, asks the protothema article ?

The German Foreign Ministry has also expressed reservations regarding Trump’s approach to matters of global security after the Republican candidate’s statements that he would consider withdrawing the US from NATO.

What has become apparent is that if Trumps wins the elections, the Europeans will have to assume more responsibilities on matters of international foreign policy and not simply tow the line of the US.

Hillary and Trump Remarks about Greece

Many Greek-Americans have taken a stance for or against the two presidential candidates who are battling it out again on Wednesday. However Donald Trump and Hillary Clinton have not said much about Greece and their stand regarding the Greek crisis, the overall role of the country on the global stage as well as some of the so called Greek issues including the Macedonia name dispute with FYROM, as well as Greek-Turkish relations.

"I'd stay back a little bit; I wouldn't get too involved," Trump said in an interview with Fox Business' Maria Bartiromo.

“I would stay back a little bit, I wouldn’t get too involved,” he replied when asked what he would do if he were president. “We get too involved with other things I mean, I would definitely stay back,” he said.

“We have enough problems, let Germany handle it…

"Germany will ... take care of it. Frankly, Putin probably comes in to save the day if Germany doesn't."  Trump added, "So I think that Greece is going to be in better shape than people think."

“Greece is a NATO ally and a European Union member, and the U.S. has a great, active, successful Greek-American community, so I want to see a resolution,” Clinton said. “Obviously, at the end of the day, it is up to the Greek people to decide what they are willing to do, and I hope that we can see an outcome here that will actually help Greece recover and keep them in the euro zone,” she continued.

The advisors' of the two view

“Hillary Clinton knows Greece. She’s spent quite a bit of time there since the time she was First Lady. She has very deep and broad relationships with the Greek-American Community. She’s been to our Patriarchate. She brought her husband there, the first sitting U.S. President ever to visit the Patriarchate,” Kounalakis said.

“He truly cares for Greece,” says the young Greek-American who is the face for Greeks for Trump and helps the Trump campaign to reach out to Americans of Greek descent.

“We don’t need anybody’s sympathy, but action, we are proud for what we have achieved in the States” said Marafatsos during an event in Nevada referring to Clinton’s stance on Greece.

Marafatsos says that Trump has made mistakes like anybody else would during a Presidential campaign, but he is the guy who apologises.

“I believe that if he makes a mistake he offers an apology and accepts responsibility,” this is the kind of President I would want.”

Both Greek American political advisors agree though on one thing: The Greek community can play a significant role in this election, given that as many Greek Americans as possible get out and vote no matter what party they support.

When a schoolgirl asked Hillary about Greece

Hillary Clinton Called Me Smart when I asked about Greece . I met her at school :Here is our conversation:

“Last year, I went to Greece and I saw the refugees. It made me very sad that they were living on the streets with no food and little water. The only ones helping were Greeks. The Greeks, themselves, are suffering from an economic crisis. When you are President, will you help Greece and the refugees?” I asked.

“I don’t know yet, but, I promise I will find a way to help.” Mrs. Clinton said.

“I want to change the world, do you have any advice for me?” I wanted to know.

“You should pay attention to other people and how they act. Noel, you must do very well in school. Listen and watch. When you are older, volunteer to help people.” She then said something that made me want to do a happy dance. “Noel, you are a very smart girl.”

OMG!!! I just met Hillary Clinton! Did she really just tell me I was smart? Smart? How smart? Smart enough to be a child ambassador? Great! I’m available!

What are the Greek-American saying about their vote

Astoria remains the heartland of the Greek-born members of the New York diaspora, although many have moved to Queens and Brooklyn. A lot of the property in the area which houses coffee shops, restaurants, grocery stores, pharmacies and tyre fitting businesses is still owned by Greeks. During a recent visit to Astoria, Kathimerini conducted a quick poll among Greek-American voters: Will they support Democratic presidential front-runner Hillary Clinton or her Republican rival Donald Trump?

“I am for Trump. He is a billionaire [and] he is a successful businessman, which is in stark contrast to the politicians we are used to, who are not fond of hard work,” said Panayiotis Doukas, who has lived in America for more than 50 years.

“Trump is not part of the establishment and has what it takes to purge the system of corruption,” said Doukas, who has worked in the restaurant business.

His views are shared by Nikos Stergiou, with whom Doukas takes his morning coffee at the Artopolis bakery and cafe. A former sailor who moved to the US in 1967, Stergiou is also a veteran NY police officer. “I have voting rights here. This is something I fought for. But I am not sure I will go to the ballot this time,” he said.

“I predict that Donald Trump will win this election because Americans want to turn their backs on the establishment,” Stergiou said.

Prompted by developments in Greece, many Greek Americans are drawn to Trump’s assertive profile. “Trump is a tough guy. I used to be a member of the Democratic Party, but my ideas have changed. I will vote for Trump because he does not want America to become a free-for-all and has set border security as a top priority. When we read here that migrants in Greece have occupied the railway tracks, stopping train traffic at Idomeni, it makes our blood boil,” said Christos Skarlatos, originally from Thessaloniki.

“Here in the US, the Greeks worked real hard, they respected the law and they won their place in society. So Trump and Trump only,” he said.

According to surveys, Trump’s voters are mostly white males angry at the current political system, while Clinton is popular with women and African American voters. Although they are irked with developments in Greece, Greek Americans plan to vent their frustration at the US ballot.

However, what will happen if the Republican candidate, who has in the past made outrageous comments about migrants, takes a hostile stance toward Greece? “He has no reason to do so,” said Giorgos Papadopoulos, who moved to Astoria five years ago to work as a cantor.

“Besides, even Bush and Clinton, who were seen as friends [of Greece], did not always act accordingly,” said Papadopoulos, who occasionally also works as a furrier so he can help out his children back in Greece.

“I will vote Trump because women must look after their family, and not engage with politics,” said Evlalia. Liquor store owner Irini Gounari begs to differ.

“Listen, I am a member of the Democratic Party and I would really like to see a woman in the White House, in the way that black voters wanted to see a black president. However, the attacks that Trump has had to encounter from his own party have made me want to back him instead.”

Costas Trahanidis has for years worked at a supermarket that sells Greek products. He thinks Trump is likely to win and so does Aris Papadakos, who recently opened a big grocery store in the neighborhood.

Is anyone rooting for Hillary? Few seemed to be that morning. One of them was Kyriakos Moutafopoulos, who runs a small grocery store, and who decades ago moved to America from Kurtulus (or Tatavla), then a predominantly Greek neighborhood in Istanbul.

“I have always voted Democrat and I will now vote for Hillary,” said Panayiota Pelegari, who runs a clothing repair shop. “I believe in women because they are hardworking. I want Hillary to win.”

This spontaneous, unscientific poll in Astoria does not give a 100 percent accurate depiction of its Greek-American population or the diaspora in general. But it is indicative of the way in which Greek Americans tend to see the US elections in light of developments in Greece. 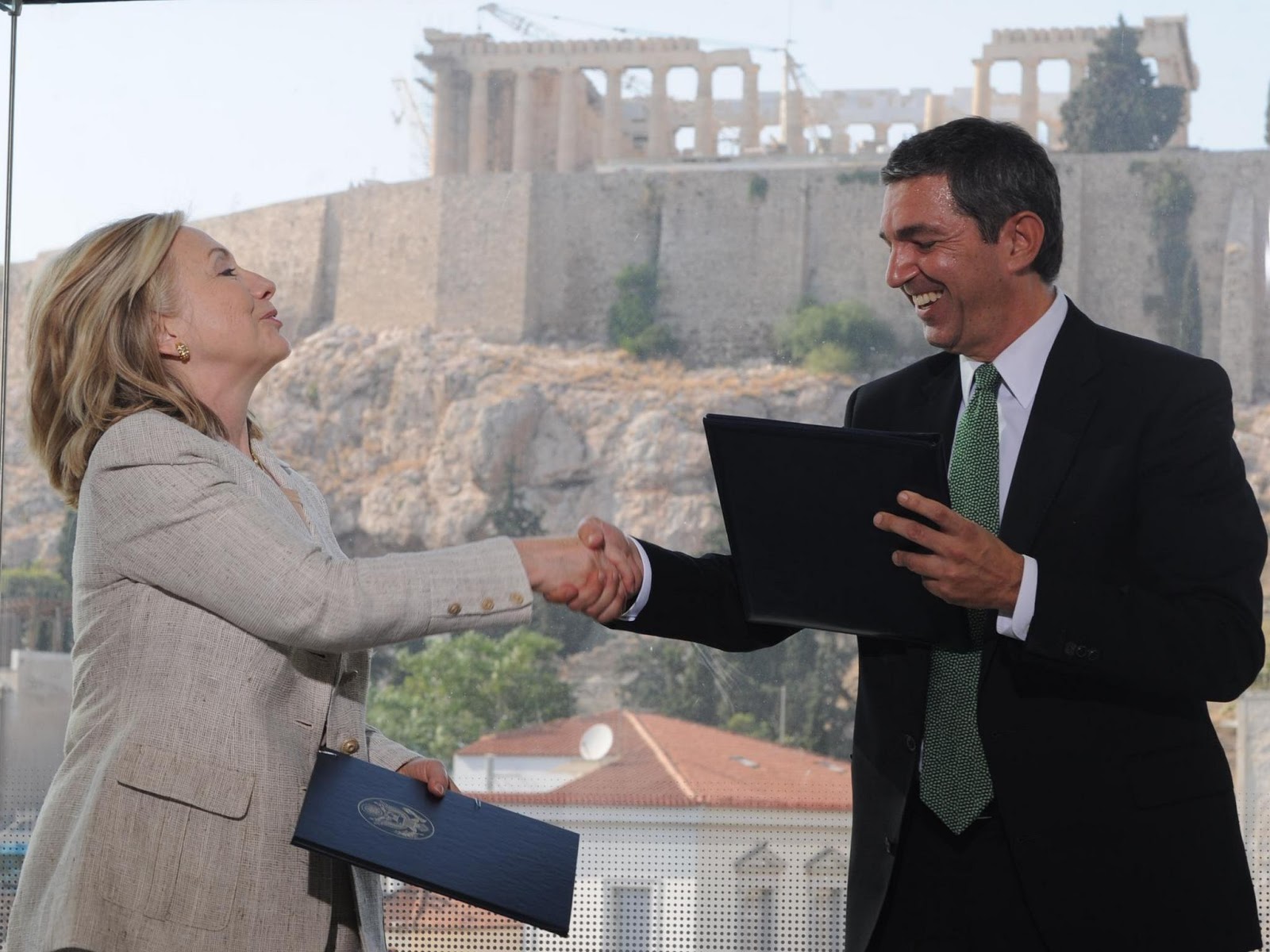