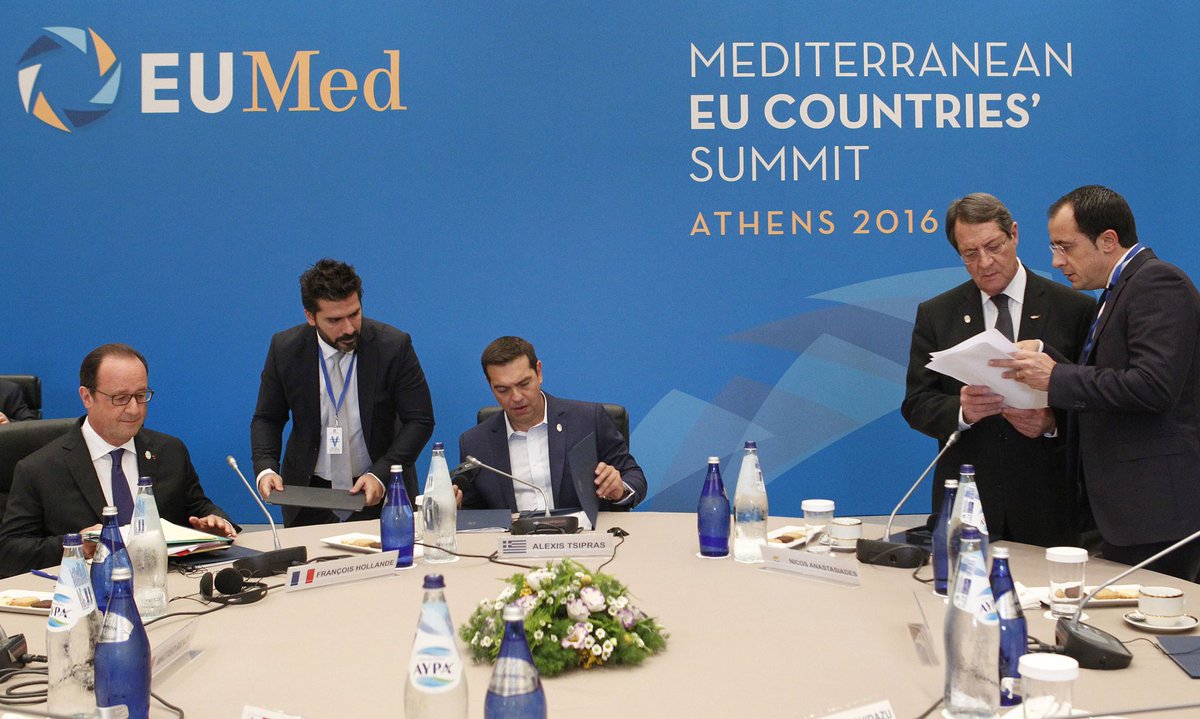 The heads of state and government of the European Union's seven Mediterranean member-states - Cyprus, France, Greece, Italy, Malta, Portugal and Spain - on Friday adopted the text of the Athens Declaration, following their meeting in the Greek capital.

In this, they stress their commitment to European unity and their belief that the Bratislava EU Summit on September 16 must "lay the political foundations" for a new vision for Europe.

The full text of the Athens Declaration is given below:

"We, the Heads of State and Government of the Republic of Cyprus, France, Greece, Italy, Malta, Portugal and Spain, have gathered in Athens, with the aim of enhancing our cooperation and to contribute to the dialogue on the future of the EU.

We underline our strong commitment to European unity and our firm conviction that, by acting together, our countries are stronger and European citizens in a better position to control their future.

We respect the desire of the British people expressed in the recent referendum. The notification of the UK intention to withdraw from the EU should be done as soon as possible. In the future, we hope to have the UK, as a close partner of the EU.

We are convinced that the European Union needs a new impulse in order to address the common challenges the Member States are facing, upholding its values of freedom, democracy and rule of law, as well as tolerance and solidarity.

This vision for Europe must be based on concrete measures that will contribute to the security of European citizens and improve their lives, assert Europe’s global and regional role, improve the functioning of European Institutions and ensure their democratic accountability. Culture and education should be at the core of Europe’s actions, in this framework.

Furthermore, we firmly believe that, in the interest of Europe as a whole, our common European project be built upon a perspective for the Mediterranean as a region of peace, stability and prosperity

We believe that the informal Summit in Bratislava on 16th September should lay the political basis for this new vision, the essential priorities for the future, as well as an agenda with concrete initiatives to be adopted.

In this framework, our countries propose the following priorities and measures:

1. Ensuring the internal and external security of Europe

The EU must strengthen our capacity to guarantee the security of our citizens and our territory and live up to our responsibility to respond to crises and act for peace and stability in our environment and in the world, in support of a Common Security and Defence Policy and in full compliance with the UN Charter. To this end, we need to enhance our cooperation and our commons means in the areas of security and defence, in a spirit of solidarity.

Respect for the sovereignty and territorial integrity of states as well as the inviolability of borders must remain fundamental principles for the EU.

In this respect, we support the negotiation process, for a just, viable and comprehensive settlement of the Cyprus problem, without guarantees, based on the relevant UNSC resolutions and the status of Cyprus as an EU member state.

In particular, the European Union should:

- Ensure the protection of its external borders, through systematic controls, necessary technologies, the interconnection of relevant databases and the effective establishment of the European Border and Coast Guard before the end of the year;

- Decisively strengthen cooperation in the fight against terrorism, by providing the necessary tools, especially in the fields of police and justice, as well as developing cooperation to address the phenomenon of radicalization, including through promoting a concrete initiative to enable investment in the regeneration, planning and adequate policies for the peripheries of European urban cities. Intelligence sharing should be enhanced, notably by creating a dedicated platform for real time and multilateral exchange. We will also strengthen cooperation with Mediterranean partners;

- Re-energize its Common Foreign and Security Policy in line with the Global Strategy for strategic guidance and scale up diplomatic initiatives for conflict-resolution and crisis-management, also taking into consideration lessons learned;

- Develop European military capacities and the defence industry with a view to reach strategic autonomy, notably through a European research program and a fund for security and defence and set up progressively a EU planning and conduct capability for European CSDP missions and operations. Full use should be made of the Lisbon Treaty’s potential.

2. Reinforcing the cooperation in the Mediterranean and with African countries

Our partnerships with Mediterranean, and with African countries, are essential for our common security, stability and prosperity.

- Scale up all its cooperation and financing with a view to support the efforts of our partners to ensure their own security, to fight against irregular migration and to foster their economic development;

- In particular, upgrade the external dimension of EU Migration Policy and integrating it into EU external and development action. On this basis, and taking into account the La Valetta Action Plan and other relevant frameworks, efforts to implement the Partnership Framework on migration and conclude compacts with countries of origin and transit, must be stepped and adequately financed ;

- Enhance diplomatic efforts to solve crises and to contribute to peace and stability in its neighborhood.

3. Fostering Growth and Investment in Europe

Europe must keep its promise of prosperity and social justice. We need more growth and more investment to overcome the economic crisis, create jobs, protect our social model and prepare the future of our economies. We are determined to uphold the European social acquis and to promote social cohesion and convergence.

We assert our commitment to the process of European integration and the sustainable development of Europe οn the basis of balanced economic growth, price stability, and a highly competitive social market economy, aiming at full employment and social progress.

In particular, the EU should:

- Foster investment by doubling the financing capacity of the European Fund for Strategic Investment (“Juncker Plan”;), focusing on key priorities such as digital economy, low-carbon projects for energy, including energy interconnections and transport, infrastructure as well as research and training.

- The issue of bottlenecks, where they exist, should be addressed in order to promote investment and foster economic growth for the benefit of all citizens.

- It should be complemented by European policies supporting financing and investment, including the completion of the Banking Union and incentives for investment at national level, as well as policies and regulations for the digital single market, the energy Union and an industrial strategy.

- Promote employment and improved living and working conditions. To this end we need to pursue decisive growth-oriented structural reforms in order to improve the functioning of markets, enhance competitiveness and create jobs.

- Furthermore, investment projects in high unemployment member-states, and cross-border projects of common European interest that foster innovation and market integration, should be promoted.

- Fight against social dumping, by addressing issues related to fraud, abuses and circumvention of rules.

New steps should be taken to increase growth, convergence and stability in the Euro area.

The process of ratification of the COP21 Paris Agreement by the EU and its member states, must be accelerated so that they become parties to the Agreement as of its entry into force.

We need more ambitious initiatives at European level to facilitate mobility as well as access to training and jobs for young people. Europe should in particular extend and amplify the Youth Employment Initiative and broaden the Erasmus program.

5. Addressing the challenge of migration

The effective protection of EU external borders and the orderly management of the asylum and migration policy constitute key challenges for Europe’s future. It should be based on international and EU law and the principles of solidarity and responsibility. Racism and xenophobia cannot be tolerated.

Making the European system for asylum more effective and more convergent, by reviewing the Dublin system on the basis of the principles of responsibility and solidarity, in particular towards the front-line states;

- Stepping up the secondment of personnel to FRONTEX and EASO for the support of the asylum systems of front-line states ; implementing European Council’s conclusions regarding the need to accelerate relocation, which is still advancing at very low rate; pursuing the implementation of the EU-Turkey agreement in order to continue to prevent tragic deaths and migration flows in the Aegean;

We agree to continue our exchange on the priorities for the future of Europe as well as on cooperation in the Mediterranean.

The 2nd Summit of Mediterranean EU countries will be held in Portugal.

Following the meeting and the  press conference at Athens' Zappion Megaron on Friday afternoon, the Mediterranean EU leaders that attended the Athens summit headed for the newly opened Stavros Niarchos Foundation Cultural Centre (SNFCC) in Faliro for some well-earned rest and recreation.

The EU leaders were given a tour of the new facility and discussed cultural issues in a very relaxed atmosphere. Prime Minister Alexis Tsipras and his Maltese counterpart Joseph Muscat departed shortly before 19:00.