Greek Prime Minister Alexis Tsipras said the Turkish officers that requested for Political Asylum after landing with the BlackHawk heli in Greece, would be extradited within "15 to 20 days," Erdogan said Sunday in a speech outside his Istanbul residence, according to CNN international edition News 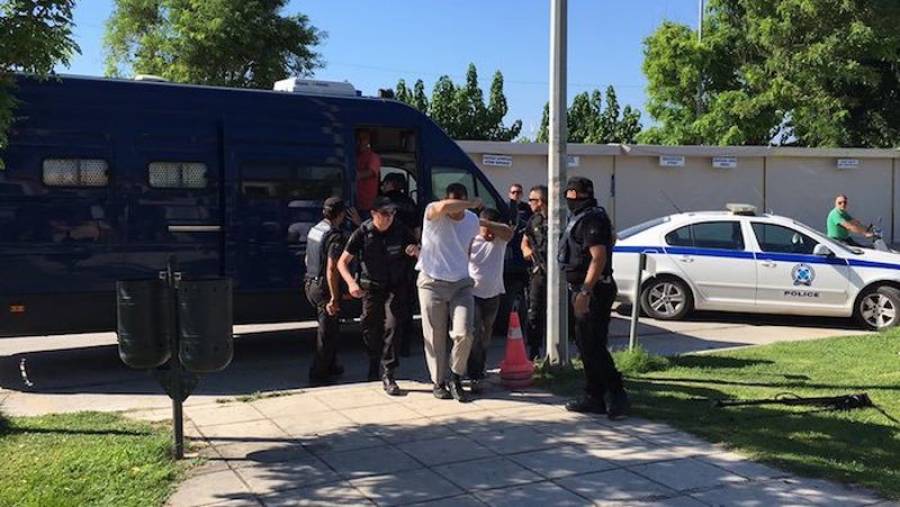 Covering their faces as not to be shown to the Greek and Turkish photographers that were waiting them, the  eight Turkish military officers, passengers of the Turkish Black Hawk helicopter that landed on Saturday at Alexandroupolis airport  appeared to the Greek Alexandroupolis prosecutor pressed charges for illegal entry in Greece

The Turkish officers who have already sought political asylum in Greece were not indicted with attempt to disrupt the country's international relations, something that as one of the suspects' lawyers said, would offer to some to consider the need for their extradition to Turkey imperative.

The charge could not stand because they did not come to raise a problem to the country.

As the Turkish officers' lawers  said,  they claim that they did not take part in the coup in Turkey.

"We don’t know anything about the coup. Our commanders played an active role there, but we didn’t. We were ordered to land two helicopters outside Istanbul. We were transporting the wounded when they started firing at us from the ground. We feared for our lives because they would have executed us, so we decided to flee,” they said.

According to Sputnik News they are  three Majors, three Captains and two Sergeant Majors of the Turkish Army

'They were ordered, a long with two other helicopters, to transfer the injured from the streets of Istanbul to a particular place"  lawyer Menia Polychroni said, strerssing to the media  that they are afraid, not only  for their lives, but also  for the families' members' lives, who  they had  left behind.

All of them are married with children.

The Turkish officers were sent to the detention center at Feres and on Monday will appear before the asylum agency and then  will be sent to court.

Greece's Prime Minister Alexis Tsipras has told Turkish President Tayyip Erdogan that  the procedure the asylum requests of  the Turkish Militants  would be carried out "with absolute respect" to what is stipulated by international law and human rights treaties, according to official Greek government sources , and that the asylum request  would be examined "quickly," during his phone call with Erdogan on Saturday, while the Turkish leader, the same sources said, thanked the Greek PM  for the  Greek government's position on the military coup attempt in Turkey.,

It is  in fact a situation that has stressed Greece's diplomacy response with major diconfort, because it is  Greece, by Alexis Tsipras government,  the country that has raised at most in the last year , the issue of  the human rights of Political Asylum Request, due to the   refugees influx crisis of the million refugees arrivals, who arrived, ironically in Greece, from Turkey .

On the same moment, it was Greece the first country of the western word who supported, as soon as the coup in Turkey took place, on Friday, the "democratically elected governement of Tayip Erdogan" , a position that was later endorsed  by the European countries, but also by the USA and Russia who kept a similar stance , and it was that for which Erdogan expressed his thanks to Alexis Tsipras over the phone on Saturday , the Greek government's sources have stressed

But the Turkish leader is asking for the 8  officers, (and the helicopter )to be returned to Turkey, which means refusing the political asylum and extradite them,  posing Alexis Tsipras a huge dilemma , very fragile to be handled, which seriously challenges Greece's diplomacy and stance.

The Greek Foreign Minister Mr. Kotzias  talking on the phone with his Turkish counterpart  Mevlüt Çavuşoğlu  reiterated  the Greek government’s view that the attempted overthrow of the democratically elected Turkish government constitutes a punishable act.

With regard to the request for asylum, Mr. Kotzias stressed that, while the issue will be examined based on the provisions of Greek and international law, and the procedures provided for under international law will be complied with, it will be borne very seriously in mind that the arrested parties stand accused in their country of violating constitutional legality and attempting to overthrow democracy, the ANA-MPA wrote

"Regarding the helicopter passengers, the Greek government will follow the relevant procedures according to the International Law," Government spokeswoman Olga Gerovassili said in a statement on Saturda y

"However", she added , "the fact that in Turkey the suspects are facing charges for violating the constitutional legality and attempt to dismantle the democracy will be taken under very serious consideration."

When the helicopter landed in Greece, the Turkish Militants  have "dismantled" their grades of their uniforms, so as to not let being obvious their rank on the Turkish army, as greek2m Newsblog earlier story had reported