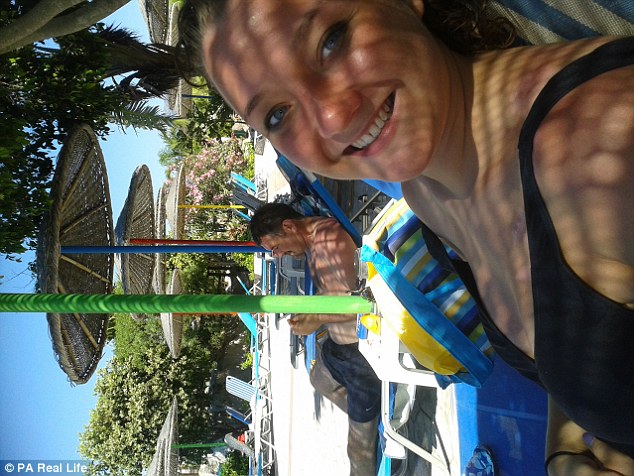 A young woman has been left bedbound and wanting her life to end after developing a severe infection from gorging on cheese on holiday.

Sam Philpott, 22, went away with her parents to Kos, Greece, three years ago. Just weeks after returning home she had started to suffer from migraines, vomiting and intense pain all over her body. And within weeks her condition worsened and she lost the ability to walk - becoming reliant on a wheelchair

She has been left with a list of extreme flu-like symptoms, as well as memory loss, insomnia and speech loss.

She firmly believes it was the gorging on cheese which has caused her all this pain and taken her life away from her.

Miss Philpott, who ate cheese on her pizzas, sandwiches and in her salads, said: 'Who knew with  that delicious unpasteurised cheese....... I was ingesting the bacteria that has led to my being bedridden.

'The bacteria has not only taken my ability to live a normal functioning life, but my bubbly spirit.'

Doctors believe brucellosis entered her system after the former nursery worker from Walsall enjoyed numerous servings on unpasteurised goats' cheese on holiday, pictured before infection at her brother Joes, 24, wedding

Brucellosis, virtually wiped out in the UK, the daily mail wrote , originates from animals and can cause long-lasting flu-like symptoms.

She is also being given medication for Lyme disease as well as brucellosis, as her symptoms fit both diseases.

But now her immune system has shut down and it is not known how she will respond to the treatment.

Her brother, Joe, 24, said: 'At the clinic, they have said she is one of the worst patients they have seen, in terms of how far her illness has progressed.

Doctors believe that she more than likely contracted brucellosis the summer she was in Kos - so they think it is linked to eating cheese.'

Brucellosis is still a problem globally, and occurs in countries such as Greece, Spain and Italy according to the NHS,UK.

It is the most common bacterial infection spread from animals to humans worldwide.

Brucellosis doesn’t always cause symptoms, and the infection may persist for several months without someone knowing they have it.

Humans usually become infected with brucellosis by consuming unpasteurised milk or milk products from infected animals, or very rarely, by eating raw meat from these animals.

However they can pick it up by inhaling dust or through direct contact with infected animals or surfaces.

Person-to-person spread is very rare, although there have been cases of transmission from mother to baby through breastfeeding, and through sexual contact.

Brucellosis is rarely fatal in humans, although some cases can lead to life-threatening complications such as endocarditis and meningitis – particularly if left untreated.

But it is not the first time she has been taken ill following a brush with nature - and her family believe the two incidents could be connected.

Miss Philpott was diagnosed with fibromyalgia - a long-term condition that causes pain and stiffness all over the body - after seeing a specialist.

In late 2010, while walking in California - where she was studying at the time - she was bitten on the bicep of her right arm and on her left leg by a tick.

The bites looked bruised, swelling up and turning black.

'The pain - in varying parts of her body - became so bad, she would be on the bed rocking, unable to make herself comfortable.