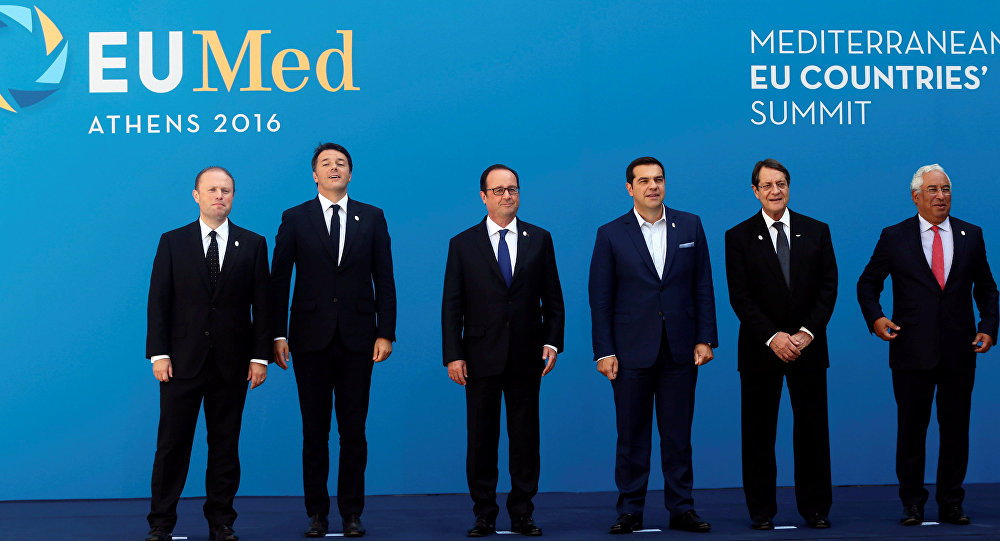 Southern EU leaders met on Friday in the Greek capital, Athens, on the EU-Med Summit, first ever held, and aimed at tackling serious EU problems regarding migration, extremism and austerity,

The first European Mediterranenan meeting by the Southern Europan countries' leaders' participation has been labeled by some factions  “Club Med.”

The Summit, first in its history , came ahead of a showdown with hardliners at the EU leaders summit in Bratislava on September 16.

The Athens Declaration that was signed by the EU Med leaders of the South, was focused on three topics:

But there as also openly expressed  by the Southerneaders the political version of  a more "social Europe".

the Soft power of Europe

During the Press Confernce after the meeting , Italian Prime Minister Matteo Renzi, reminded that the EU Southern countries are called by the USA the "Soft power fo Europe" and  stressed that the future Europe must be a social Europe, a Europe of ideals, and that the Athens Declaration was an added value toward a "different Europe".

Maltese Prime Minister Joseph Muscat said the summit had arrived at solutions on how to move forward, and added that

"The idea of 'social Europe' was forgotten for a long period of time and we say that we will support the development of the Union toward the return of this idea,"

Soon after the meeting the Sputnik News wrote that 'Club Med' Mini-Summit Exposes North-South Divide in Europe", which the leaders made clear that it is Not the purpose of the summit by any means .

Asked to comment the initiative and the conclusions of the European Med meeting  German Finance Minister Wolfgang Schaeuble found that ... foolish. Or, Non intellgent, at least,

“When socialist party leaders meet, nothing terribly intelligent comes out of it most of the time,” he told a press gathering.

“Alexis Tsipras is once again playing the little games he knows so well,” said Weber regarding the summit called in Athens. “What Europe needs right now is a message of unity, not new efforts to divide it.”

A day before the summit attended by a total of seven EU Mediterranean states, Tsipras had also referred to the German leadership in his interview to the French  Le Monde.

“We must collectively agree if we are a European Union or a German Union,” he said.

The Borders and Defense Agreement

"Europe is at a crucial crossroad, it must once again inspire its peoples," Tsipras said introducing the EU leaders on Friday, to the international joint press conference.

"We must take measures that would contribute to a sense of security for citizens, by upgrading foreign policy and our security policy through active initiatives to defend peace and security in our turbulent region..."

And  indeed in the declaration it is signed that

the European Union should:

- Ensure the protection of its external borders, through systematic controls, necessary technologies, the interconnection of relevant databases and the effective establishment of the European Border and Coast Guard before the end of the year;

- Decisively strengthen cooperation in the fight against terrorism, by providing the necessary tools, especially in the fields of police and justice, as well as developing cooperation to address the phenomenon of radicalization, including through promoting a concrete initiative to enable investment in the regeneration, planning and adequate policies for the peripheries of European urban cities. Intelligence sharing should be enhanced, notably by creating a dedicated platform for real time and multilateral exchange.

- Develop European military capacities and the defence industry with a view to reach strategic autonomy, notably through a European research program and a fund for security and defence...

Citing a statement by French President Francois Hollande, Tsipras said that the future of Europe was currently largely being decided in the Mediterranean.