A war of Propaganda , by epicenter Greece A Greek activist, economist Yannis Siatras, head of the political movement “Greek Taxpayers” accuses Mr. Martin Schulz, President of the European Parliament for his attempt to intimidate and blackmail Greek voters ahead of last Sunday's referendum, and threatens to sue him in Greek courts, if he does not apologize to the Greek people within the next days.

Mr. Siatras notes that Greece is a sovereign country with a strong democratic tradition, a proud people, and a rich history of thousands of years. However in recent history, the country has often suffered from foreign interference in domestic matters. These interventions always serve the interests of foreign governments and had disastrous results for the country and the people. 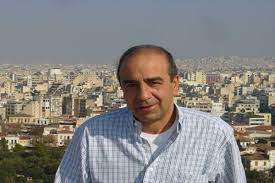 This the official Press Release on Yiannis Siatras FB page

A live interview given by the President of the European Parliament to a German Radio Station, that was also broadcasted in Greece on the Greek referendum day, Sunday July 5th, 2015, straightly attempted to intimidate and blackmail the Greek voters.

The iterview was broadcasted after the 00.00 hrs of Sunday, July 5th, on the same day that the Greek referendum was taking place, during the hours on which the Greek law prohibits any political statements concerning a referendum, or statements made by authoritarian officials for the referendum, or other persons, attemting to affect the voters' opinion hours before, or on the same hours of the voting proceedure.

Due the above legal violations, the economist John Siatras, president of the Citizens Movement "Taxpayers Greeks", asks the President of the European Parliament Mr. Schultz for an apology for his unfortunate intervention, warning that legal proceedings should follow, if the regret for this intervention would not be expressed within seven days after the notification of an extrajudicial document that was filed at the office of European Parliament in Athens on Tuesday, July 7th, 2015.

More specifiaclly, by the extrajudicial complaint that was lodged yesterday to the offices of the European Parliament in Athens, Mr. Siatras reports that

at the morning of Sunday, July 5, on a time that, according to the Greek law any publication or broadcasting of any message or statement of electioneering content was prohibited , the Deutshlandfunk German radio station aired an interview where Mr. Schultz said that "if the Greeks vote NO, then they need to adopt a new currency, since the euro would not be available as a means of payment" and that "once a country adopts a new currency, automatically the country exits the eurozone. These are the elements that make me hope that today Greeks will vote NO", Mr. Schultz said on air.

This interview, was broadcasted by Alpha FM Radio Station in Greece, and immediately after that by almost all the Greek media.

Mr. Siatras accuses Mr. Schultz that the wording he used has straightly interfered to the country's politics and governance, by rushing to anticipate, completely arbitrarily, the results that would be brought by a referendum, which, by the way, concerned a completely different question, than the one Mr Schutz insisted it concerned, the YES or NO to Euro, as Mr. Schult definitely claimed.

The remark offended the democratic morale of the Greek people inasmuch it attempted to mislead the Greek voters and alter their electoral morale.

In this way, Mr. Schultz violated the election laws (Article 48 of Presidential Decree 26/2012) and the Article 181 of the Penal Code, which provide for the punishment of anyone who may "spread in any way false news or rumors likely to cause concerns or fear among citizens or disturb public faith or to diminish public confidence in the national currency or the armed forces of the country or bring disturbance on the international relations of the country. "

By the extrajudicial invitation, Mr. Siatras asks the President of European Parliament, within one week of notification of the legal document, to make a declaration to the German radio station Deutshlandfunk, and also to the Greek radio station Alpha 989 FM which broadcasted on air on the Greek FM Mr.Schultz's interview on Sunday morning July 5th in Greece, the day of referendum. He asks also Martin Schultz by an open letter addressed to the Greek Parliament, to address to the Greek voters as to explicitly express his regret for this unfortunate intervention concerning the Greek voters' choice, and for the infringement of fundamental operating principles of Greek democracy and of the electoral process. Also, Mr. Schultz is legally asked by the extrajudicial invitation to refrain in the future from such or similar actions.

Otherwise, the extrajudicial document warns that a lawsuit has to be filled to the Pesident of the European Parliament against the Greek justice. Interesting is also , that Mr. Schultz, had also given an interview to the Sunday newspaper of the German Welt am Sontag newspaper which was “scheduled” to be publicized on the Sunday 05/07 Greek referendum day , which made headlines in Greece and worldwide through the international press. On this interview Martin Schultz, once again, he had described the day after a NO referendum result by the same “terror- lustful” concept for Greece.

"Without new money, salaries won't be paid, the health system will stop functioning, the power network and public transport will break down, and they won't be able to import vital goods because nobody can pay," he said.

the elected Syriza government to be replaced by "technocrat" rule until stability is restored. , the Telegraph wrote

Yanis Varoufakis, being still the Greek finance minister, had accussed  in the previous the referendum week , the eurozone leaders of trying to terrify Greek voters into submission.

He said his country is on "war-footing"

"What they're doing with Greece has a name: terrorism. Why have they forced us to close the banks? To frighten people. It's about spreading terror," he told El Mundo.

By the way, two days before the Greek Referendum, on Friday July 3rd, the NYT revealed what happened behind closed doors on the last eurosummit in Brussels.

The truth about the Agreement-NOT-to-be-Possible development of Greece's and its Creditors' back and forth- thought to be- honest negotiations, is indeed, shocking, and does not leave much of breathing space for hope for one who would attend through that Greece's next day.

Nothing through that narration reminds of a relationship of a country and its Union, especially of a Union , based since milleniums on this country's ruins ....

Apart from the lenders' side obvious Absence of intention for a solution, as it is described by the NYT article, Mr. Scauble was heard to say by risisng his voice," the ONLY SOLUTION IS CAPITAL CONTROL."..

( find that, on  #Greferenum after: #Merkel spoke of solidarity, is this a joke? (Was it Mr. Schauble who had asked for banks closure?) this is was NYT revealed

And so it happened. Announced hours after

It was the continuosly repeated again and again pictures of Greeks lining up at the ATMs due to the closure of the banks that was dominating  the tv screens, every day and night, spreading unstoppably  fear, panic and agony, even to the least remained, most optimistic that could be , or (DARING TO BE ) smiling Greeks.

Apart of anyhting else, spreading panic in a society in crisis, is like raping society itself, by the Prinples of Communicting in Crisis for a society in Crisis.

"It that was a true violation, a true rape of our society, as never before has happened on the governments' mandated media system in the country that is manipulating political morale throughout two decades"

The interior launched escalating brain wash for the purpose of misleading the Greek voting morale, and of manipulating the public opinion for the referendum reached the highest peaks, the week before the referendum, armed by the power of almost the whole of the big media , tvs, radios and newspapers in Greece, and by the unstoppable support of a YES by the most provided journalists, who are accused , by the law, now, for having crossed the lines of deontology of journalism .

The public prosecutor, the government media watchdog and the Journalists' Union of Athens Daily Paper (ESIEA) have all launched investigations into the reporting on privately-owned media channels in the lead-up to Sunday's historic vote.

It is alleged the reporters breached electoral law by not allowing fair and equal time to all sides of the debate.

The public prosecutor said it was responding to "viewer complaints".

Nine of the country's most visible anchors and news directors have been called to answer to the ethics board of ESIEA - they are Olga Tremi, John Pretenteris, Maria Sarafoglou and Manolis Kapsis from Mega Channel, Stamatis Malelis, Nick Konitopoulos, Aris Portosalte and Dimitris Oikonomou from SKAI and Maria Houkli​ from ANT1.

Actually , they are all, the well established and appreciated to be "opinion leaders" in Greece, since harsh corruption hit the Greek society, (let's say around the years before the Olympic games in Greece-2004), and favored as top journalists by the same systems and governments- for 15 years now- who introduced corruption in this country and applied later the memorandums...) 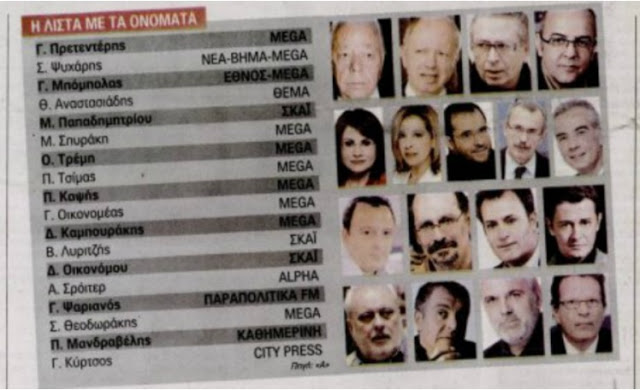 The Journalists' Union of Athens Daily Papers said it had "called on our nine members to address the accusations" before its ethics board.

"Unfortunately, some colleagues mainly in television media, instead of following the imposed strict ethical rules, diverted to delinquent behaviour, substituting the journalistic function with undisguised propaganda."

A spokesman of the media watchdog Greek National Council for Radio and Television said the council would also be launching "an investigation into the way these channels reported the referendum". He said the CEOs of the channel would likely have to account for their journalism.

It was reported in Greek media on Monday , July 6th, that the Parliament may also consider sanctions against the channels. 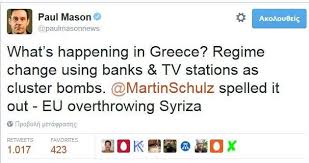 EU leaders: let us tell you, Greeks What the YES or NO simply means....

And sure it was not only Mr.Schultz,  who condemned the Greek people’s right to vote on referendum  for a YES-or a NO, to  the measures proposed by the last offer of Greece’s creditors , as the Greek governmenet had set the referendum question.

By escalating the pressure, and insisting on it, the EU leaders decided themselves what the referendum question was about, a yes or no to euro, they  and that’s it , and straightly addressed their blackmail to the Greek voters, as if the Greek government did not at all exist

Of course Greeks did not obey as a mass, definitely not as the European Union leaders would have predicted to respond on this stage of blackmailing  Greek Xperiment.  Surprisingly, to most of our euroleaders that were , probably , sure that the threat of some cash, is able to conquer the Greek mind

Carrying in their genes the original means, and principles of Democracy, since it ever existed, and trusting and dreaming of a united Europe, also, since EU started, Greeks now, stand and watch completely puzzled what it seems be unveiled as another Union named Europe of Yes or No Greeks .

The horizons of Greek spirit and soul remain since ever unpredictably free, unpredictably resistant also remains the Greek fighter's' mind  when the duty for the country rises...