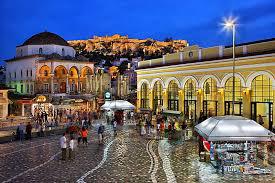 “We have found the ideal spot in the heart of Athens and look forward to once again introduce our guests to American food and rock n’ roll atmosphere, while paying close attention to the Greek culture and dynamic Greek music scene.” said David Pellow, Area Vice President – Europe at Hard Rock International, during a media event in Athens.

The new and authentic Hard Rock Cafe will be located in the Monastiraki district in the historical center of Athens, in very close distance to the Acropolis.

The Hard Rock brand existed previously in Athens through franchise for some nine years (2004-2013).

The 200-seat Hard Rock Cafe Athens is poised to be one of the city’s premier dining and entertainment destinations for residents and visitors to the Greek capital, with a facility encompassing some 900-square-meters of space.

The Rock Shop is scheduled to open in April while the bar will begin operating during the summer and the restaurant will open its doors in November. The cafe/restaurant is expected to provide 80 new jobs.

Mr. Pellow also said that Hard Rock International is constantly in search of opportunities for new investments and he left open the possibility of opening another Hard Rock Cafe in Greece in the future.

Beginning with an Eric Clapton guitar, Hard Rock owns the world’s greatest collection of music memorabilia, which is displayed at its locations around the globe.

Hard Rock International has a total of 169 venues in 51 countries, including 133 cafes and 15 Hotels/Casinos.

Categories: Greek to You in Greece