This is the #BorderNoControl on the Aegean Gate to the West 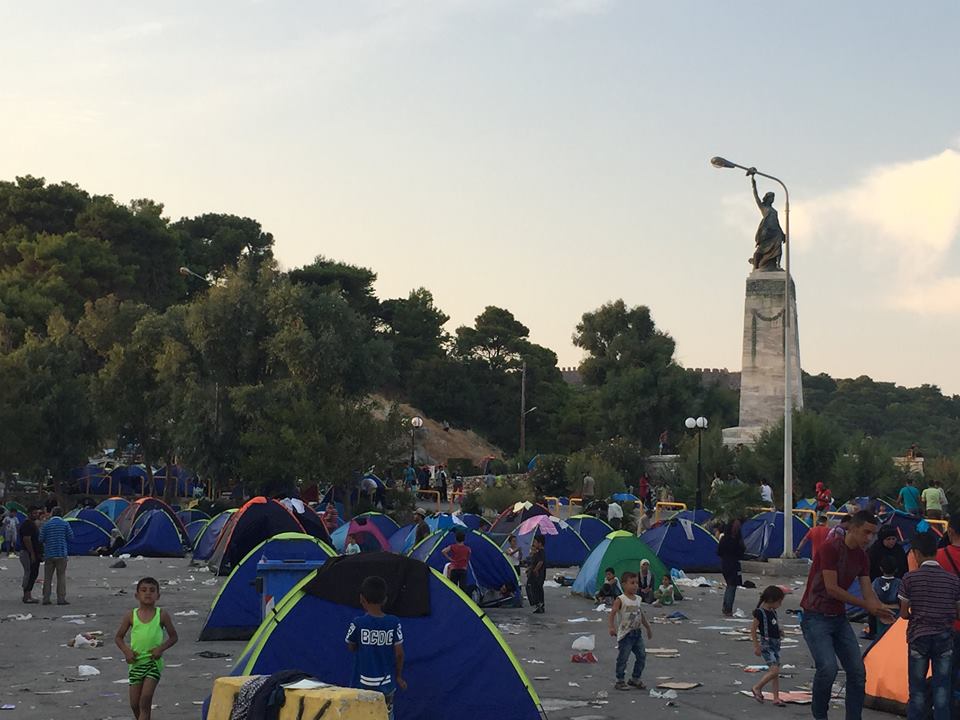 For a piece of paper only

Migrants are not screened on Europe’s Borders by fingerprint, Passport , Passport ID number photo, or even…..face control to enter the Aegean Gate to the West.

All of them, migrants and refugees are considered to be kind of the same.

Syrian Refugees, who most of them, left their bombarded life and country WITH their Passport on hand, are checked , and actually NOT checked, the same exactly way as undocumented migrants, terrorist suspects, and all the other migrants that enter Greece, arriving here from any corner of the Eastern, Southeast or other place of the ruined Arab Spring world.

Iraqis, Iranians, Afghanis, Pakistanis, Kurdish, Somaliands, Lebanese, and even ISIS people who , yes, indeed, have been found among the Migrant’s influx’s masses, that enter daily through the Aegean, Greece’s and Europe’s Door, surpassed the number of 55000 people on the island of Lesbos, and its capital Mytilene, (which counts 23000 local residents) ,on the period between the mid August and the 10th of September , that happens to be the peak of its touristic season of the whole year .Most of them declared to be Syrians on a real #BordersNoControl procedure that aimed not to crosscheck them at all, since not even a single photo has been required for the ID document paper the Paper-of-Hope for a new life, provided to them after they are finally checked on Greece’s Aegean islands, which allows them to cross Europe’s Gate and travel further to the heart of Europe from here on.

All these migrants and refugees had been left by the Greek authorities rambling around the isle unattended, and basically unchecked, undocumented most of them, and uncontrolled, since No Emergency or Safety Response Preparedness had ever been initiated for such migrant’s influx scenario, and especially, for the scenario of such “invasion” as it happened on the island by the migrants’and refugees’ overloading population , that lead to a nightmarish reality which citizens and tourists experienced on Lesbos for about 20 days, as no other country of the West would have even imagined …

But was it real, this overloading of newcomers, in clean numbers, or had the absence of any management, or control, multiplied the picture of this drama on a version of a replicated tragedy consisting of replicated errors and leading to replicated threats?

Unfortunately, the second seems to be the truth, and responsibilities for letting this happen concern the safety and survival of the whole global village. This is why :

1. Identification Procedure for the providence of documented papers made impossible.

During the peak period of the migrants’ influx on Lesbos , there had been scheduled only two checkpoints in the city of Mytiline to provide the refugees/migrants papers that would allow them to further continue their trip4Hope to Europe. A rare number of Coast guard officers were charged for the checking identification procedure, so as to identify at least 3000 to 4000 of migrants each one daily, which was simply impossible, while working, by the way, only one shift daily, usually from morning to afternoon. 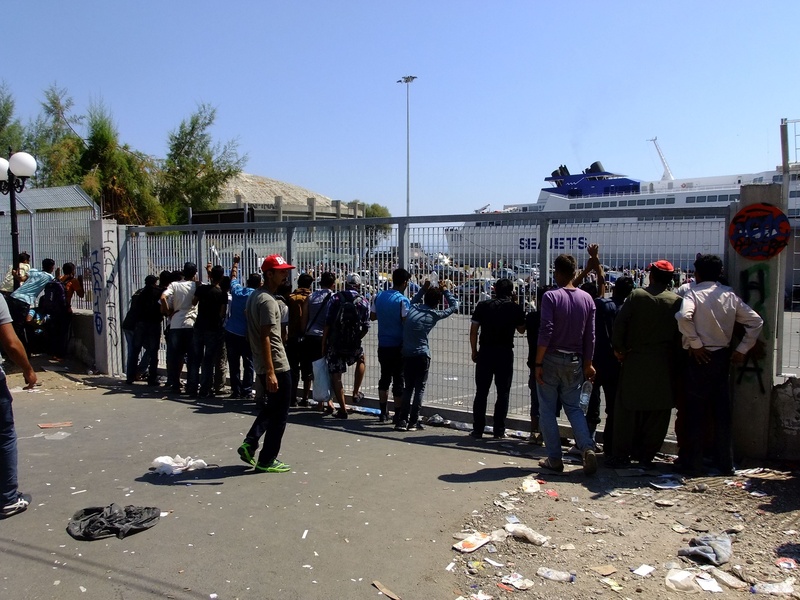 These checkpoints were one on the port of Mytilene where entrance to was not allowed, but exit from, was(!). To unidentified refugees and still undocumented ones, EXIT without having been checked and received the papers, to let them ramble around and do whatever they wanted , was openly free. But guards were strictly keeping the Gate to Port Checking Point Close, and guarding it, even by hitting migrants that wanted to enter, because the queues were so long, they said. For the rest of unidentified migrants ( thousands of them) that stepped on the island and had not yet found a place on the queues for their papers, there were only three things not allowed to them: Enter a taxi, enter the ships, and a hotel. But everything else was free. They were free to go camp wherever in the city, even in front of the city’s Army restaurant on Kioski, and the city’s Archaeological museum. They we free to shop, to go swimming, they were free to dine, except some very few places, they were free to pie on open air, and use the city streets as toilets. Of course they were free to spend all their money, and were welcomed for that. And since their identification on checkpoints was taking more than one week for each, many of them found themselves having spent every euro they had before leaving the island to Europe

Ships from Lesbos island to Athens for the decongestion of the number of the migrants and refugees as soon as they would have been provided their papers, on those heavily overloaded days from mid August to the 10th of September, could not transfer more than 1000 of them on the max, daily, a number shorter than the number of the newcomers, and sometimes half, or one third of it. New arrivals kept rising on peak of newcomers’ numbers, for two reasons which should by the authorities have been assessed and forecasted

a . Migrants and refugees that arrived on Aegean isles were in the rush to get into Europe as soon as possible and arrive to Central Europe as early as possible , before the wall in Hungary was constructed and the measures for migrants’ entrance to European countries such a s Skopje borders would have been made more difficult.

b . the weather was helping the trips through the Aegean waters on the boats, since the sea waters were calm at most in comparison to weather and wind conditions throughout the whole July and June of this year ,when it was either rainy and windy or incredibly hot. Simple weather forecast should have been assessed linked to the already appeared , since the mid of July, escalation of the migrants’ influx on the islands.It was definitely probable, that the problem would augment 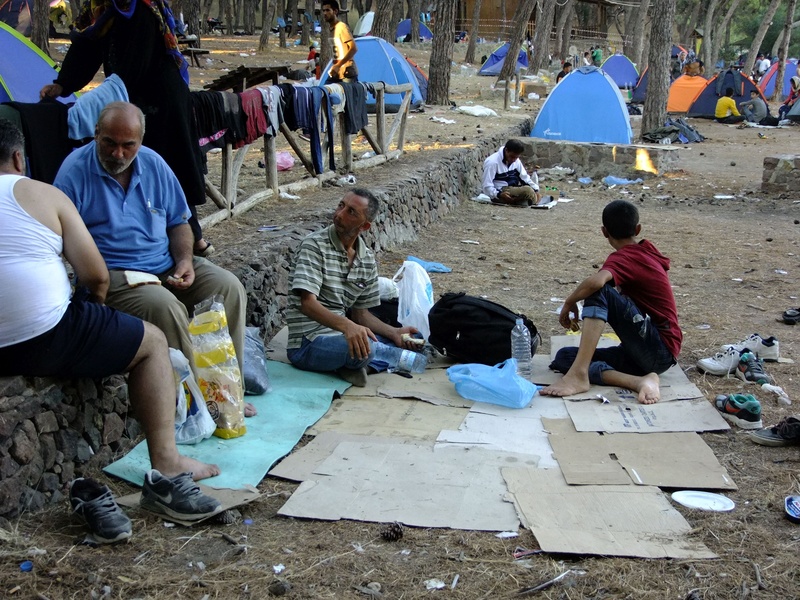 3. No chemical toilets, no soap, no water for basic hygiene

No chemical toilets, no water AT ALL to wash hands during the night -and every night, no public water for the migrants to wash their hands during day and night, and also, public cleaning crews, even though they are officially obliged to protect the local population and the Public Health village seemed not to not exist at all, due to lack of financial resources.

In less than a month, situation worsened so rapidly, that the isle's residents woke up on a huge urine &feces open air camp, their city. A Public Health Emergency that seemed out of Control and out of Response....

Worth noting the fact that, at least, polio virus spreads through the feces , in conjuction to the fact that Syrian population is unvaccinated to Polio. And this was not the only factor predisposing the islands’ Pubic Health to communicable diseases. Pakistanis populations that arrived among others, the resource of reappearance of malaria since 2011 in Peloponnese, were camping, due to all this delay of documentation Paper checking, throughout the city and close to

There had not been announced a single Health Hygiene Protection Guideline by the authorities, as if No probem actually did exist. 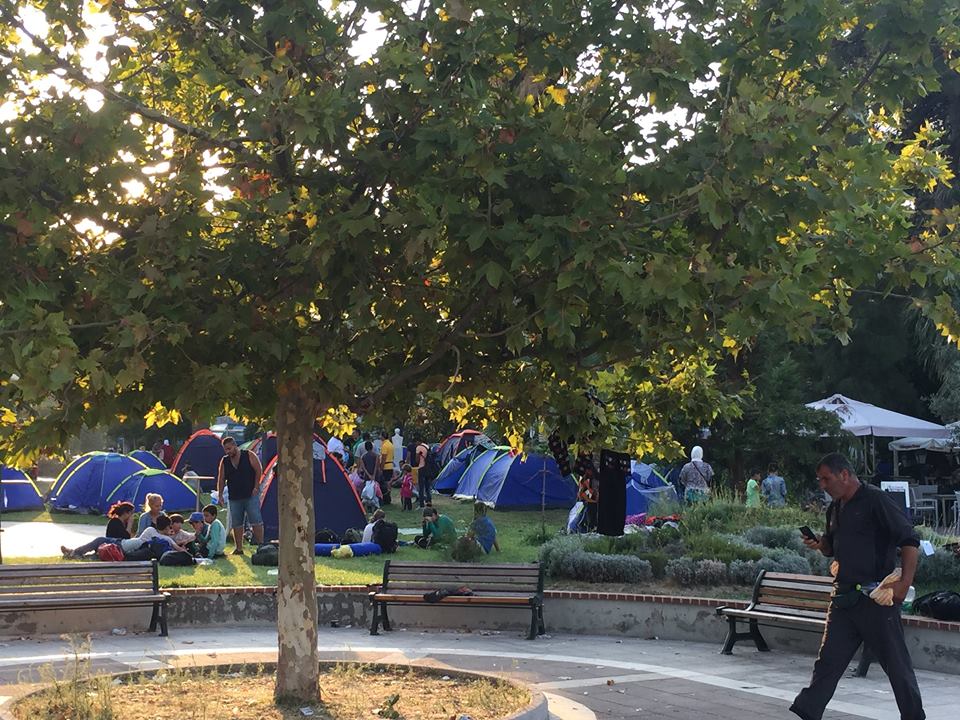 (Exclusive by Greek to me !)

4. ISIS between us, YES true

No one is checked, anyway, why not?

Exclusive information to Greek to me, talked of at least four ISIS suspects in the city of Mytilene during the last four days. One of them is referred to have been driving a car, playing ISIS music around the tents of the Syrian refugees, identified by the Syrian due to the symbolism of wolds, and special music tune “related to ISIS Propaganda songs”

The other three have been arrested on Friday by the Police, after being recognized by citizens, while they were walking around the waterfront of Mytilene city. The symbols of their blouzes have been recognized by local citizens, and Police was informed. They were arrested by the assistance of National Intelligece Agency . They are being interrogated 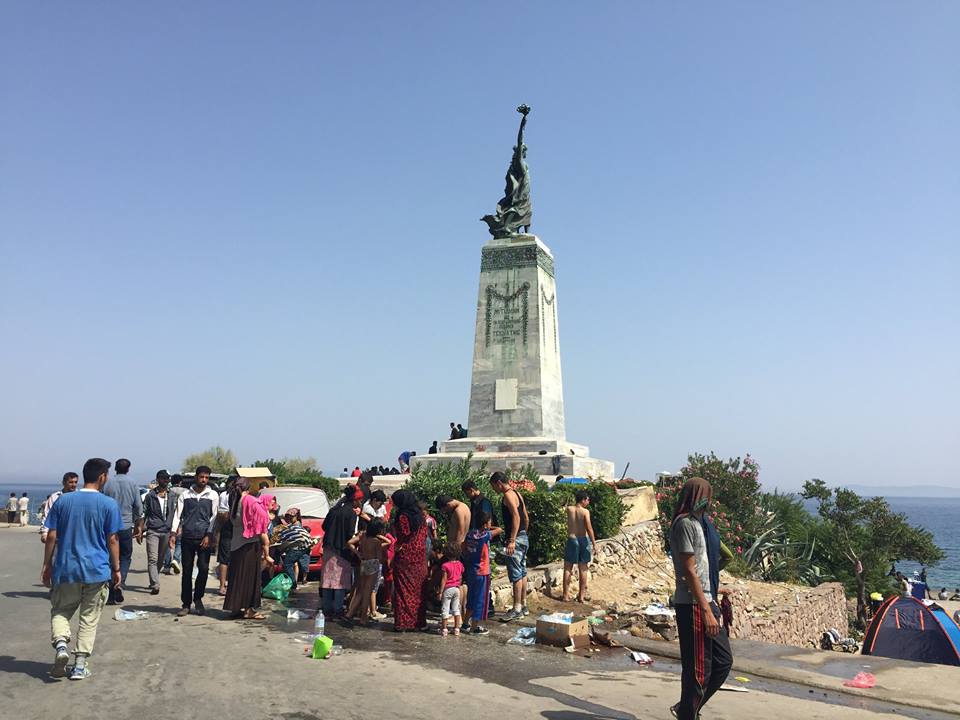 the statue of Liberty on Mytilene Port , similar, almost identical, to the one of New York, donated in 1930 to Lesbos island by Greek refugees of Lesvos and  Ismir who moved to the United States through Lesvos after the massacre fo Izmir, today, the meeting point for the many thousands of the new refugees arrivals to the island...

For more on the #RefugeesCrisis update on the Aegean islands and Lesvos, visit our #GreeceTransit4Hope updated Home Page 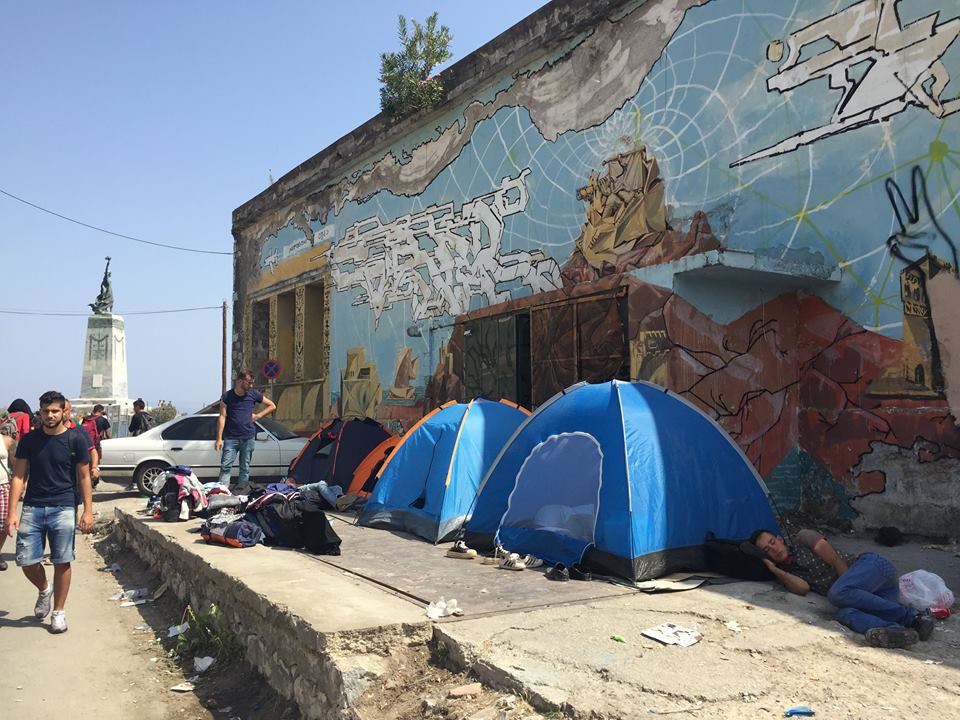