Migrants in Greece have to be screened for Ebola as soon they are arrested. Could this be true? 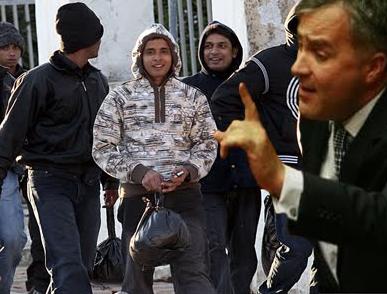 The number of the 31.000 illicit immigrants will surpass the new arrivals in Greece up to the end of 2014,mentioned the Greek Health Minister, Makis Voridis, at the Ministerial Conference on "Health in the Mediterranean", held in Rome,at the end of October 2014, highlighting the need for further cooperation and solidarity among the member states of the EU and the promotion of cooperation .

Makis Voridis made clear that the primary focus of the Mediterannean countries' cooperation for the the EU borders' safety is the Capacity building for the appropriate Emergency Response to contagious epidemics and especialy. Ebola- on this very moment.

Irregular migrants in Greece is expected by the end of the year to exceed the 31,000 people he said, stressing in particular the issue of the urgent need of coverage of health coverage, material needs, facilities and ecquipment, but also the burden of the Greek health system, in terms of infrastructure and resources,made particularly severe in times of crisis and economic constraints.

The Mediterranean Health ministers referred to the International Health Regulations, mentioning the importance of its implementation, highlighting particularly the current Assessment of Preparedeness Response to tackle epidemics, which are of particular importance in the reaction and protection against Ebola virus epidemic.

Since the end of the summer, lots of  political  denouncementshave come to light , concernng the uncontrollabe situation on the islands, where immigrants enter the EU bordres through the Aegean , but many of them remain unrested , and God knows , how many of them, remain unchecked Go to the previous stories of Greek to me to for the background of this story details

The illicit immigrants should be screened for Ebola infections as soon as they are arrested, according to the Greek Minister’s of Health statement on the Radio early Monday, October 13

But are all the illicit immigrants, who enter Greece, arrested, and what does the new political decision of the Ministry of Health mean for the procedures of the whole Greek state, the police, the coastguard, and also for the common people, locals and visitors, who find themselves walking, and even traveling, among immigrants all around the country?

Still, on the East borders of Greece, the Aegean islands, you can see dozens of illicit immigrants living on open space, around the main Lesvos island port, for example, as does happen since summer, an unexplainable scary situation, which the Maire of the island denounced again last week with a furious letter to three ministers in charge.

Since May, also, dozens of illicit immigrants travel among common travelers and tourists by the Aegean ferry boats to Athens

The Minister of Health, Makis Voridis, explained today live on the radio, that in case an immigrant, or illicit immigrant, is found positive for Ebola, all his contacts and relatives have to be screened for the virus, and may be quarantined.

For some local communities, as are the Aegean islands, the first question that any local resident or authority would ask is, if the illicit immigrants that one can easily meet in the community were previously arrested, or kept at the detainee centers,- and the second question is, can we suppose that, whoever illict immigrant interacts in the community among legal immigrants and local residents, is screened for infectious diseases and for which ones.

No official answer on these very tiny and very hot issues is given by governmental or local authorities.

On a broad Emergency meeting of the Greek Ministry of Health, last week, with all the stakeholders involved in the Prevention and Response of Ebola epidemic, the Greek CDC (HCDCP/KEELPNO), and the Emergency Operation Center, it was decided that preventive measures for Ebola virus should be intensified, and that, in general, extra special caution should be given on the awareness of people who come in contact with the immigrants, NGO workers, illicit immigrants’ populations, and immigrant groups.

The Minister of Health emphasized also, that Greece is the first of the European countries, that intensified screening on the Entrance Gates of the country, by checking for Ebola infection also the transit passengers from “suspicious” for Ebola infection countries. This measure, the Greek Minister of Health explained, is decided due to Greece’s special geophysical point on the Crossroad of East and West, North and South, and also due to the sensitivity of Greece’s Public Health infrastructure for the moment , that is affected by the devastating austerity cuts on Public Health budgets.

The Entrance Gates of Greece at the airports and ports will be recruited by additional health personnel, fully updated on Ebola Emergency Response by the Greek Center for Disease Control, while Travelers arriving in Greece from Ebola hit countries, or countries “suspicious” for potential Ebola transmission, will be asked to fill a “contact history” questionnaire on their arrival, as to be first screened for potential Ebola infection before their arrival.

According to their contact and travel history, travelers will be allowed to enter Greece, or will be further medically screened for Ebola virus, and in case of infection, will be quarantined.

So far , three cases suspicious for Ebola infection in Greece, have been proved positive on malaria and not Ebola, the Greek CDC ( HCDCP/ KEELPNO) has announced.