International travelers, you may be travel with migrants in the ship, to and from the Aegean islands . Government has not anounced it at all

Refugees and migrants who entered Greece recently, from origin countries such as Syria, Iran or Afganistan, are guided by the Greek authorities to travel from the North Aegean islands to Pireus among common passengers, tourists and visitors, on the daily ship lines that come and go to and from the islands carrying routinely thousands of Greek and foreign travelers.

It is a phenomenon that entered the boat travel world in Greece, silently, though obviously. " This started some days before the May elections,this year,  comment , anonymolusly , people from the ships personnel and the Coast guard, witnessing the phenomenon 24/7, on daily basis' passengers exchanges between the islands and Piraus.

In case that the common traveler has not bought  a cabin ticket, as hundreds of Greek and foreingers do, he stays right in the same lounges by the migrants . "How are they authorized to travel?" Greek2m asked on board from Lesvos to Peiraus, recently.  "They carry a certificate- paper", said both people of the personnel of the boat and the Coast guard,"  that orders them to leave the ilsand ( of Lesvos, mostly, where the detainee campus is), to travel to Athens, and stay  "somewhere around the Omonoia square" .

This unexplainable , and Error Alerting political practice, sets in danger any single passenger traveling on board by the greek ship- lines today, the families, the local communities, and also the Global Health Village, Traveler's Health and the Global Public Health, as a whole. 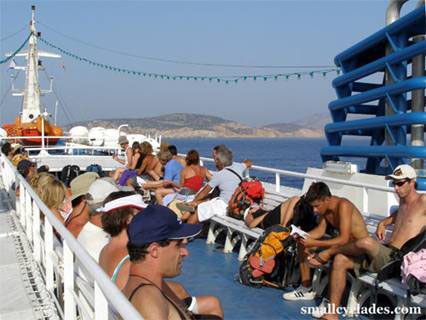 The migrant populations that are detained at the migrant campuses on the Aegean islands, and mostly on Lesvos island , arrive through  the trafficking roads and the Turkish coast under inhuman conditions by small boats that carry them to the islands-( by hundreds of them drowing in the Aegean waters ditch)  and then ,if they manage to survive, most of the times, they are arrested by the Greek Coast guard, and are kept at the detainne centers.

The Greek Centers for Disease Control ( HCDCP) , the Public Health organization for Communicative Diseases in Greece, which is founded for the biological Surveillance in the Aegean and Mediterranean area are since 1992,  has raised in the last decade the  public, international and political awareness in Greece and the world,  for the Biological threats that trafficking brings in the Gate of East and West,  the migrant populations , who threat the Western world by bringing infectious  Diseases, that threat , in consequence, Europe, to re-emerge.,The Greek CDC has managed,despite the unbearabLe conditions, till now, and whenever a new deadly outbreak threartens Europe, to contain epidemics and spot  the Surveillance and Response right on the Gate.

The recent unexpected, unthinkable reality , experienced on the ship lines of North Aegean, has set on Alarm the Greek CDC authorities, but for a country like Greece, it takes at least the best of Emergency Response and the most of pure Luck, to keep the Health Village Safe .

This could  only be a mistake, makes this experience, every traveler think, Greek or foreigner, expert or just teenager, for the blue, lovely, Aegean Frontiers, that bring finally  the East and the West, ... so risky close....!

For more information on these issues, provided to you by the accurate journalistic responsibility of Greek2m, follow all of the above links.

To know more for your 24/7 Protection on board while traveling to Greek islands by ship, go to our Special Page, On Board to Greek Islands

Visit also, the Cruise ship Travelers Page by Greek2m. Legionella Alert for pools, spas and showers by the Greek CDC, and more

For more about Polio, Resistant Tuberculosis and the Emerging Communicative Diseases that are threatening to re-enter the Western World through the trafficking populations in Greece go to our Special Story Greece's own Armagedon is in the air ,