Joint Patrols in Aegean, -by EU blessings-, the trap of Turkey's humanitarian guise

"No official European documents raise the issue of joint sea patrols, but if Greece is asked,the answer will be no "–answered unofficially to the media the Greek Foreign Minsiter Nikos Kotzias , on the scenaria of joint Greek nd Turkish patrols on the Aegean Sea for the EU's external border protection, a scenario that kas been on top of the talks recently in Greece, and was recently reported in the German press ahead of the draft action plan signed last week between the European Union and Turkey on the support of refugees and migration management.

According to the plan, Turkey will “strengthen the interception capacity of the Turkish Coast Guard, notably by upgrading its surveillance equipment, increasing its patrolling activity and search and rescue capacity, and stepping up its cooperation with the Hellenic Coast Guard.”

“In the Aegean Sea, between Greece and Turkey, both NATO members, traffickers do whatever they want,” she told the paper.

Diplomatic circles in Athens confirm that  Ankara is tempted to use the refugee crisis as a tool for to put a feet in Aegean, as greek2m.org article noted among first media that mentioned the issue, based on Paris Karvounopoulos,, the credible, Defense reporter in Greece, who first publihsed on onalert the story. By Paris Karvounpoulos, for the On Alert, translated, October 5, 2015

The agreement promoted by Europeans that provides "joint patrols of Greek and Turkish naval forces in the eastern Aegean", under the "administration" of Frontex, is reasonable to cause further questions. History has shown and proved that Turkey's intentions for the Aegean have never been innocent or naive, and that Turkey has always been searching and looking for ways to promote its positions and views of a "different" Aegean Sea. The issue of research and rescue is the most illustrative example of Ankara's effort to impose a fait accompli in the Aegean.

Turkey has accustomed us to "put forward" human lives to achieve the objective of "sharing" of the Aegean Sea right in the middle!

So it is rather logical this European suggested proposal to raise in Athens suspicions about the Turkey's intentions but also the intentions of the Europeans, and especially the Germans. And it will be of course not easy for Athens to express this suspicion and to avoid the "cooperation" with Turkey.

There is a dimension, once again, that should not be ignored .

The reality we already have to manage, and will face to manage further on. Our Navy and its men, along with the Coast Guard personnel are struggling daily with enormous problems, every single hour, 24/7, to manage the unthinkable. The impact of the crisis and the way in which political leaders have , or have not faced it, so far, ( since more than a decade since the start of the migration phenomenon) concerning the maintenance and the technical support issues both of our Army and Navy, and also of the Coast Guard have caused a nightmarish reality.

On the other hand the "Alert" Turkey has spent huge amounts of "building up" its Navy durringe same period of time, and has significantly upgraded its Coast Guard.

The agreement promoted by Europeans, we have to admit, does only serve them, and the Turks. By this way , the Europeans from their part, avoid once again to participate actually and effectively in managing the problem of the migrnts. On the other hand Turkey, by the European and especially the German "blessings" will succeed on the merits what, exactly is seeking and trying for decades: The Control of large areas of the Aegean. Turkey is now supposed to "save people" which, primarily, definitely, are sent by itself to the sea! The worst part is that any Greek objections and protests for the undouptedly expected Turkish "fouls" will "hide" under the Turkish "humanitarian guise."...

Things will get worse, and we have to awake , our consensus, response and politicians..... 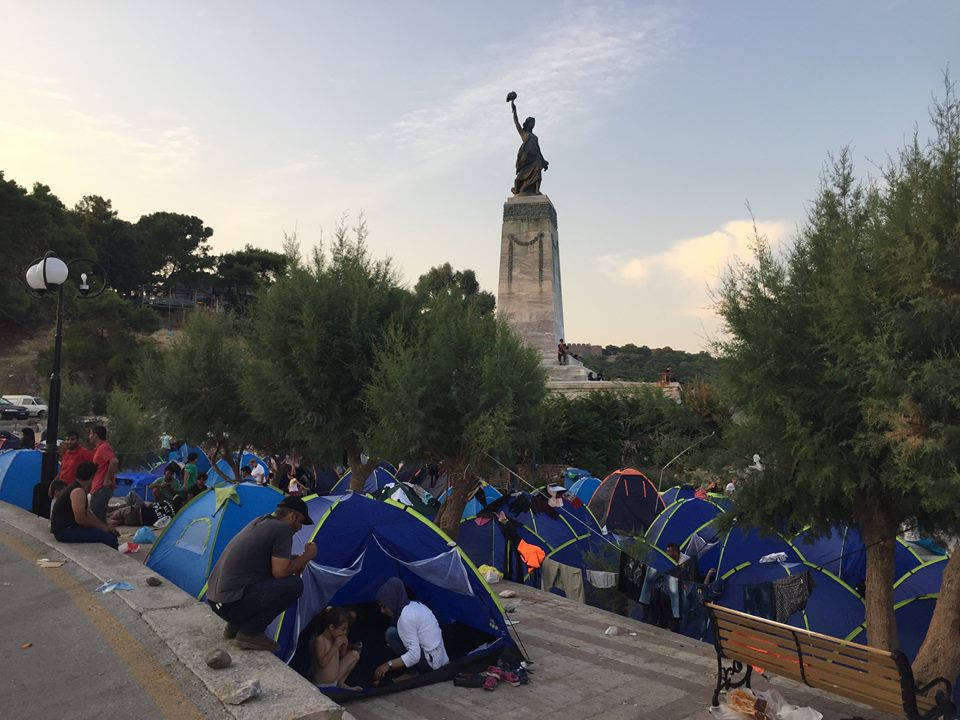 But humanitarianism , and keeping safe the EU borders starts far before  the joint patrols in Aegeanisnists the Mayor of island, Spyros Galinos, who just on time, and much earlier has included the proposal of identification process of the migratns to be done on the Turkish coast, so as to:

a. save the refugees lives without letting them risk their survival on the smuggles flammable boats,

b. keep far safer the registration network since hard measures for the ISIS shld be taken in Turkey, before the sea smugglers' routes

c. let the refugees avoid the immense cost of 2000 euros and more for the sea crossing trip of the two hours, which officialy costs 10 euros or less

In the official Lesbos' municipality's proposal for the Crisis Response -which is sent odfficialy by the Mayor since late August to Jean Claude Juncker but avoided to answer, transposing the responsibility of the proposal's assessment to EU Commisoner Dimitris Avramooulos, the Mayor of the isle Spiros Galinos stresses the importance of such a solution, by emphasising on the hundreds of deaths in the Aegean Sea by the current smugglers' trip practice,  and reports also that previous cntacts with his counterparts in Turkey  have not been negative so far . photo: Alexis Tsipras visiting Lesbos of the visist os island and hosting the Chancellor of Austria, followed by the Local authorities representatives. Spyros Galenos, Lesbos' Mayor,(standing behind the PM),  host of the visit on the island

on the official Lesbos Municipality proposal, which Mayor Spyros Galenos, has also discussed with Prime Minister Alexis Tsipras on his recent trip to Lesbos,this is what  is proposed:(

Installation of one or more Registration stations in Turkey. Provision of first aid, registration and a safe departure issuing a normal price ticket and not an overpriced ticket from the smugglers.

Lesvos Municipality and the Mayor Mr Galenos, have made investigative contacts with Turkish Mayors only to find out that they are very positive in cooperating and acting in common in order to manage the migration issue. They too are experiencing similar problems and wish for an international cooperation among city councils and Mayors