Fishing the terror ! All that happens in Aegean.... 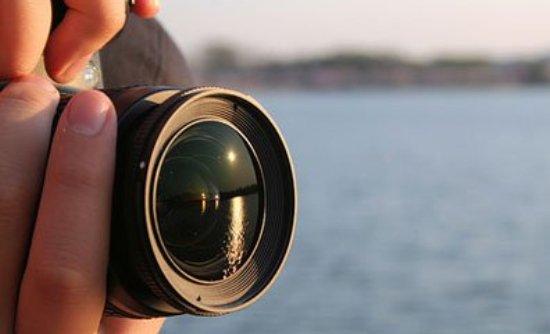 A senior German Spy, a "most wanted" Turkish Terrorist, a boat, migrants, and the Greek islands

"For at least three years, he photographed camps and other infrastructure of the (Greek) armed forces in Chios and was paid to give the material to Turkish nationals" the police said in a statement.. But on Sunday 4th of August on the tv News in Greece, Alpha TV reported that the German man, was already identified by the Local Chios Police exactly one year earlier,, to take photos outside exactly(!) from the same military unit . He was asked by the Police and he had answered that he was simly a tourist

A 72 year old German who lived in Chios for the last four years , was found to be a spy and was arrested Friday 2 of August on Chios island, Greece, by the Hellenic Police during the anti-terrorism investigations that are being held extensively on the Aegean islands Chios and Lesvos, Mytilini in the last week, as well as in Athens, in cooperation, as Greece has stated, with Turkish authorities and the INTERPOL , since last Tuesday when a threatening international terrorists’ network, popped up from the Aegean waters and started to unravel.

The German spy , according to the recent Hellenic Police announcements , was collecting photographs, videos and other material on behalf of Turkish nationals for facilities in Greece, infrastructures and projects of the Hellenic Armed Forces and of other Welfare organizations.

The 72 year German spy was arrested Friday at the area Armolia , Chios by the Hellenic Police and was found to possess two cameras, and multiple storage cards with photos of military camps of Chios. The investigations found that, indeed, he had photographed just the last day, on Thursday morning, a military camp area and also ,at earlier time, the streets around a second military camp at another area of the island.

He alleged to the Police that his photographs were held on behalf of unknown, unidentified Turkish nationals who had approached him during the summer of 2010, and had asked him to deliver by order to them such photographic material, for fee ranging from 500 to 1,500 euros for each mission. The material was then sent either via coded e - mail, which was after sent deleted, or was picked by five – who remained unknown to him as he said-, Turkish nationals, and the material was so delivered to them either in Chios or in Turkey.

Furthermore, the investigation research on the online account (e - mail) of the German spy showed that he had alerted, reported and informed his ( unknown) Turkish connections for the terror boat that was found at the Oinousai area and for the arrests of two Greek and two Turkish nationals that were transporting ordnance .

The mail was sent in the previous week to a unknown recipient, and contained data on Greek warships and military vehicles, located in Chios.

It was just a couple of days after on Chios island , Members of the armed wing of the organization "Revolutionary People's Liberation Party-Front" (DHKP-C), which acts in Turkey, were arrested by the Greek Coast Guard along with their Greek partners on the inflatable cruiser boat that was carrying heavy weapons at the sea area between Chios and Oinouses

The boat. How all this started

On July 30, 2013, at dawn time, a patrol boat the Coast Guard of the Greek coastguard identified and verified in the sea area between Chios and Oinoussai, an inflatable speedboat, approximately 7 meters, with four occupants, two Greeks, 22 and 51 years old and two foreigners, a 55 and a 33 year old

The Routes of weapons

The police investigation revealed that the guns were loaded in Chios on route to Turkey, and the that the two Greeks aboard the inflatable had made and rerouting the same trip , some days earlier , transferring migrants"only", as the Greek Police wanted to assure to the media A Hellenic Police Officer talking officially to the greek press explained that the two Greeks arrested were not known for involvement on terrorist action in Greece, but he emphasized that the organization DHKPC, was considered terrorist not only in Turkey, but in the U.S. and the EU, and he stressed that "Greek authorities have excellent cooperation with all the services that combat international terrorism."

According to the present data, those arrested did transfer weapons in Turkey, where they seem to have planned to disembark , according to some blueprints and maps that were found aboard, but still remains unknown what was the final destination of the weapons and explosives, and also uknown remain the weapons and explosives origins. It is, though, by the Greek authorities certainly excluded that the material is stolen from any military facilities in Greece. It is not, they confirmed .

The investigation Counterterrorism also showed that the inflatable boat carrying arms belongs to a Turkish national who lives in Greece and who is being sought by the Authorities , and also that the vessel had been assigned to 51 year old Greek . Together with the 22 year old, who has graduated from the Merchant Marine Academy and led the inflatable, the 51 year old Greek had gone on July 26 via ferry in Mytilene, where they met the other 50-year old Greek and the 54 year old Turkish national who were also arrested after the discovery of the inflatable , and all together went to Chios, where they met two other Turks who would accompany the armature

The arrests,  such Famous terrorists

As soon as the inflatable boat was identified, the first arrests were the described above six people, three Greeks, 22, 50 and 51 years and three Turkish nationals, 33, 55 and 54 years.

They were also prosecuted for investigations 17 more foreigners, nationals of Turkey, 11 from Athens, three of Thessaloniki and three of Chios, and total of 10 surveys in homes and venues were done by presence of representatives judiciary Authority.

• As the Head officer of the Greek Police confirmed talking to the local media on a press interview,ON BOARD ( among the 4 first ARRESTED) was the Turkish national Hassan Bieber , 55 year old, who is since last March wanted by red tag by the INTERPOL for his terrorist activity in Turkey .The Turkish Minister of Interior Affairs by official statements in Turkey confirmed that Hassan Bieber was identified as the person that inteted to attack last March in the Turkish Ministry of Justice by with grenades.

The investigation Counterterrorism Office, revealed that the 55 year old Hassan Bieber, had submitted by false identity, request for political asylum in Greece, but was rejected .

• Respectively, and the 33 year old Turkish national who aboard on the inflatable boat, had made a request for political asylum, which was rejected as unsupported, since he didn’t appeared at the date of the interview. He was identified in January 2013 in Alexandroupolis and had given protocol deportation pursuant by which he had to be pulled from Greece by the 13 of May

Investigations also in Athens, Thessaloniki, Loutraki and Chios, included and the Offices of the Solidarity Committee for Political Refugees in Tzavela street in Athens.

• By these investigations, another Turkish national was arrested in Athens who is also wanted by European arrest warrant by the German authorities, and was convicted in Germany four years in prison for funding a terrorist organization, He was moving freely in Greece, using a false French passport that was stolen last April from the military attaché of the French Embassy in Greece as the News 24/7 said 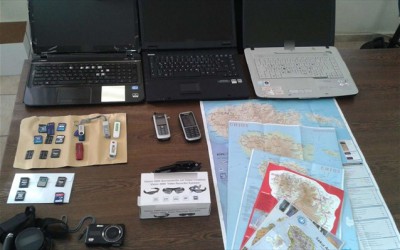 - Number of laptop and tablet computers,

- Number of handwritten notes and books

- A printout of digital map, which depicted coastal region of Turkey, namely the area Karantouroum of Smyrna, and there are some coordinates,

- A sheet of paper, one side of which are embossed color photographs, depicting coastal areas.

Preparedness and elimination of digital records

According to the police statement, when the Counterterrorism men entered in the field of road Tzavela, at Eksarcheia downtown Athens where the Offices of Solidarity for Political Refugees are found , People who were at that time inside the Offices had begun to destroy digital records. All seized evidence will undergo laboratory tests by the Directorate of Criminal Investigation of the Greek Police. 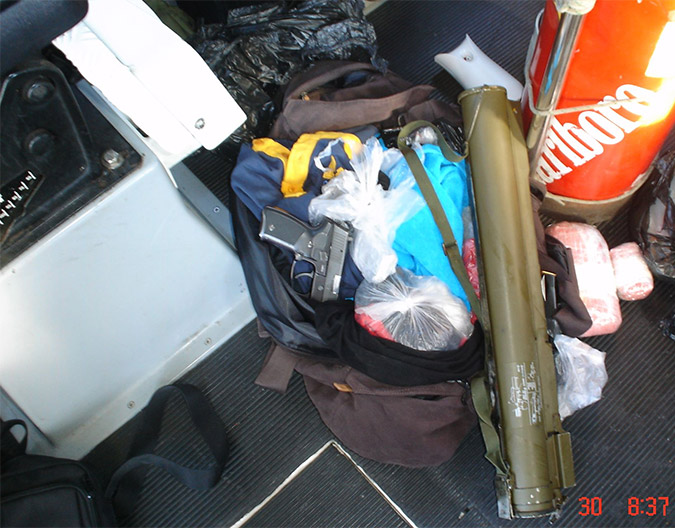 On the backstage : immigrants , trafficking,  souvlaki and delivery

Restaurant owners , souvlaki businesses and delivery boys were found to be the façade of the terrorist group associates and which made them easier to appear, come and go to the islands, as to finally support the transfer of members of the Turkish organization DHKP-C via Chios in the neighboring country ,as the Greek Newspaper online Vima wrote on Sunday (on http://www.tovima.gr/society/article/?aid=524680)

T wo of the primare arrests were restaurant owners in Paleo Faliro and Agios Dimitrios, and others involved were a delivery boy and relatives . Those were the ones who seemed to have organized the movement of the two members of the Turkish organization by the speedboat, according to Vima.

Greek officers of the Hellenic Police expressed their fears of any possible Greek networks of supporters of Turkish armed, a scenario which threatens to cause problems in the Greek Turkish relations.

The Counterterrorism Office raided a souvlaki restaurant at Agios Dimitrios, which was belonging to a person of Turkish origin. He is the one that appears to be the first owner of the identified off Chios inflatable . The one that was arrested as the captain of the speedboat was the 54 year old Greek who was working at eh souvlaki restaurant as a waiter .

The Turkish owner of the Agios Dimitrios souvlaki restaurant had bestowed his speedboat to the 54 year old waiter by private law agreement . The 54 year old on that time was charged and was released from prison a year ago for hashish transfer and seemed to be financially destroyed .

On parallel concept , the 54 year old ( Greek) had developed friendly relations with another employee of the same Turkish restaurant who was found to accommodate in his house. According to documents found and now possessed by the Police, the transfer of Turkish migrants involved and another 50-year old Greek, a restaurant owner in Paleo Faliro, who also was found to keep contacts with Turkish people and who was arrested along with a Turkish 54years old outside the Port Authority of Chios soon after locating the speedboat organizational role in the transfer of members of DHKP-C.

This person ( the 50 years old Greek) had reportedly , according to the same article on Vima contacted the 54 years old employee of the souvlaki restaurant at Agios Dimitrios, on purpose to organize the transportation of the Turkish migrants from Lesvos and Chios to the Turkish coast.

According to the investigations and the officlal information of the Hellenic Police, as the Vima emphasized , immigrants smuggling operation had taken place by them in the eastern Aegean during April 2013. As it is said by the Police also on these illegal Operations was also pre         sent the other Greek arrested, the 22year old of the School of Merchant at Aspropyrgos arrested on the speedboat four days ago. The 22 year old reportedly joined the network of illicit trafficking because he knew, as a friend the son of the 50 year old owner of the restaurant at Paleo Faliro who was also arrested as a participant in the case. 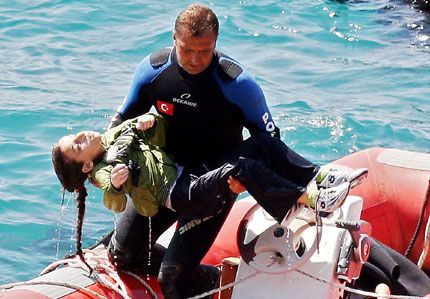 a boat carrying them sank in Aegean Sea off western Turkey on Thursday. August 1, 2013