Greece 2013 Trafficking in Persons Report US Department of State

US  DEPARTMENT OF STATE 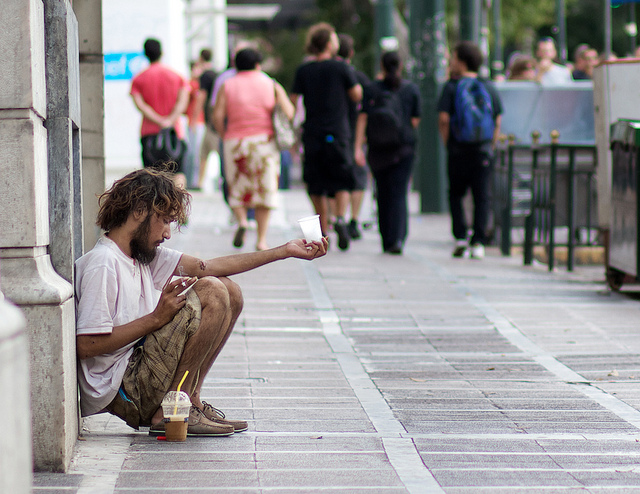 watch out the beggers on your feet:  impossible to imagine the routes and violance to the end of what is humble

Greece is a transit, destination, and a very limited source

country for women and children subjected to sex trafficking

and for men, women, and children in forced labor. Women from

in Asia are subjected to sex trafficking in Greece. Victims

of forced labor identified in Greece, primarily children and

Victims are subjected to debt bondage in agriculture and

Albania and Romania, are subjected to forced labor in Greece

and made to sell goods on the street, beg, or commit petty

theft. There was a reported increase in Roma children from

Romania brought to Greece and forced to work. Roma from

Bulgaria are increasingly brought to Greece on the promise

of employment and subjected to forced begging; children are

transported through the Aegean islands and through the GreekTurkish border in Evros and instructed to file for asylum as Somalis; they are then subjected to sex trafficking in Athens

and other major cities.

traditions, and threats against family to coerce Nigerian

Greece for forced labor and sex trafficking in Italy and other

as victims of trafficking within the country. Asylum seekers

from Bangladesh, India, and Pakistan were vulnerable to debt

The Government of Greece does not fully comply with the

minimum standards for the elimination of trafficking; however,

it is making significant efforts to do so. The government

reporting period and made efforts to train police and the

judiciary on human trafficking issues during the year. While

a lack of proactive investigations continued, there was strong

collaboration between NGOs and anti-trafficking police on

government funding for victim services. There was a continued

need for long-term care for victims of trafficking and shelter

for male victims. The government did not investigate or

prosecute any public officials for alleged complicity in human

trafficking offenses, even though there were allegations of

trafficking offenders, including officials alleged to be complicit

in trafficking; continue to provide training and opportunities

for knowledge sharing within the judiciary to ensure trafficking

offenders are not prosecuted for lesser crimes with lenient

encourage their participation in investigations and

seekers, women in prostitution, and other vulnerable

populations; ensure victims of trafficking are transferred out

of detention to appropriate shelter and protection; increase

the number of official certifications issued to identified victims

reduce barriers to victims’ pursuit of GREECE 181 restitution or compensation;

victims; ensure all victims are effectively afforded a reflection

period in which to recover before deciding whether to

cooperate with law enforcement; and strengthen the central

through a mandate of accountability within the interministerial process.

The government improved its law enforcement efforts in 2012,

convicting an increased number of trafficking offenders and

providing specialized training for the judiciary; trials, however,

continued to be lengthy—with an average of five years in

233/2003 prohibit both sex trafficking and forced labor and

prescribe punishments of up to 10 years’ imprisonment with

These penalties are sufficiently stringent and commensurate

with those prescribed for other serious crimes, such as rape.

Labor actions and work stoppages by judges, prosecutors, and

judicial officials during the reporting period exacerbated the

to bring cases to trial. There were reports of courts failing to

provide interpretation services for trafficking cases and of

to 41 cases in 2011. Six investigations were for forced begging

or labor. In 2012, the government prosecuted 177 defendants

in 2010. Of these, 23 were prosecuted for labor trafficking.

The government convicted 27 traffickers and acquitted 16,

resulting sentences ranged from one to 15 years’ imprisonment.

to pimping, imposing more lenient penalties of up to five

time through payment of fines.

with Italy, Romania, Russia, Albania, and Bulgaria on

trafficking cases. In one such case, 16 Romanians were held

in forced labor picking oranges under debt bondage for their

smuggling journey, having to pay rent to live in a decrepit barn

and forced to buy food from the traffickers at exorbitant prices.

High turnover in the anti-trafficking police unit reduced its

effectiveness of investigations and NGOs reported that police

did not conduct proactive investigations, although police

improved efforts in responding to solid leads provided by

individual knowledge of trafficking and sensitivity in court

to victims’ symptoms of trauma. There were some reports of

corruption among local police and vice officers, who accepted

involved in human trafficking. Despite these reports, the

Government of Greece did not report any investigations

or prosecutions of public officials for alleged complicity in

trafficking-related offenses during the reporting period.

victims of trafficking during the year, despite continued

austerity measures. NGOs did not receive any government

funding to serve victims of trafficking. The government

continued to provide services to victims of trafficking through

for victims of trafficking and other forms of abuse, and two

shelters during the reporting period. Other shelters serving

victims of trafficking were run by faith-based NGOs with

support from international donors. Victims had the freedom to

come and go from shelters. Some small domestic NGOs closed

during the reporting period due to lack of funding. Long-term

care for victims of trafficking was lacking and there was no

shelter available for men. Child victims were served in the

minors, orphanages, or in separate units of adult detention

centers. Many asylum seekers, including unaccompanied

child migrants, were held in substandard facilities and were

not assessed for protection needs, leaving them vulnerable to

but the screenings were poorly implemented and lacked

compared to 97 total victims identified in 2011. Only eight

seven girls were served in government or NGO shelters and

22 victims received repatriation services. Victims who do not

stay in shelters have access to legal services, psychological care,

and law enforcement enabled the government to transfer

of trafficking to border police, coast guard, and vice police.

to be an area that should be improved. The government did not

to 56 foreign victims of trafficking in 2012, which afforded

them the right to obtain employment in Greece—though

accompanied victims to court to provide them emotional

support; however, many victims were unwilling to testify due

to fear of traffickers’ retribution or their desire to return home

before the conclusion of lengthy criminal proceedings. While

victims are permitted to file civil suits against traffickers, the

high costs and protracted delays involved in processing these

There were no reports of victims being prosecuted for acts

committed as a result of their being trafficked during the year.

labor trafficking in jail due to lack of shelter. The government

did not effectively grant victims of trafficking a reflection

period, time in which to recover before deciding whether to

The government maintained its prevention efforts through

help and informed them of their rights and available assistance

regardless of victims’ cooperation with authorities. The

campaign also raised awareness and sensitized the public to the

and punishment for traffickers. The government did not

demonstrate efforts to reduce the demand for commercial sex

with information on how to seek help to potential victims

at border checkpoints and in immigration detention centers.

In cooperation with UNHCR, the government distributed a

booklet in Greek and English to front-line responders with

guidelines on the protection of women and girls in the asylum

process who are at risk of trafficking. In cooperation with

the national action plan against human trafficking; however,

to measure accountability for actions to be taken under that

plan. The government did not demonstrate efforts to reduce

the demand for forced labor during the reporting period.